Though Democrats blocked the the president from bailout funds, he could still benefit from fine print provisions 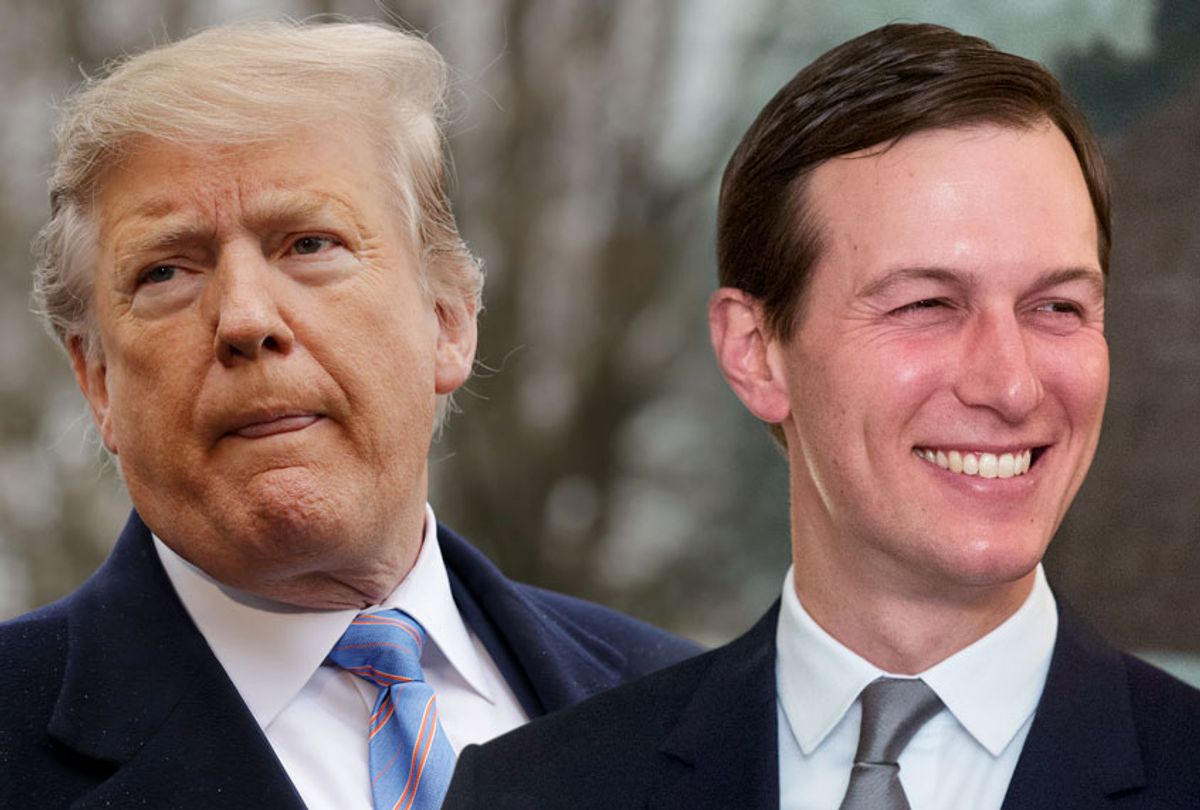 And provisions in the fine print of the 880-page emergency relief bill aimed at easing the economic havoc sparked by the coronavirus pandemic could also directly benefit the businesses of President Donald Trump and his son-in-law, Jared Kushner.

The Senate voted 96-0 to approve the legislation, which is the largest rescue package in history, as the death toll from the new coronavirus surpassed 1,000 in the U.S. The bill includes $290 billion for direct payments to most Americans, $260 billion for expanded unemployment insurance, $500 billion in loans for airlines and large corporations, $367 billion for small business loans, $100 billion for hospitals and $150 billion for state and local governments. The House is expected to vote Friday on the legislation.

Though Senate Democrats carving out a provision to ensure that Trump, government officials and their families do not dip into the corporate bailout fund, the massive bill swelled during negotiations with benefits for special interests, according to The New York Times.

And the provision Democrats included to block government officials and their families from getting bailout funds might not apply to Kushner, The Times reported. It only applies to individuals who "directly or indirectly" control 20% or more of a company, and since the president's son-in-law typically shares ownership with his parents and siblings, he rarely owns that much of his family's businesses.

Also tucked away in the fine print was a provision that would allow a company with multiple hotels to qualify as a small business, even if it has more than 500 employees. Though the provision excludes large brands like Marriott and Hilton, it could reportedly benefit the Trump Organization's small six-hotel chain in the U.S. Several of the company's hotels are members of a trade group, which heavily lobbied for the provision.

The bill also includes a long-sought tax break for restaurants, which will allow them to get an immediate tax refund rather than a deduction over 37 years when they spend money on renovations. The Trump Organization owns a number of restaurants at its properties.

The provisions could allow Trump's companies to get tax breaks and loans for small businesses that would be forgiven if they continue to pay employees, though several of the president's hotels have already laid off hundreds of employees.

The bill also includes a number of other "fine print" measures that were added to the bill after lobbyists flooded the Senate and White House with requests. One $17 billion provision appears specifically targeted at helping Boeing, the embattled aircraft manufacturer Trump vowed to help after the coronavirus pandemic deepened an existing financial crisis caused by deadly technical malfunctions with its planes.

The money is expected to be sent to filers who have provided their direct deposit information to the IRS within three weeks, while the rest of the public would get them soon after, Treasury Secretary Steven Mnuchin said. However, tax experts cautioned that it could take "a month or two" for people to see the payments.

The program also provides $260 billion for what Senate Minority Leader Chuck Schumer, D-N.Y., described as "unemployment on steroids." While states typically limit unemployment benefits to $200 to $550 a week, the bill will provide an extra $600 per week for four months to every laid-off worker. Democrats intended to push to replace 100% of worker salaries in the bill, but negotiators agreed on a flat $600 weekly rate, Mnuchin said Wednesday during a press briefing.

The provision drew complaints from a handful of Republicans, including Sen. Lindsey Graham, R-S.C., who claimed that the heavily pro-corporate bill was too generous to American workers.

Graham, who was joined by Sens. Ben Sasse, R-Neb., Tim Scott, R-S.C., and Rick Scott, R-Fla., argued that the "bill pays you more to not work than if you were working" in some cases.

"If this is not a drafting error, then this is the worst idea I've seen," Graham said, even though Mnuchin and Republicans who wrote the bill said it was necessary to make the program work.

"This was the only way we could assure that the states could get money out quickly and in a fair way. So we used $600 across the board," Mnuchin said. "I don't think it'll create incentives. Most Americans . . . they want to keep their jobs."

As the rogue group of Republicans threatened to delay the vote, Sen. Bernie Sanders, I-Vt., made a threat to block the corporate bailouts pushed for by Republicans.

"In my view, it would be an outrage to prevent working-class Americans to receive the emergency unemployment assistance included in this legislation," Sanders said. "Unless these Republican Senators drop their objections, I am prepared to put a hold on this bill until stronger conditions are imposed on the $500 billion corporate welfare fund to make sure that any corporation receiving financial assistance under this legislation does not lay off workers, cut wages or benefits, ship jobs overseas or pay workers poverty wages."

The Senate ultimately rejected Graham's complaints and approved the bill.

Along with the direct payments and unemployment provisions, the bill would also allow individuals to delay the payment of their payroll taxes for one to two years, waive early penalties for people who need to dip into their retirement funds and provides free coronavirus testing.

The bill will also provide $150 billion to help states make up their budget shortfalls as they scramble to address the crisis, though New York Gov. Andrew Cuomo said the hardest-hit state will receive just $3.8 billion of the more than $9 billion it needs. A House version of the plan offered the state more than $17 billion.

The bill also allots $140 billion to support the U.S. health care system. The money will be divided with $100 billion going directly to hospitals, while the rest is intended to shore up supplies, Medicare payments, staffing and other costly needs.

The rest of the bill is aimed at shoring up the economy by providing loans with corporate-friendly interest rates to businesses. Large corporations such as airlines will be eligible to receive funds from a $500 billion bailout fund from the Treasury Department, which will provide loans and loan guarantees. Fifty billion dollars will go to airlines, and $8 billion will go to cargo air carries. These loans will have to be paid back within five years.

The small business loan fund will provide more than $350 billion to businesses, with fewer than 500 employees to maintain their payroll for up to eight weeks. If businesses keep workers, they can use a portion of the funds to cover overhead costs. These loans will be forgiven if businesses keep their employees.

The House is expected to vote Friday on the legislation, Majority Leader Steny Hoyer, D-Md., said though most members already flew home weeks ago. The House would be able to pass the bill with unanimous consent, even if there are few members present. However, any member can object, which would require a majority of the House to fly back to Washington for the vote.

The House is ultimately expected to pass the bill, which is supported by Trump. Many experts have said the massive stimulus package is only the beginning.

"This should not be thought of as a stimulus bill — this should be thought of as social insurance in a disaster state of the world for the most hard hit," Jonathan Parker, a finance professor at MIT, told Axios. "The idea is to freeze time for a month or six weeks and let people emerge with not a huge amount of debt — not starving, not being evicted."

But as Trump threatens to ease restrictions by early April against the advice of medical experts, former Federal Reserve Chairman Ben Bernanke warned that no legislation would effectively save the economy if the death toll continues to mount.

"Nothing is going to work, the Fed is not going help, fiscal policy is not going to help," he told CNBC, "if we don't get the public health right, if we don't solve the problem of the virus, of the infection, so making sure that the risk has declined sufficiently before put people back in the line of fire."