Limbaugh questions Trump's coronavirus team: "How do we know they're even health experts?" 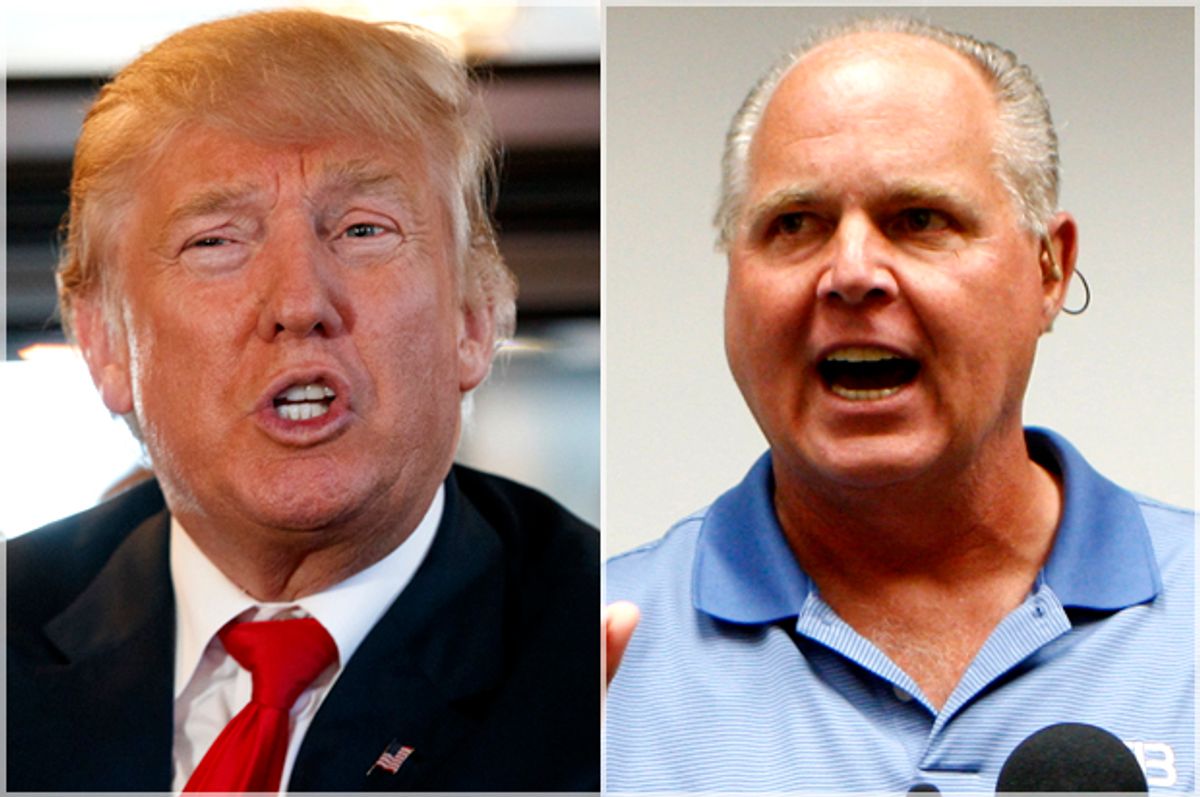 Far-right talk radio host Rush Limbaugh, like President Donald Trump, has been a frequent source of nonsense during the coronavirus crisis: on his February 24 show, he equated COVID-19 with "the common cold." And on Friday, the 69-year-old Limbaugh argued that health officials at the Centers for Disease Control and Prevention (CDC) and the National Institutes of Health (NIH) cannot be trusted because they are part of "the Deep State" and have an anti-Trump agenda.

Limbaugh added, "And how do we know they're even health experts? Well, they wear white lab coats, and they've been in the job for a while — and they're at the CDC, and they're at the NIH…. But has there been any job assessment for them? They're just assumed to be the best because they're in government. But these are all kinds of things that I've been questioning."

Limbaugh, who lives in South Florida, went on to criticize social distancing measures in that part of the U.S.

"I've been watching people routinely accept whatever the authorities say," Limbaugh told listeners. "Where I live, the local town government is driving around town, trying to spot people violating the social distancing ordinances. And when they see it, they publish it on their web site: 'This is very troublesome. We at the town are very troubled by groups of people congregating, violating the social distancing.' Well, what do you think people are going to do? People are not just going to sit around here and stop living."

Limbaugh and Trump have both repeatedly downplayed the coronavirus crisis. Back in February, when thousands of people were dying from it in mainland China, Trump insisted that his critics were exaggerating the threat posed to other parts of the world.

On February 24, Limbaugh insisted that the mainstream media were exaggerating the threat posed by coronavirus as a way of attacking Trump, telling his audience, "It looks like the coronavirus is being weaponized as yet another element to bring down Donald Trump. I want to tell you the truth about the coronavirus. I'm dead right on this. The coronavirus is the common cold, folks."

That day, Limbaugh also told listeners, "The drive-by media hype of this thing as a pandemic, as the Andromeda strain, as, 'Oh, my God, if you get it, you're dead'.… I think the survival rate is 98%. Ninety-eight per cent of people (who) get the coronavirus survive. It's a respiratory system virus."

In late February, Trump told reporters he had a "hunch" that the death rate from coronavirus was lower than what the World Health Organization (WHO) was reporting. And it was also during that period that Trump denounced coronavirus warnings coming from Democrats as a "hoax." Since then, the number of deaths from coronavirus has passed 25,000 worldwide, according to the Center for Systems Science and Engineering (CSSE) at Johns Hopkins University in Baltimore.

On March 11, Limbaugh argued that the cancelations of major events like basketball games and the South by Southwest convention in Austin, Texas were an overreaction.

"Where does this end?," Limbaugh asserted. "Especially when you realize there are diseases out there that kill many more than are being killed by this."