Salon talks to Andre Benjamin and Eve Lindley about their series' heartfelt emphasis: "We need community" 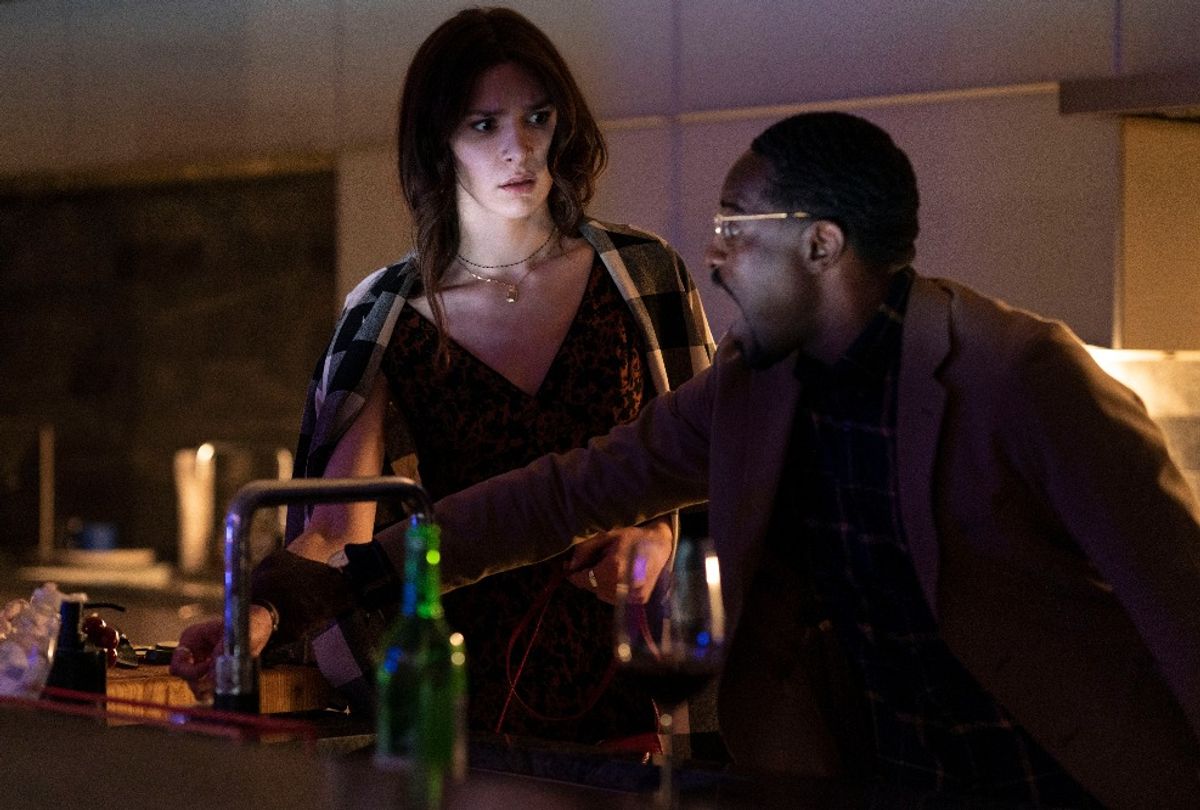 Eve Lindley and Andre Benjamin in "Dispatches From Elsewhere" (AMC)
--

Before sitting down for a scheduled interview with "Dispatches From Elsewhere" stars Andre Benjamin and Eve Lindley, we were made to stand in a hallway along with a group of other people and wait for the  previously reserved space to become available. This is the last situation anyone wants to be in at the end of the long day, which it was, and in a frigid space no less.  Overall the mood was cordial, even though the air itself contained that unseen chafing agent best described as crankiness.

Only for a moment, though. Once it became clear that we were due to settle in to our holding pattern, Benjamin pulled out a large wooden flute and began to play, casting a soothing spell over the vicinity with its infectious calm.

Benjamin, a versatile musician who is half of the hip-hop duo Outkast, did this for his own pleasure. He has no forthcoming album to promote or reason to draw attention to himself. He told me he's simply learning to play, experimenting with new sounds, filling the space of an unplanned pause with a soothing melody that melts away any uncivil inclinations.

That this aligns with the central message of "Dispatches," one that encourages seeing the world differently and creating beauty and hope whenever and wherever you can, is pure coincidence. But this is quite unmistakably "divine nonchalance" in action with a palpable effect.

"I keep loosening up in every interview," said Lindley when she, Benjamin, and I finally sat down together. "I'm no longer very nervous."

Sometimes all it takes to reevaluate the way a particular work interprets the world, be it a mural, an art installation or a TV series, is a change in circumstances.

It was January when Benjamin, Lindley, and I spoke, and "Dispatches" had yet to premiere on AMC. Even then it was evident that this series would have a niche appeal purely based on what it offers. And this theory turned out to be accurate. Measuring "Dispatches" solely by its ratings marks it as a tiny little series, with a season-average audience of around 400,000 per episode – under a third of the average audience for its lead-in "Better Call Saul."

But take into account what it's working with versus most of what's on TV. "Dispatches" is a mystery that doesn't involve a murders, extreme violence or serious threats. The figure at the center of its mission, Clara (Cecilia Balagot), might be a kidnapping victim in need of saving or she might not exist at all.

Instead, hooking into "Dispatches From Elsewhere" requires connecting – empathizing, really – with the richly imagined characters playing along with whatever it is they've gotten themselves into. And the worst that might happen to Jason Segel's Everyman office drone Peter, Sally Field's retiree Janice, Benjamin's obsessive genius Fredwynn, and Lindley's Simone, is that the outcome of the game fails to live up to their expectations.

Benjamin shared that his desire to joining "Dispatches" grew out of a feeling he's had about this moment in his life. "This story is about community," he said. "And I'm at that age now where when I was 25, I could be alone all the time, and it was fun. Cool. But now I'm starting to look around like, 'Okay, I need some people.' That's a common theme right now for damn near every conversation out here right now, that we need community. And that's really what this is about."

Benjamin and Segel had a few conversations long before "Dispatches" came into being that can only be described as existential, he said. "We had really good conversations about, where we were, especially since we had been in careers since we were younger. I think you get to a certain age when you're like, 'Okay, what am I doing now? Why am I doing these things?' And you look for more meaning."

He also found that feeling wasn't just unique to him. "There's some thing happening right now, you know, amongst my friends. Everyone just kind of like, 'What is this? What are we doing?' And I think this speaks to that feeling, in a way."

Peter, Janice, Fredwynn, and Simone are all people who never would have met organically if not for stumbling upon the "Elsewhere Society" and this whimsical experiential adventure.

As the first season of "Dispatches From Elsewhere" moves forward, the audience is made to understand that each member of its quartet previously lived separated from others because that sort of life simply came naturally. Until he finds out about the Elsewhere Society, Peter's days revolve around a job he can't stand and not much else. Janice has an ailing husband at home who requires 24-hour care; her sojourns into the Elsewhere get-togethers provide her with some escape.

Fredwynn and Simone, however, are people whose self-separation is in a means of self-preservation, partly due to the way society sees them, but even more than this, how they assume society views them. With Fredwynn, this manifests as a misanthropic dismissive attitude, in that he assumes that he's the smartest person in the room and that his being Black leads people to underestimate him.

Fredwynn rarely brings up his Blackness save for the instances where it directly applies to the situation, such as a teammate's suggestion of involving the police. Similarly Simone doesn't bring up the fact that she is a trans woman unless it's germane to the conversation – and here, she controls whether that comes up, if at all. What matters is that she's brilliant, brave, and funny, but also vulnerable and fearful of getting too close to anyone.

"What was super-exciting for me was that her queerness or transness never came up in a way that was like a reveal," Lindley said. "It never really comes as a problem or, like. a big reveal. "I hope that people will appreciate that.

Benjamin adds, "It's the world. It's not even like a thing. We're watching a slice of the world, and this is what it is."

In this new world we're in, where millions of people are now "sheltered in place," banned by law from physically connecting with friends and family members, people from around the world are creating virtual bonding experiences to compensation for that loss of in-person interaction.

DJs are hosting streamed dance parties. Learning experiences are going virtual. People have learned not just to live-tweet cultural experiences but see one another's faces, to experience as close to the concept of togetherness as is possible and healthy in the age of social distancing.

And in its own way, "Dispatches From Elsewhere" has been speaking to that need before it was so widely apparent. Working on the show, Lindley said, "opened up a lot of stuff in me and made me want to be better at finding and relying on other people, and being open to receiving love and open to receiving friendship."

"You know, I identify with the character a lot," Lindley added. "She's kind of a loner and I think, kind of like Andre was saying, you don't even realize that you miss community, until you really are missing it."

"Dispatches From Elsewhere" airs new episodes on Mondays at 10 p.m. on AMC.