Trump's tribe of wackos spirals out of control: Threats against Fauci, a deliberate train crash. What's next? 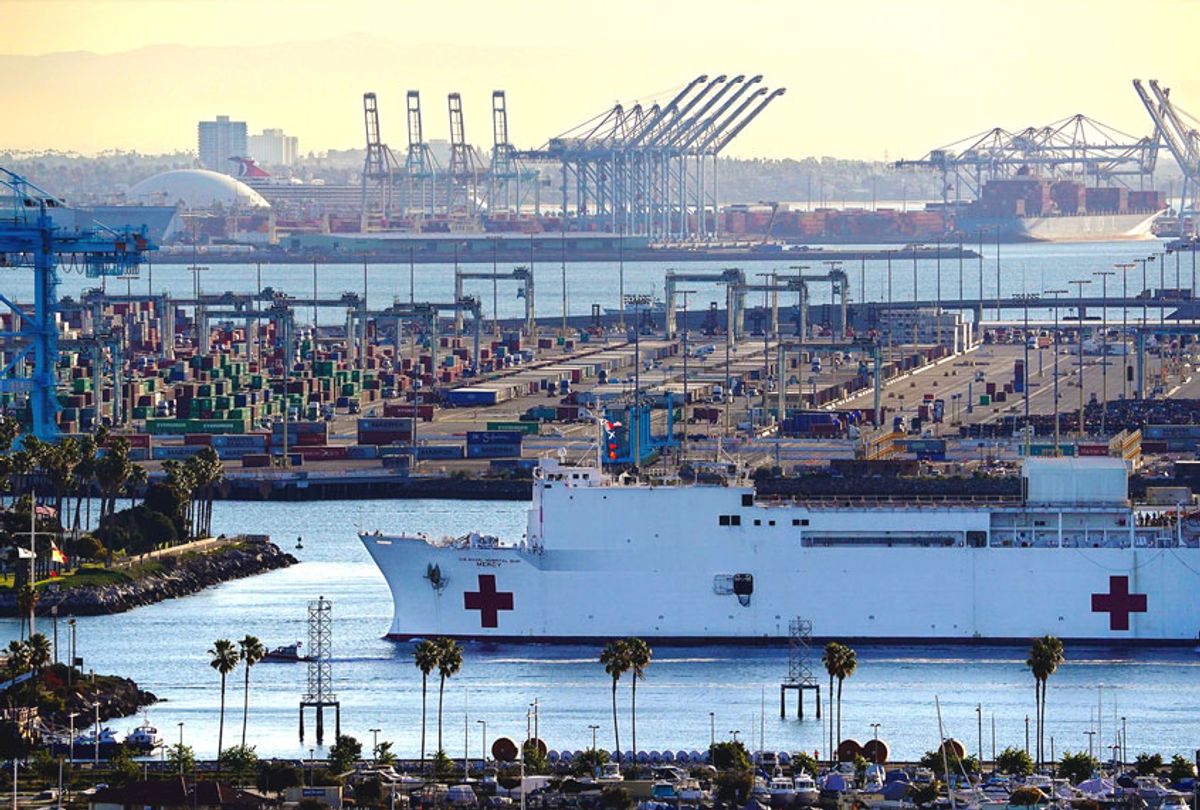 Scenes from an America that was widely infected with conspiracism even before people started getting infected with the new coronavirus:

On Tuesday afternoon, a train engineer named Eduardo Moreno, apparently with great deliberation, derailed the freight train he was manning in Southern California, nearly killing occupants of three nearby cars. His target? The USNS Mercy, a Navy medical ship that's been assisting nearby hospitals with COVID-19 patients.

"I had to. People don't know what's going on here," Moreno reportedly told the officer who arrested him. Apparently, Moreno believes in a conspiracy theory that the coronavirus crisis is a hoax being deployed to cover for a shadowy takeover of the government.

Dr. Anthony Fauci, director of the National Institute of Allergy and Infectious Diseases, has been a stabilizing presence during the crisis, quietly and calmly doing everything he can to correct the firehose of lies Donald Trump has been drenching the country with on a daily basis.

For his service, Fauci now requires a security detail, due in no small part to fanatical Trump fans who have embraced conspiracy theories that paint Fauci as part of a "deep state" conspiracy to unseat Trump by faking the threat of COVID-19.

While Florida Gov. Ron DeSantis, a Republican, refused until this week to face the threat posed by the coronavirus pandemic and dragged his feet about issuing a shelter-in-place order (saying that Trump hadn't asked him to) the city of Tampa was actually taking action with strict bans on gatherings and movement. Rodney Howard-Browne, a Trump-loving preacher who has claimed coronavirus is a "phantom plague" invented to trick people into getting vaccines, was arrested for defying those orders and holding packed church services anyway.

Chanel Rion, a "reporter" from the far-right, conspiracy theory-obsessed One America News Network, was nailed for repeatedly violating the social distancing rules in the White House press briefing room, showing up in the throng on days when she wasn't scheduled to attend. The fact that she was ever invited to the White House should be a scandal all by itself — Rion personally and her network routinely spread lies favorable to Trump — but it quickly became clear that she was getting favorable treatment even under the new, coronavirus-caused limits imposed on the briefing room.

Caught with their pants down, the White House reluctantly told Rion she had to follow the rules.

These four stories are just a snapshot of a growing threat that right-wing conspiracy theorists pose to public health and safety as the number of coronavirus cases grows. (And the rate of growth is now much faster outside New York City, by the way, than in that crowded metropolis.) The threat is twofold, as these stories indicate.

First, there's the threat of the virus itself. Trump-loving conspiracy theorists are desperate to believe the coronavirus isn't real — or at least isn't as bad as the "deep state" is saying. So they're risking their own health, and other people's, by openly defying the public health measures put in place to slow the spread.

So far, at least one such prominent person — a Virginia pastor who publicly called the coronavirus a "mass hysteria" — has died after contracting the virus. Unfortunately, the Trump-inspired middle finger to social distancing rules isn't just a threat to the conspiracy theorists. They're also potentially turning themselves into vectors who can infect ordinary people who aren't willing to put their lives on the line to defend Donald Trump.

Second, there's clearly a threat of violence and mayhem at the hands of conspiracy theorists who, like that train engineer in California, decide to defend their beloved orange leader by taking the fight directly to the "deep state" they believe is faking or hyping this virus.

With 200,000 people infected and nearly 5,000 dead already — and the numbers rising every hour and every day — one might think that conspiracy theorists trying to deny or minimize this virus would be humbled and begin to back down.

Unfortunately, psychology tells us otherwise. When people are faced with evidence that they're wrong and that their entire worldview is false — including the belief that Trump is a great leader — they tend to dig in deeper, spinning out ever more elaborate rationalizations meant to explain that they were right all along and that reality-based people who disagree have sinister motives.

To make it worse, these conspiracy theorists have been constantly empowered and enabled by Trump, who is a conspiracy theorist himself. With his daily tirade of lies, hunches, harebrained theories and baseless speculation, Trump has helped normalize and encourage his followers to just invent reality for themselves. Worse, the fact that he continues to get away with it helps bolster their view that there are no consequences for flouting reality so boldly.

After all, Trump literally attempted to blackmail a foreign leader, the president of Ukraine, in order to boost a conspiracy theory about Joe Biden. (I know that seems like a thousand years ago. It was less than eight months!) Yes, Trump was impeached by the House for those obvious crimes, but he paid no real political cost for it and was acquitted by Republican senators who largely acknowledged that he'd done something wrong and then lied about it. No wonder Trump's followers have concluded they can promote wild, counterfactual conspiracy theories without fearing the consequences, even if people die.

In fact, the Trumpian conspiracy theorists are getting desperate. The "hoax" narrative is getting harder and harder to sell. Indeed, the president himself seems to have given up on that one, admitting that this pandemic is a serious problem. So his acolytes are only going to try harder, lie bigger and take more obnoxious and possibly violent actions, in hopes that going big will allow them to maintain the biggest lie of all — that Trump is a wise and brilliant leader who knows what he's doing.

Add this one to the growing pile of reasons that Trump is to blame for this current crisis. He twiddled his thumbs and lied about the threat for months instead of doing something about it. He continues to screw this up by not doing enough to fight the virus, or to protect the public from the massive economic fallout, which now looks as if it will rival the Great Depression of the 1930s. By being a shameless liar and conspiracy theorist, he laid the groundwork for his followers to react in a way that's presents a massive threat to public health. themselves and others. There is no telling how much worse they will get before this is all over.