Liberal derangement and quarantine madness have made New York's governor a sex-god celebrity. Can't we do better? 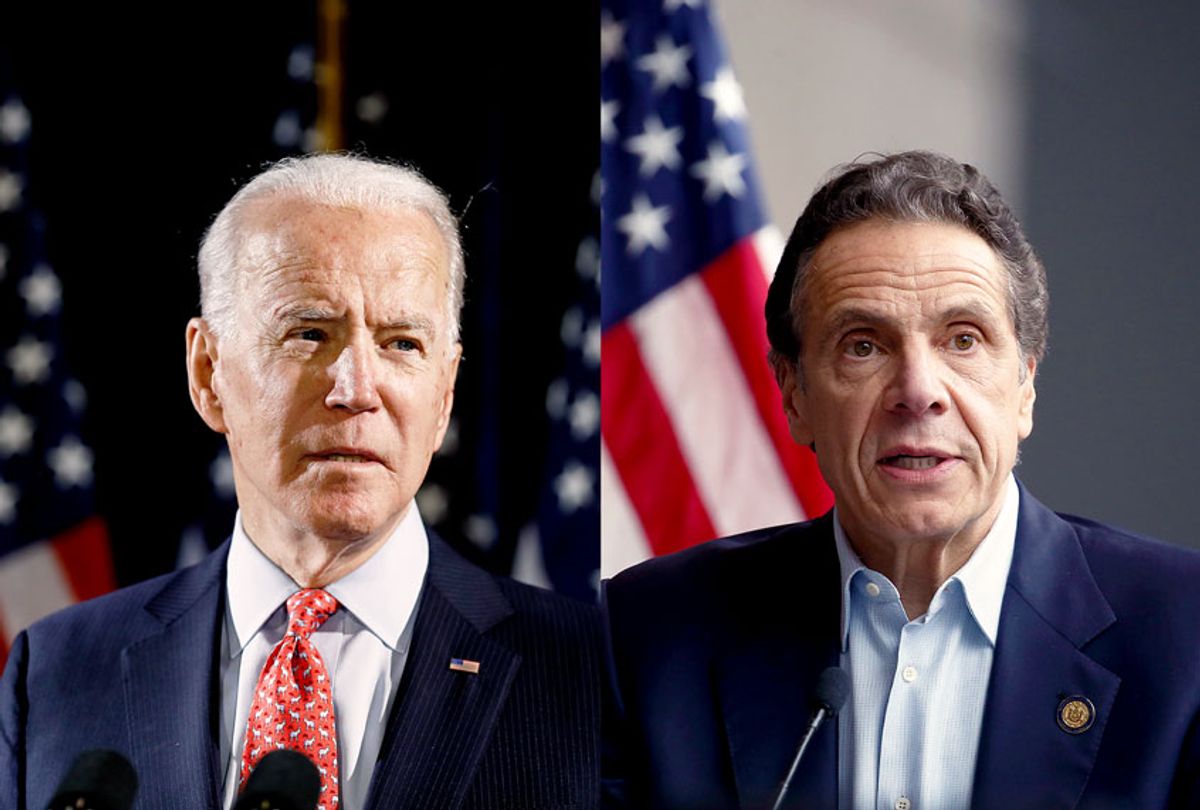 Can we just stop it with Andrew Cuomo already? He's not your boyfriend, and honestly you could do a hell of a lot better. I say that because I care about you. Don't be a doormat!

Whatever the situation is or is not with the New York governor's nipples — and I already regret living in a world where I feel compelled to type those words — is one thousand percent not your business. If I brought up any female elected official's nipples, in any context whatsoever, I would be relentlessly flamed for it, and rightly so. Is it different, somehow, to lech after a male politician in exaggerated public fashion? Sure, kind of. Is it better? I'm not convinced about that.

I get it, up to a point. We've all been locked inside for too long already, and there's a long way to go. We're all "thirsty," if I'm using that term correctly. We all welcome coherent adult leadership and a focus on factual information, especially contrasted with You Know Who's daily seminar in "defining deviance downward" presented live from the White House. (As to that, I obey a clear and simple rule: Don't watch it. The "experience" is not worth having the last particles of your soul sucked out your nostrils into the vacuum of space.)

But it's still OK to have standards, even in the epicenter of a pandemic and even amid an economic disaster that will reshape all our lives. Yes, Cuomo is better than Trump, absolutely. In other news, toenail fungus is better than brain cancer. To look at Cuomo — or, worse yet, at the hapless, drifting Joe Biden, below-average replacement player of American liberalism — and see a savior, a redeemer, a hero, a daddy, a lover, a rescuer is to cling to the last waterlogged planks of a sinking ship. It's a surrender to diminished standards and threadbare hopes. It's an admission that we are so abused and so gaslit, in this era of precipitous American decline, that we believe "any functioning adult 2020" is the best we deserve.

Yes, I watch Cuomo's daily briefings, more mornings than not. Of course I do. I live in New York City, in one of the zipcodes hardest hit by the pandemic. The numbers of new cases every day, and the number of deaths, are nearly impossible for any of us to face. As I wrote last week, the ambulance sirens are rarely silent, in a city where most traffic noise and most commercial activity has stopped. I work in my bedroom most days, in an illusory island of calm, but the knot of anxiety in the pit of my stomach never goes away.

I'm at risk; my kids are at risk; a lot of other people I care about are at risk. Believing that a competent administrator is in charge is immensely reassuring. I look to Cuomo for leadership and clear information, and there's no doubt he has seized the moment and risen to the occasion. He expresses human compassion, he takes responsibility for his decisions, he doesn't sugarcoat bad news and he relies on expert advice when it comes to medical, scientific or logistical matters.

All of that is good! But, you know, not to be harsh: Isn't that the baseline expectation for political leadership — or at least shouldn't it be, in a functioning democracy? Does any of that tell you anything at all about the person's ethical or ideological orientation? (I don't consider "not a cartoon-villain sociopath" to be quite enough information.) If that's a reason to swoon, I would say the swoon has become a sadly debased currency.

Indeed, the Andrew Cuomo who gets crushed on by, shall we say, literary-minded Resistance women of a certain disposition is a projection, not a real person. Maybe that's the point; maybe this is all quarantine melodrama and I'm being overly literal-minded by trying to tether it to the realm of facts. We all need our fantasies, goddess knows. This is not, as you may have noticed, an era when facts have that much purchase on the American mind.

But still. Too much of our national life is now quarantine melodrama and content-free hero worship, stretching back well before we were all in quarantine. To build sexy-daddy fantasies around a brittle, ruthless and decidedly mediocre state governor is way too representative of America's failure of political imagination. It's an artifact of "stan" culture, in which political candidates become celebrities surrounded by cultish circles of fans who tolerate no disagreement and repel all outsiders, rather than combatants in a complex struggle of ideology and semiotics.

Of course Andrew Cuomo's exploding fan base is nowhere near as dangerous or delusional as the fascist death cult around Donald Trump — but the first emerged in direct reaction to the second, which makes me suspect that on a spiritual or psychological level they are not qualitatively different. As Katrina vanden Heuvel put it in a sophisticated and largely sympathetic Washington Post column, Cuomo's "astounding, complex transformation" in the face of this pandemic has temporarily concealed his true political identity as a "transactional leader" relentlessly opposed to redistributive economic policies who "has favored a blunt view of neoliberalism" and "has tried, tirelessly, to persuade us that 'entitlement' is a dirty word."

As Ross Barkan painstakingly outlines for the Nation (where vanden Heuvel was the longtime editor), Cuomo's new state budget will demand billions of dollars in budget cuts, including $400 million in Medicaid cuts this year alone, while refusing to raise taxes on the rich. Yes, he's doing that right now, in the middle of the biggest public health crisis of all our lifetimes. In the words of state Sen. Gustavo Rivera, a Democrat from the Bronx, "It's obscene. These are immoral actions."

Financial journalist Heidi Moore — a bracing and necessary Twitter follow, for many reasons — has been counterattacking on Cuomo mania without mercy, and did so again in a Twitter thread this week after his draconian state budget was released.

Reminder that your boyfriend Andrew Cuomo has reverted to his proto-fascist politics and now that he's won your hearts, is setting about cutting Medicaid for the most vulnerable

I call every lady who said "he's cute" to the stand, what have you to say for yourselves?

I wish I could claim to be a visionary and astute observer of human patterns but this is a simple case of "the scorpion bites, that is his nature." Cuomo has never been other than this.

Please feast your eyes on him as you think of everyone on Medicaid unable to access basic healthcare services.

In the bigger picture, the desperate liberal thirst for leadership that has fixated on Andrew Cuomo, fueled by New York narcissism and the psychic strain of a national lockdown, has very little to do with Andrew Cuomo. It may reflect widespread unease with the fact that the yearlong quest for a Democratic standard-bearer to take down Donald Trump has ended exactly where it began with Joe Biden, the default setting of all default settings, whose long record of semi-unacceptable compromise and center-right triangulation makes Cuomo look like Franklin D. Roosevelt.

Faced with an incipient fascist regime in Washington whose core of support appears unbreakable, the supposed opposition is responding with the most conservative Democratic nominee since at least Harry Truman, an elderly man surrounded by whispers of cognitive decline who faces at least one somewhat-credible accusation of sexual misconduct and has an extensive history of borrowed, embellished or outright fabricated tales about his own past. That's reality, and we're all stuck in the house with it for many weeks to come. We will all need our hopeful fantasies to get through this, and we're all going a little bit nuts. But even when it comes to imaginary love affairs, there's a difference between the ones that nourish us through difficult times and the ones that will inevitably leave us diminished and disappointed.