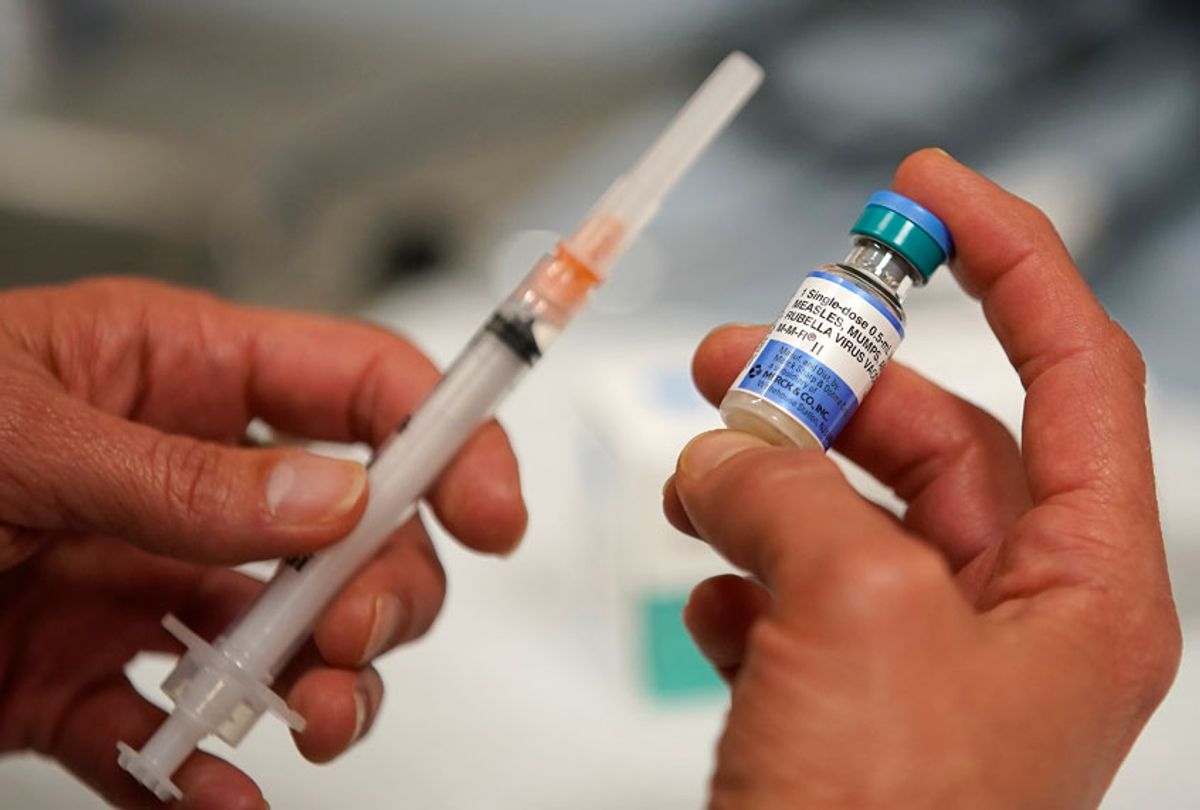 A one dose bottle of measles, mumps and rubella virus vaccine, made by MERCK, is held up at the Salt Lake County Health Department on April 26, 2019 in Salt Lake City, Utah. (Getty/George Frey)
--

A public health expert told Salon that it is unclear whether a single vaccine will be enough to inoculate the general public against the novel coronavirus, noting that those who have recovered from other viruses of the same type (coronaviruses) generally only have "short-term" immunity afterwards.

If true, that would mean the novel coronavirus vaccine would be one that the general public may have to be re-inoculated with periodically. In that sense it would be akin to certain vaccines such as that for pertussis, which only confers short-term immunity.

Likewise, the issue of the mutation rate of the novel coronavirus could complicate the issue further, as multiple strains may require separate inoculations — similar to influenza. Currently, doctors believe that, because there have been no major mutations so far in the novel coronavirus, it could be easy to vaccinate against. (The issue of multiple strains, and the question as to whether a potential vaccine would only provide short-term immunity are separate and unrelated.)

"That's a relatively small number of mutations for having passed through a large number of people," Peter Thielen, a molecular geneticist at the Johns Hopkins University Applied Physics Laboratory who has studied the virus, told The Washington Post last month. "At this point, the mutation rate of the virus would suggest that the vaccine developed for SARS-CoV-2 would be a single vaccine, rather than a new vaccine every year like the flu vaccine."

Other epidemiologists believe that the virus will eventually mutate as it passes from host to host, ultimately necessitating multiple vaccinations for different strains.

William Haseltine — a biologist renowned for his work in confronting the HIV/AIDS epidemic, fighting anthrax, and advancing our knowledge of the human genome — told Salon on Wednesday that he has questions about how coronavirus immunity is conferred.

"The situation is more complicated than either of those arguments," Haseltine explained. "The fundamental question is, what type of immunity does the coronavirus infection engender? Is it lasting immunity or is it short-lived immunity? And for those types of immunity, how broad of a spectrum it is. So there is definite evidence that infection with coronaviruses — SARS and MERS included, and studies with this component of this virus — suggest that infection does induce protective immunity. That's the first thing."

He added, "But the question is, for other coronaviruses, that protection is neither broad nor long-lasting. And there's some evidence from earlier studies with other coronaviruses that re-infection can occur after one year. Now there's a little bit of that, whether it's reinfection with precisely the same strain or a slight variant of the same strain, which means that protection isn't broad and may not be long-lasting."

Salon also asked Haseltine about a recent report from a Los Angeles doctor, Dr. Anthony Cardillo, that he was able to combine hydroxychloroquine with zinc to effectively treat COVID-19 patients. Haseltine had previously told Fox News' Dana Perino that the drug, which is being touted by President Donald Trump (who has a financial stake in a company that manufactures it), is a "quack cure."

"I do not believe him," Haseltine told Salon. "I say he's exaggerating. Either that or he is using a very selective group of patients. But let me say, I tell you what normally happens when you read these papers: What people find is, it is very difficult — especially in the early stages — to tell whether or not hydroxychloroquine is having an effect. The major reason for that is that most people, 80% of people and resolve normally. So 80% of cases, if you don't test them, if you give them water, they're going to recover. How do you know whether your drug is having an effect? Unless you have a very large controlled clinical trial, you're not."

He added, "Anecdotal evidence does not cut it. 10 patients, 20 patients, 30 patients, it doesn't cut it. You need a large controlled study and you need to introduce the drug at different stages of the disease. When people are fully healthy, do they progress when they're beginning to get ill? Does it shorten the progression? Does it change the course for a large numbers of patients?"

In an interview with Salon last month, Haseltine criticized Trump's handling of the pandemic.

This story was updated on April 11 to reflect which comparable vaccines confer short-term immunity.