Trump fails the test: Yet more evidence he has no idea what he's doing 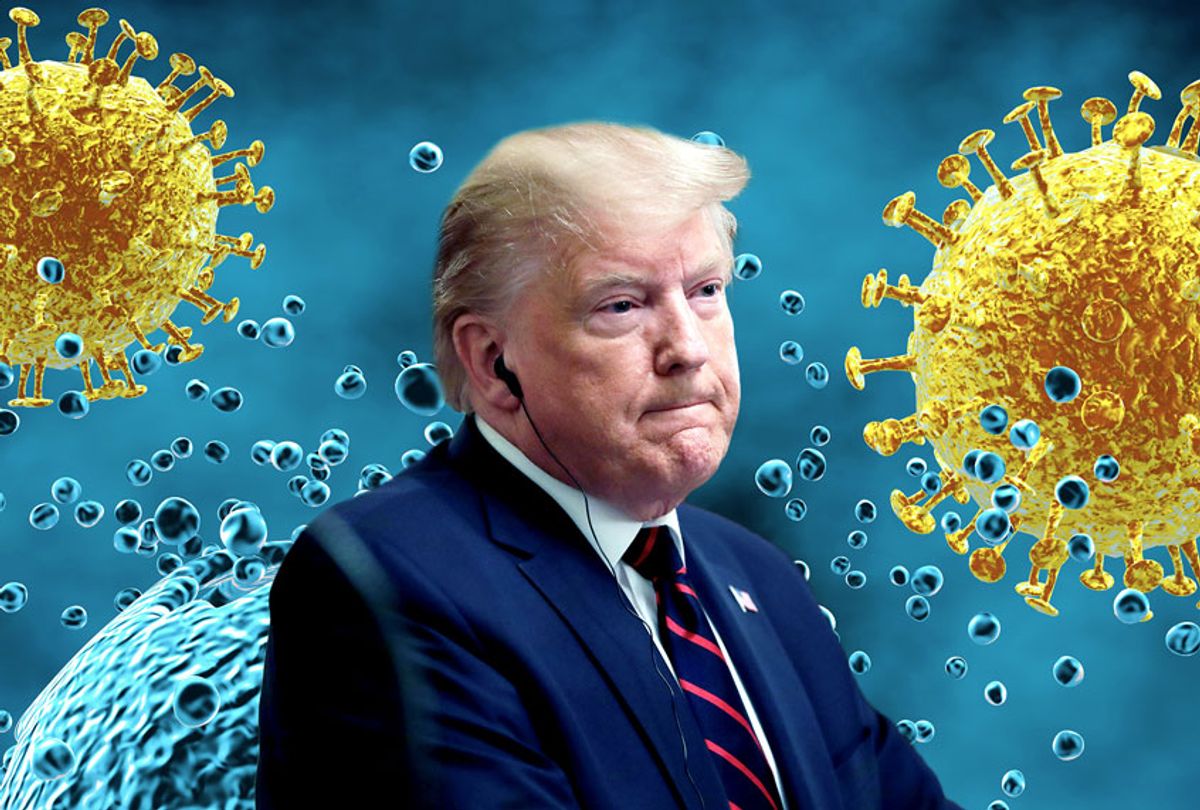 Donald Trump made it clearer than ever on Thursday evening that he doesn't understand the crucial role that widespread coronavirus testing plays in getting America back to work again safely.

So while he talks about reopening the country "very, very soon," what he's actually showing the world, every night, is that he has no idea what it will take to do that.

The overwhelming consensus among public-health experts is that it won't be safe for Americans to resume anything like their normal lives until the country has the ability to test magnitudes more people than it does now.

Social distancing appears to be reducing the uncontrolled spread of the virus. But if we can't figure out who still has the virus and keep them away from healthy people, then when we emerge from our homes, we'll just start the cycle over.

What's required, first and foremost, is massive testing — not only vastly more diagnostic testing than we're doing now, but also what's called "surveillance" testing, so public-health officials can determine what communities are safe and can identify outbreaks when they are still small and isolate the people who are infected.

Barack Obama weighed in on Thursday. He gets it:

A former Obama adviser put it a bit less delicately:

Indeed, there is no sign that Trump — preoccupied as he is with a fantasy narrative in which he and his administration have done everything perfectly — has a clue that testing needs to be ramped up.

Before you read Trump's entire reply, you need to know a few things to help you understand how meaningless it was:

Acosta: But people can't get the test right now —

Trump: — there are certain sections in the country that are in phenomenal shape already. Other sections are coming online [sic]. Other sections are going down. And we, in addition to that, are giving out millions of tests and every day we're doing it exponentially, we're picking up, and what we'll be doing in the very near future is going to certain areas of our country and do massive testing. It's not necessary, but it would be a good thing to have.

Acosta: Don't you have need, though, Mr. President, to make sure people are safe going back to work?  You don't want to send people back to the workplace —

Trump: We want to have it. And we're going to see if we have it. Do you need it? No. Is it a nice thing to do? Yes. We're talking 325 million people. And that's not going to happen, as you can imagine. It would never happen with anyone else, either.

Trump's mention of "massive testing," but only in "certain areas of our country," was confusing at best and nonsensical at worst.

At Wednesday's news conference, Trump was asked another good question: "So what specifically has to happen for you to feel that it is safe to reopen the country? And what is your plan to do that?"

His answer was purely "aspirational" — as he now calls his earlier, Easter Sunday deadline for reopening:

Well, I think we can say that we have to be on that down side of that slope and heading to a very strong direction that this thing is gone. We could do it in phases. We can go to some areas, which, you know, some areas are much less affected than others.

But it would be nice to be able to open with a big bang and open up our country — or certainly most of our country. And I think we're going to do that soon. If you look at what's happening, I would say we're ahead of schedule.

Asked about plans for "monitoring and testing," Trump lied about the current level of testing and almost certainly made up a story about how "other countries" are now "calling us" for advice.

Public-health experts are widely agreed on what needs to happen next, starting with a huge increase in testing but also including a massive nationwide program of contact-tracing to find who may have been infected by the people who tested positive, and some way of isolating the infected.

Each of those measures involve controversial tradeoffs, and complex federal oversight and support.

That's what ought to be preoccupying Trump.

Specifically, scientists I trust have directed me to three policy roadmaps that provide exactly what the Trump administration is failing to provide: a detailed, point-by-point plan for how to reopen the country and end the crisis safely. They are also nearly identical in their broad strokes.

Reporters should hold Trump accountable to these roadmaps: Does he disagree with any of their conclusions or proposals? What if anything is he doing about them?

All three emphasize the danger of not having a serious, credible plan. As the CAP report states:

Without a coherent, evidence-based plan in place — a path forward, clear benchmarks, and an end in sight — the public and government officials may grow weary of physical distancing prematurely. The result would be repeated waves of exponential transmission followed by lockdowns, wreaking havoc on the economy and peoples' lives. It will be far more devastating to our economy — and to public health — to experience waves and waves of virus response rather than properly return to normal when it is truly safe. Americans are willing to make sacrifices and do their part to break transmission, but they need to have faith that there is a plan in place that will work.

The next step, as the AEI report explains, is:

That's where widespread testing becomes essential. But as the Duke report states:

Not one of the 50 U.S. states currently has surveillance capabilities sufficient to enable case-based interventions at the necessary scale. While these capacities are being scaled up in some places around the country, getting them to a level adequate to mitigate the risk of future outbreaks and epidemics will require a substantial expansion of our public health infrastructure and case-based management capabilities. With Federal support, surveillance mechanisms can be increased or implemented and better integrated with testing by providers.

None of this can happen just by flicking a switch, however. From the Duke report:

A reasonable first approach is to support rapid pilot program in some regions of the country that are already supporting existing surveillance capabilities. For example, Massachusetts recently announced a new program to hire and train 1,000 people to support contact tracing. Successful early models and best practices would provide the basis for CDC's guidance to expand these capabilities throughout the country.

Finding a balance between the personal and technological approaches to contact-tracing is essential, and presents a rare area of disagreement.

The CAP report, for instance, urges an approach like South Korea and Singapore, using mobile phones to notify individuals if they have been in close proximity to an individual who has tested positive — but with data hosted by a trusted, nonprofit organization, "not private technology companies or the federal government."

The Duke report, by contrast, concludes that a reliance on phones raises "serious privacy, security, and logistical concerns," and instead recommends a substantial investment in strengthening the state and local public health workforce and a system for timely data-sharing.

The experts are agreed that affected individuals should be isolated, often outside of their houses. The AEI report says, "Comfortable, free facilities should be provided for cases and their contacts who prefer local isolation, quarantine, and treatment away from home."

Is anyone at the White House paying attention?

Only the U.S. government can set up the necessary testing network. Only the CDC can lead an effective contact-tracing program.

And ideally, the White House could lead a constructive national debate about the appropriate role of cell phone data in contact tracing and the right approach to isolating the sick.

Despite Trump's belligerent ignorance, there are some signs that Vice President Pence and other members of the White House task force are at least a bit more aware of the variables involved — but how much isn't clear.

Pence, after Trump left the room on Thursday, talked in very general terms about what needs to happen before places reopen. "First would be that we are at the end of the coronavirus for most major communities," he said. He said that "as we move into this summer and move into the fall, we'll have the testing we need" to do both diagnostic and surveillance testing.

But he also said reopening depends on having "therapeutics for Americans to take medicines if they contract the disease" — which, unless you believe Trump's snake-oil pitches for hydroxychloroquine, isn't necessarily anytime soon.

On CNN, the mostly invisible CDC director, Robert Redfield, offered a little more insight on Thursday evening, acknowledging the need for contract tracing and "using the data that we have from surveillance to understand the most important places for us to reopen."

According to Politico, Dr. Anthony Fauci, the nation's top infectious diseases expert, told lawmakers earlier this week "that administration officials are developing a framework for getting back to 'normality' and that he expects the White House to issue more guidance about eventually reopening society in the coming days."

On Wednesday, Brett P. Giroir, the assistant secretary for health at the Department of Health and Human Services, discussed movement toward antibody testing. "This allows for surveillance screening … to understand if 1 percent, 5 percent, 30 percent of Americans have been infected. But it also allows us to have very widespread — tens and tens of millions of people screened with a finger prick on the spot."

He predicted that "if things work out the way we believe they will, we will have millions [of tests] on the market by May — in a sophisticated way, in a prospective way — that we get the surveillance we need. We can test people to see if they've been exposed, immune, and [can] go back to work. And a combination of that kind of test with the current kind of tests we have now is how America opens back up again."

Meanwhile, Trump continues to be obsessed with his TV ratings, not testing. He continues to insist, vaguely, that everything will be better soon.

Everyone knows that the President knows nothing, and is just doing what he hopes, rather than what is realistic. What they want is what's realistic. It's, "Tell me what the plan is over that time."…

I think I have a plan. There are other people who have slightly different plans, but we have to have a concerted discussion going forward.

The media's role here is essential. Every time Trump says things are "headed in the right direction," reporters should be demanding answers to specific questions about the plan forward — and should make it clear to the public that he has no serious, concrete, plausible or credible plan at all.

Reporters need to expose his ignorance, rather than continue to indulge him — like the Washington Post's Matt Zapotosky, Josh Dawsey, Jose A. Del Real and William Wan did Thursday night, in their story headlined "Trump administration pushing to reopen much of the U.S. next month."

Read all the way down and you learn that he can't do it (only the governors can); that health experts say it would be completely crazy; and that no one in Trump's inner circle can answer the simplest questions about how this could possibly be safe.

But Trump — and the zealots he listens to inside and outside the White House — got the headline they wanted, nonetheless.