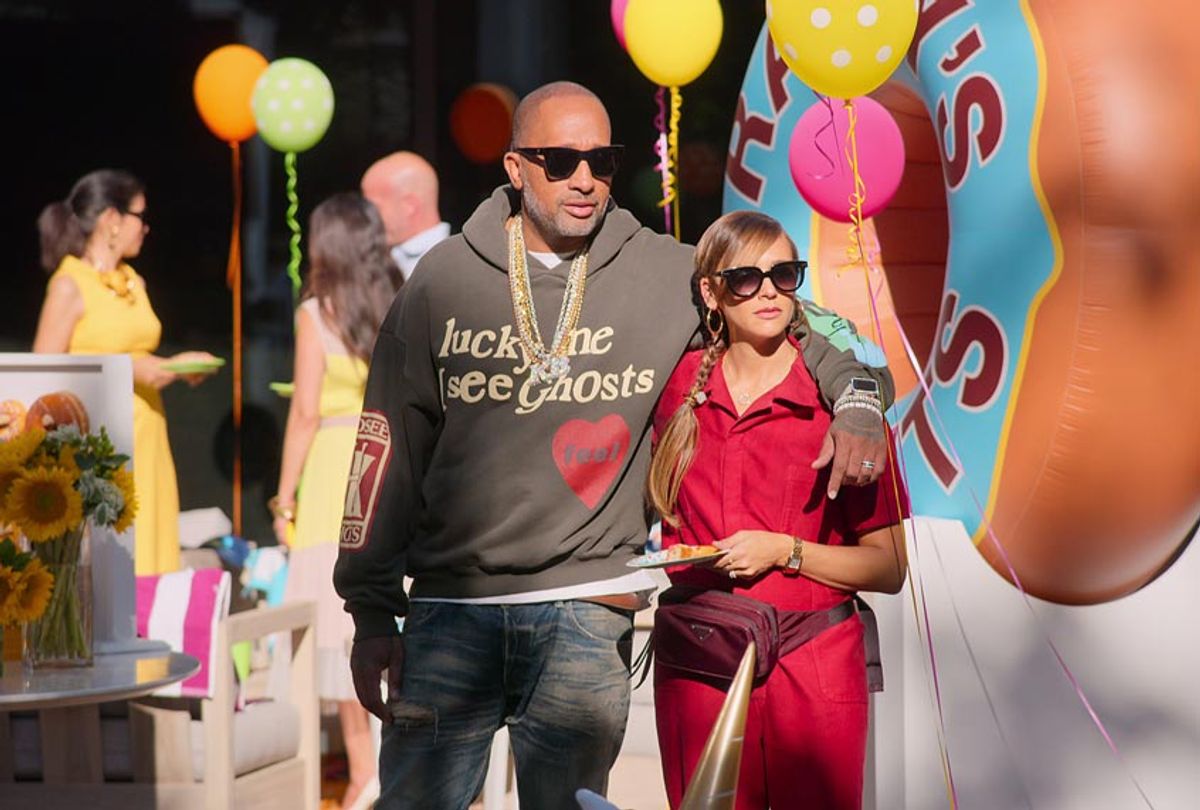 In the fifth episode of Kenya Barris' Netflix series "#blackAF," the "Black-ish" creator-turned-star of his own series encounters a work by a Black filmmaker that he deems to be . . .  not good. He's not alone in that opinion. His TV daughter Drea (Iman Benson), an aspiring director, is similarly appalled.

To their combined shock, Kenya and Drea appear to be the only ones who hold that view. Critics express near universal acclaim for the movie. His extended family of average, run-of-the-mill black folks from Inglewood rave about it after he privately screens it for them. Even his wife Joya (Rashida Jones) likes it, leaving father and daughter utterly baffled.

All this tumbles Dre – sorry, Kenya – into a dark crisis of the soul, especially after he gets a mostly white group of industry professionals to admit to him that the film is, indeed, a mess. They also admit that nobody will say that out loud for fear of being seen as unsupportive of a Black creative.

And while this particular episode is Barris' way of exorcising his egocentrism, it also, perhaps unintentionally, speaks to the puzzle some critics  – ok, me, I guess? – might be shaking around in their brains. How does the creator of a new and frequently funny, scathingly self-critical Netflix series square himself with the fact that he's rehashing many if not all of the themes he's taken on in "Black-ish"? You know, the broadcast sitcom that is now in its sixth season and cemented his status as a TV mogul?

Does Barris' brutal, comedic exaggeration of his own narcissism, delivered with pointed accuracy in the show's dialogue, compensate for the fact that his talents are best realized from behind the camera, not in front of it? Is his lack of expressiveness as an actor enough to deflate the show's overall quality score?

What I'm saying is, in order to recommend and enjoy "#blackAF" am I somehow obligated to get over the fact that it is an entertaining but wholly unnecessary indulgence on the part of a producer who places himself at the center of a talented ensemble actors, even though he really can't act?

Did I just say that out loud?

Let's back up for a second here and note that plenty of dead-on-target punchlines ripple throughout "#blackAF," a series whose entire raison d'etre is announced in the title. No equivocation here, no "ish," and please don't pretend that you don't know what the A and the F stand for. This is Barris' way of letting the viewer know that his streaming series the honest, unfiltered version of "Black-ish" that he wanted to make. The difference – well, one of them – is that now there's no need to be sheepish about what the show is or who he is.

Attitudinally, this is a vast leap from 2014, when "Black-ish" joined the ABC schedule in 2014 and its title led to a great deal of dismay and handwringing. Back then we were still telling ourselves that ours was a post-racial society, and nobody was supposed to talk about race anymore.

Folks assumed the worst. Then "Black-ish" actually debuted and the world saw . . . a sitcom. Anthony Anderson's Dre is a successful professional married to another successful professional, Tracee Ellis Ross' Bow. They're raising a passel of kids. But these sitcom parents contend with bringing up black children in a world that treats them differently, regardless of the privilege with which they were raised.

And Dre and Bow constantly confront whether, in their financial and social success, they've grown too distant from their own cultural identity . . . however that is truly defined.

Conversation-starting episodes such as "The Word," "Juneteenth" and the cathartic election clapback "Lemons" voice frustration, opinions, and answers Americans are still unwilling or afraid to discuss honestly with one another. And the show's critical success spawned spinoffs, including Freeform series "Grown-ish" and the prequel "Mixed-ish."

This makes "#blackAF" the very rich relations to the other series, with Barris portraying a parody of himself, and examining what it means to be him – a Black man, yes, but also a producer, director, and $100 million winner of the Netflix overall deal lottery.

"Black-ish" parents Dre and Bow, you see, are merely well-off. But fictional Barris and his Joya are rich, bitch! We're talking white help, rent-a-small-private-island-to-take-your-family-to-lunch rich. Complaining about being subjected to the "white gaze" and questioning one's blackness even as they keep their regular-Black-folks relatives at arm's length rich.

And with such a mountainous, hard-earned boon comes the curse fictional Kenya insists that fate foists upon Black millionaires like him: the constant reminder that while he may have arrived, white people will always question how and why he got to the party, and whether he deserves to be there at all.

Since this is "#blackAF" and not "Black-ish," however, Kenya and Joya don't firmly but patiently school the benevolently ignorant. They flog them with displays of their wealth and sky-level social status. Yet the pleasure they take in this is fleeting; money may buy them the company of others, but neither has friends they'd consider to be reliable.

Drea, who explains away the series' (done to death) faux-documentary approach by framing it as her application submission for New York University's film school, describes her father as "an expensively dressed miserable person." Later, she refers to him as a "race profiteer" and "a one-trick pony," and likens both her parents to the Menendez brothers "when it comes to pettiness, fiscal irresponsibility and basically being on the same page about the wrong s**t."

She even rolls her eyes at the high production value behind her supposed college application submission. Her father's ridiculous, over-the-top largesse is to blame; instead of allowing her to film their family in the style of an indie documentary producer, he's hired her a crew.

Later, however, she steps back for a moment and takes a hard look at her own privilege. "Maybe I am an a**hole," she posits. Maybe. Remarkably, though, it is Barris who is writing those words, and for the most part, he's referring to himself.

Larry David's fans and viewers of "Curb Your Enthusiasm" have by now noticed that  "#blackAF" is pulling a lot of the same moves as the "Seinfeld" co-creator does with his HBO series. But instead of griping about how the world inconveniences him, fictional Kenya obsesses over how the world sees him – specifically, the unfair weight and scrutiny of the white gaze.

The joke as Barris interprets it, isn't that said viewpoint isn't real, it is that has twisted him into a kvetching egotist. Never mind that a career that includes co-creating "America's Next Top Model" and writing the script for the sleeper hit film "Girls Trip," has earned him the right to purchase couture-branded athleisure wear or a flashy sports car.

He has to do these things, he explains, because of slavery. White producers can virtue signal by driving around in their Priuses, and Matthew McConaughey makes it OK for them to slum it in Lincoln luxury sedans. But hyper-successful Black celebrities are obligated, you see, to flash their wealth by way of their bespoke track suits. Kenya clings to his ostentatious gold chain, he explains, because of that phrase – which appears in every episode title of the first season. He's also slightly embarrassed when white people compliment it.

Joya does her level best to bring him closer to Earth. At the same time, she's also torn over how she's perceived as a biracial woman, her dissatisfaction at putting aside her career as an attorney to raise their six children in the lap of luxury and . . . you know, everything you've already seen before in Barris' other shows.

"#blackAF" doesn't place those sorts of expectations on Drea and her sisters Chloe (Genneya Walton) and Izzy (Scarlet Spencer), or their younger brothers Pops (Justin Claiborne), Kam  (Ravi Cabot-Conyers) and Brooklyn (Richard Gardenhire Jr.). Instead, the kids exist to demonstrate the wages of their parents angst or to generally behave precociously or terribly . . . very much in the vein of every standard sitcom non-adult.

I suppose it's enough to celebrate the fact that a Black TV producer has hit the level of influence that David enjoys, in that he has put out a show where he gets to pretty much present himself as a character worth knowing and watching. It's not even a crime, I suppose, to release a derivative sitcom that plagiarizes from your own past work.

Kenya acknowledges this in a thoroughly self-centered meta-moment when, in the midst of a strained period in his marriage – and during a vacation to Fiji – he watches an episode of "Black-ish" and learns from his own message, marveling at how good his own show is.

This occurs during the two-part season finale of "#blackAF," and by that point you're either completely in on the joke, or have at least accepted its shortcomings enough to enjoy the lines that Barris has written at his own expense. But if you don't quite make it there, never mind. Barris is committing enough self-flagellation for the entire culture by way of an upscale reprise of past TV acts, and we are under no obligation because of anything to bear witness.

"#blackAF" is currently streaming on Netflix.