In “Selah and the Spades,” black kids run their world and don't face consequences

"I was tired of seeing black people get caught," Tayarisha Poe says about her new boarding school-set Amazon film 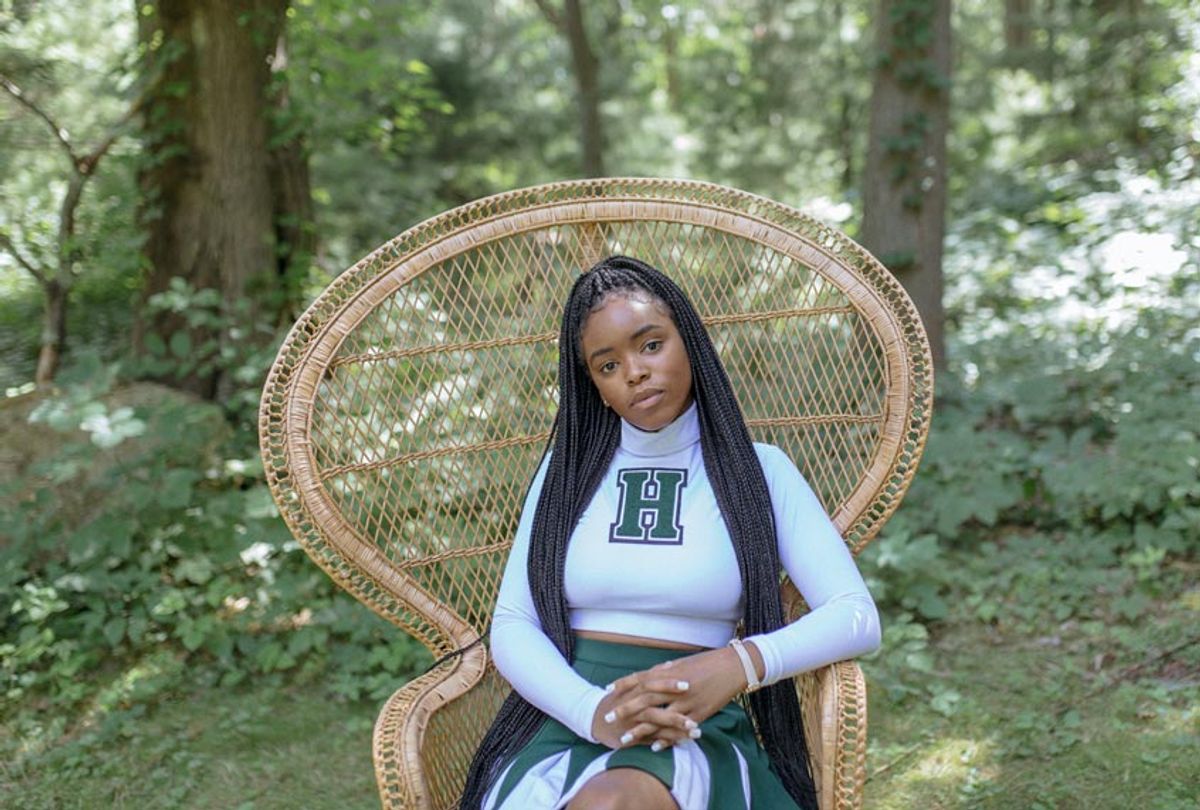 Selah and the Spades (Amazon)
--

Few onscreen playgrounds allow black youth to be wild and free without punishment. However, "Selah and The Spades," Tayarisha Poe's feature film directorial debut, gives space for black teens to go through growing pains, shift through emotions, and make bad decisions without consequence. The film first premiered as a NEXT selection at  Sundance last year and makes its way to Amazon Prime, joining the slew of other movies available to stream in April. Poe creates this space Haldwell, a fictitious Pennsylvania boarding school, as the backdrop for viewers to get a glimpse into the high school senior Selah's carefree life.

Like the novel "Lord of the Flies" the youth at Haldwell govern themselves. They are controlled by five student body factions: The Spades, The Seas, The Skins, The Bobbies, and The Perfects factions. Selah (Lovie Simone) runs the most prominent of these, The Spades, who are a group of drug dealers. Along with Selah, the film focuses on her right-hand man Maxxie (Emmy winner Jharrel Jerome), and their newest recruit, Paloma (Celeste O'Connor). Throughout the film, viewers get an intimate view of the experiences of black kids in a boarding school environment, while also focusing on Selah. As the most popular girl in school, she knows she has power, but throughout the film, she learns what she's willing to compromise for that power.

This power struggle is explored as Selah mentors Paloma, a transfer student who is an observant free-spirited photographer. Selah is graduating soon and hopes to train Paloma to follow in her footsteps. Viewers get to know Selah as a popular mean girl who leads both her cheer squad and The Spades with manipulation and perfectionism. As the film progresses, Selah finds herself in constant conflict with her identity, struggling to reconcile the straight-A student she presents to her mother, with the cool street boss she presents to her peers.

This imaginative world doubles as a journey into Poe's truth of coming of age without the burdens of historical traumas weighing into her everyday decisions as a black student in boarding school. Poe shares with Salon her experience attending boarding school, creating a film where the black kids get to misbehave, and the process of getting a film made without a historical trauma-based story arc.

What sort of high school did you attend? Were there secret societies in your high school like in the film, and if so were you a part of one?

I grew up in Southwest Philadelphia, around Baltimore Avenue, where I spent most of my childhood and my 20s. I went to The Peddie School, a boarding school in New Jersey. We had this secret society at my high school, it was called the Secret Society of Eight, and you were invited in by someone who was about to graduate. The whole point of this secret society was to do good things for people on campus. If someone had a game the next day, then we would decorate their room, get them a cake, or just something sweet. During finals, we would go around delivering candy.

What character in the film best reflects who you were in high school?

I have been both a Selah and a Paloma; that's why I wrote this story because I felt as though the Paloma parts of myself were a lot easier to digest and a lot more acceptable, being the shy, observant, outsider, having a good time, but not too much. I felt as though the Selah parts of myself were the ones I had to keep intact especially in mixed companies.

I got sick of feeling like being a young black woman required me to reconsider how I presented myself. So I view Selah as being really emotional, and having a lot of emotions and not knowing where to put them,  knowing that you need to have power and not knowing exactly why, or what you are doing to keep a hold of that power is worth the power itself. I was both Selah and Paloma in high school.

Usually, a story like "Selah and The Spades" centers on a character like Paloma. You would be entering this new world and learning about the various factions through her eyes. However, you chose to center on Selah instead. What informed this decision?

From the beginning, I knew that I wanted to tell a story from the other person's perspective and that power relationship. The person who is the teacher instead of the student, because I felt as though especially at that age and especially being a black girl, and having darker skin, that character is typically painted as the villain. I have grown up spending most of my life seeing movies where that character is the villain and having to write my version in my head where she is not the villain. After doing that enough times. I thought maybe I should just write a movie where she is not the villain.

As the film develops you see the interaction between Selah and Paloma shift, as Paloma obtains more power. What were you trying to communicate through this?

From the perspective of Paloma, it's interesting the closer we get to something we deem to be beautiful changes the closer we get to it. I was interested in seeing how Paloma's interactions with Selah changes as Paloma's power grows. The part I like about Paloma's character is I don't think she views Selah as less important because Paloma has grown into her power more.

Paloma is pretty chill when Selah is still in charge and has all of the power. Paloma's attitude changes as she grows in her power, and then on the flip side, the thing that is more interesting to me is seeing Selah, someone who is used to this powerful beautiful world and this very privileged microcosm of society that she exists in, what does that same beauty look like through her eyes? What do these things feel like through her eyes because for us it feels like a fascinating and cool world? It's all about the reality of how it feels for Selah as opposed to the reality of how it is.

What prompted you to construct this narrative around black kids getting away with alcohol and drug dealing?

Quite seriously, I was tired of seeing black people get caught. There are a lot of great films coming out right now that are presenting blackness through a view that isn't presented through whiteness, so it's allowing black people and black characters to just be themselves, and exist within their own worlds, and not at every turn confront another aspect of white supremacy.

As an audience member, I really love these gangster movies and shows. I love "The Godfather'' and "Breaking Bad," these stories about older white men doing really bad things and like reasoning it away as though it's for the greater good when they are just doing it for their ego. I love those stories and I really relate to them because I'm interested in what we are willing to tell ourselves to excuse our own behavior.

It's not fair that people who look like me don't get to get away with things. It's not fair that we get caught and wound up shot by the cops, I'm sick of it. I think it's damaging because it's such a limited perspective of black people. I really wanted to make a story that was not told through the white gaze, or for the white gaze. I'm trying to make films for myself at the age of 15, and I'm just trying to think about what would have been the ball for me because being a teenager is hard.

What prompted you to write about these younger years of your life?

What started me writing that story was just this desire to see somebody who looked like me and felt like me, but who got to live a life however they wanted, no matter the consequences and they just kept doing that. That's why I wrote, "Selah and The Spades" because the last time I remember feeling that sort of unlimited potential and freedom was when I was a teenager, that's a period of time when we really begin to solidify the boundary that is ourself and the personality of who we are.

[Editor's Note: The following portion of the interview contains spoilers from the ending of "Selah and the Spades."]

Tell me why you chose to end the film with them having a prom in the woods, where Selah drugs Paloma, and Maxxie and Selah go running after Paloma?

I think for Selah there's this realization of what could have happened if they had not stopped Paloma or had not been there to help Paloma up. I think for Selah her focus is the potential negative consequences of her actions and that's why she seems as though she disconnects from her reality, and she is super focused on what is over that ledge. She is beginning to realize, "When I do these things I cannot always control the outcome and that is why I should not do these things." Selah is focused on the consequences of her actions for the first time in a really long time in her life.

Was it hard to get this sort of film greenlit, because it doesn't exist within any sort of historical loglines of what black people have historically shown up as in films?

It was very difficult to get to the right place until we did this thing called Sundance Catalyst, where we were able to meet our lead producer Lauren McBride, and pitched the film to an auditorium of investors, and that kind of changed our trajectory in a major way because it seemed to a lot of people like an impossible idea. They couldn't understand why she didn't get in trouble. I think it took me, a black woman and another black woman standing on a stage and shouting, "You already like these films; you just want them to be white men. We are all seeking these questions of morality, but we are only willing to afford that complexity and that ambiguity to white men."

"Selah and The Spades" is currently streaming on Amazon Prime.