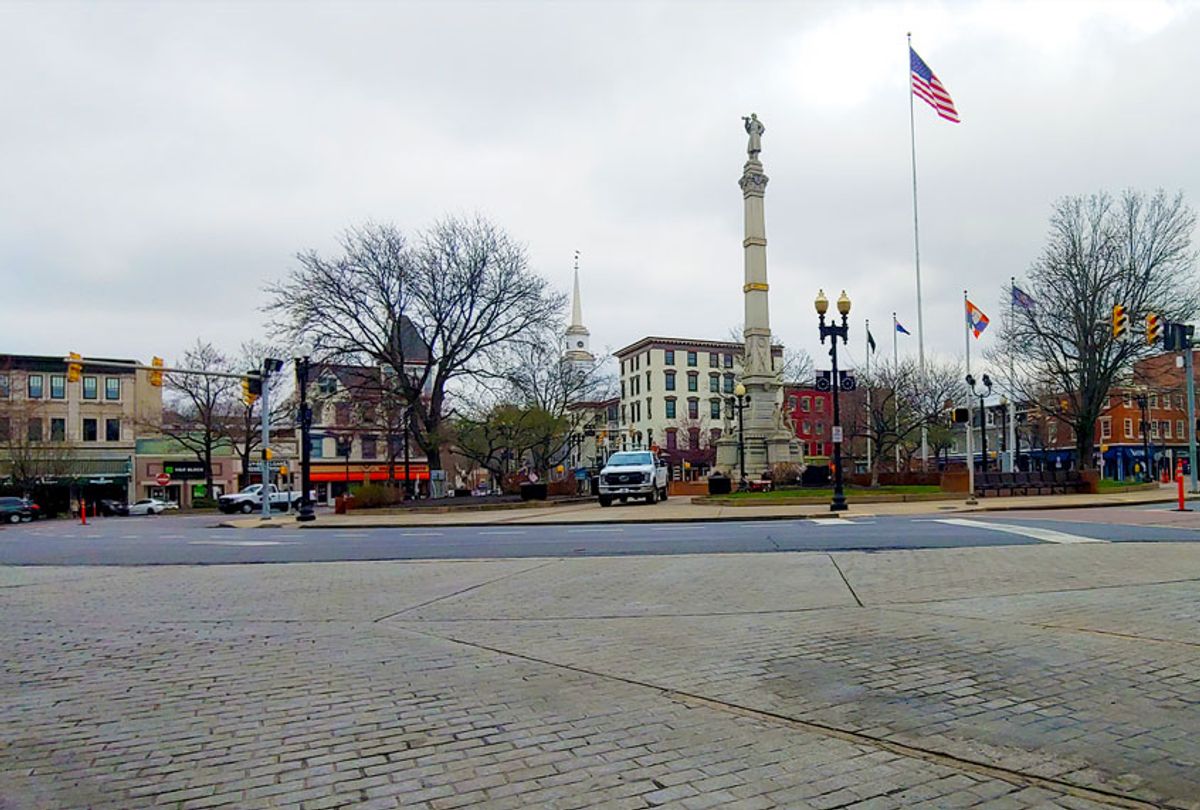 In downtown Easton, Pennsylvania, the public square adjoining the Crayola factory is a hugely popular tourist attraction. On March 17, 2020, the streets and sidewalks were completely empty after Pennsylvania Gov. Tom Wolf ordered a statewide shutdown over the ongoing coronavirus pandemic. (Nate Williams)
--

For 16 years, Cliff Hodges ran a small outdoor wilderness club in Santa Cruz, California, a beach town south of San Francisco. From surf lessons to wilderness survival training, Adventure Out proved to be a popular business venture that supported him and his family. But on March 16, when Santa Cruz County issued its stay-at-home order, Hodges ceased operations, laid off staff, and went without an income at all. Once Congress passed the CARES Act, which included a $349 billion emergency small business lending program known as the Paycheck Protection Program, he applied right away.

"I was pretty on top of it and got the paperwork ready in advance, I did my due diligence, got my tax forms and financial histories ready, and I applied the very first day applications were open on April 3 and submitted pre-applications with banks," Hodges told Salon in an interview. "I applied with four different banks because I read advice to be ready to apply to multiple banks, because you never know who will process it faster."

The PPP program was designed to provide small businesses with loans up to two and half times their monthly payroll. The loans are provided through private lenders. The law states that the loans can be converted into grants as long as 75 percent of the funds are used to retain employees. The money has to be used within eight weeks from the time the loan was distributed in order for it to be forgiven.

Despite his fastidiousness in applying to the PPP program, Hodges kept receiving emails asking for more paperwork from banks — adding more delays.

On Thursday, after weeks of push and tug with the banks, Hodges received an email telling him that the small business funds had been exhausted. Hence, unless Congress passes another stimulus package, Hodges won't be able to get a loan. He received this message from three of the four banks. The fourth, he said, sent him what seemed like a form letter and marked his case as "closing."

"They marked it as closing, but haven't contacted me so I don't know, I haven't been able to reach anyone, so maybe there is a small chance that I have money coming, but I don't know," he told Salon.

Hodges is one of numerous small business owners around the nation feeling hopeless, horrified that a program supposedly designed to help ran out of money in less than two weeks  (the program launched on April 3).

On Thursday, the U.S. Small Business Administration published a breakdown of Paycheck Protection Program loans approved. In it, they state that nearly 1.7 million loans were approved for, at an average of $206,000 each. About 4 percent of the approved loans were for more than $1 million. The construction industry was the top recipient of money from the program.

According to a national poll conducted between April 6-9 2020 by Chesapeake Beach Consulting for Small Business Majority, 33 percent of small businesses have closed their doors, with an additional 14 percent planning to do so. The survey, which surveyed 500 small businesses nationwide, found that of those businesses who laid off staff, 40 percent said those layoffs were permanent.

John Arensmeyer, CEO of Small Business Majority, a small business research and advocacy organization, told Salon he is not surprised that the funds were exhausted.

"It was never enough to begin with," Arensmeyer told Salon, adding that a lot of the money went to bigger small businesses, not the mom and pops shops that needed the help the most. According to the SBA, a small business is a company with up to 500 employees. For instance, the chain restaurant Shake Shack received a $10 million loan, according to Eater — even though Shake Shack is a sizeable fast food chain, and not what most of us think of when we think of "small" businesses.

"Another factor is that the money went out to the businesses who already have existing banking relationships," Arensmeyer said. "By running the program through the banking system you are by definition leaving out the people who don't have baking relationships, and that is the smaller underserved businesses."

Arensmeyer said he hopes that if another stimulus package passes that it will ensure grants are given through the IRS to smaller businesses, akin to how the $1,200 stimulus checks were sent via direct deposit.

"It was bad before and now they have no hope because they have nothing," Arensmeyer said.

In San Francisco, restaurant owner Jennifer Bennett is still unclear if her loan application has been approved. As a co-owner of Zazie, and the owner of Lovina, she has emptied her 401(k), cashed in her life insurance and sold her stock portfolio at the bottom of the market, in order to keep 58 families on payroll.

"We have to believe the government is going to come through with this," Bennett said, adding in the meantime she is willing to do whatever it takes to keep her businesses afloat. "There's no way they will let a very successful business of 27 years collapse because of this."

Bennett applied for a loan with four different banks as well, and never heard back from any of them, with the exception of one bank who responded to her on Friday morning right before Salon spoke with her. According to Bennett, the email said that her application had been accepted on Friday morning, but it didn't ask for more documentation.

"I'll believe it when the money arrives, I guess," Bennett said. "It looks like a form letter."

In Las Vegas, Nevada, Ron Nelsen, the owner and general manager of Pioneer Overhead Door, told Salon in an interview he received an email on Thursday night stating that his bank no longer had funds.

" I feel like a political football in between two parties, and I'm disappointed in my government once again," Nelsen said.