This close-up documentary is a daughter's look back at her parents' iconic LA store, an LGBTQ media cornerstone 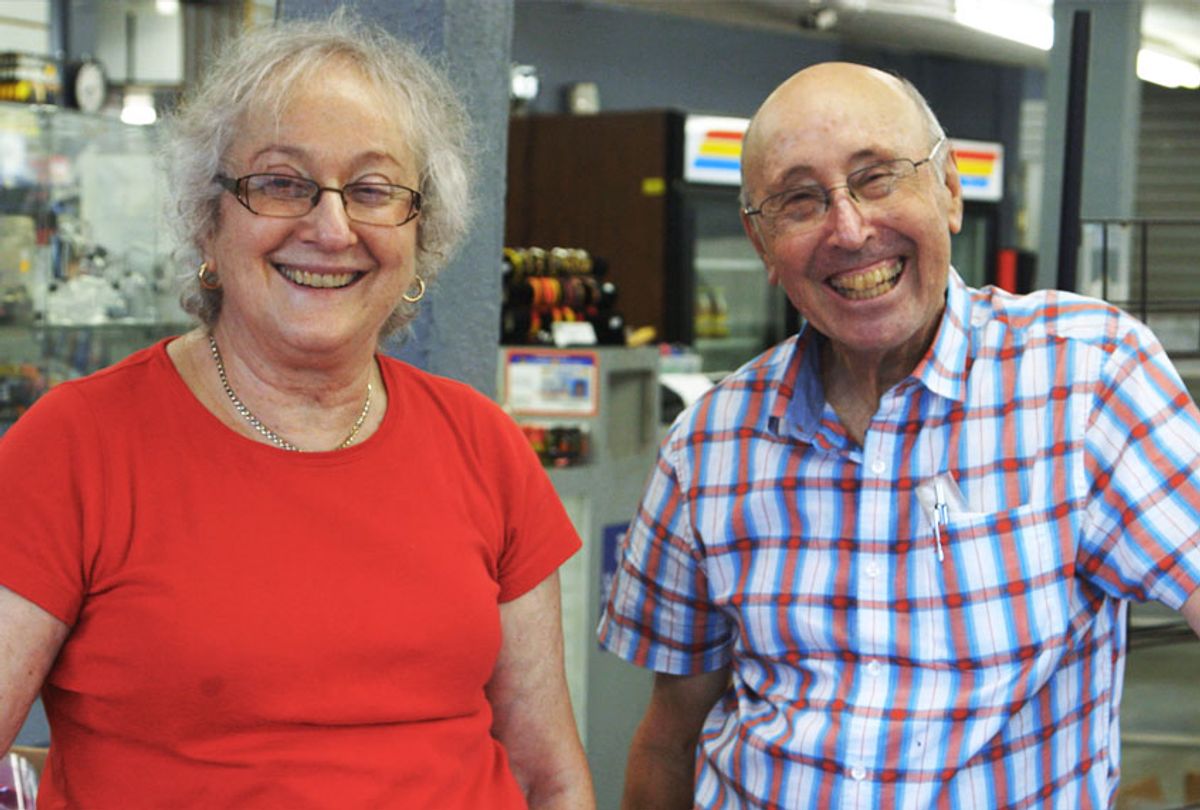 Karen and Barry Mason in "Circus of Books" (Netflix)
--

The default line in the Mason family was that their family ran a bookstore. This statement was technically accurate, but the full truth, according to artist and filmmaker Rachel Mason, was shrouded in a Mafia-like secrecy; you didn't talk about the bookstore outside the family and, if she and her brothers would occasionally visit the store, they had to abide by strict instructions: "Don't look around, look at the floor."

It's clear from the beginning of the film, currently streaming on Netflix, that Karen and Barry Mason didn't intend on owning a sex shop. Karen was a journalist, Barry worked in film and had several patented medical inventions on the side. When she got pregnant and he had some hiccups at work, they needed to make a career shift because, as Karen puts it, "you don't have the luxury of not earning a living."

Additionally, as another customer pointed out, "there was always cruising going on the bookstacks." In a pre-Grindr era, Circus of Books was one safe space for gay customers to find each other and pursue casual sex or relationships. It was also a space in which those customers could meet and engage with some of the most well-known adult performers of the time, like Jeff Stryker, who would visit the shop to help sell and sign his VHS tapes.

"We never saw any of those movies," Karen says to the camera, which brings up one of the most intriguing points of the movie. In watching "Circus of Books," you get the overwhelming sense that the community took more intense pride in the bookstore than the Masons, especially Karen, did.

Karen forbade her husband from speaking in public about what they did, and she kept it from the leaders and members of the local synagogue she attended. As someone who was raised in a deeply conservative household, I get it — sexuality, and all the bells and whistles associated with it, maybe isn't a topic of conversation you want to have with your rabbi, your priest or the members of the PTA.

Viewers do get affectionate peeks into Karen and Barry's relationships with their customers and the local gay community; they speak about losing customers and employees to AIDS, and the pain of knowing that those individuals' own parents wouldn't visit them in hospice. But there are layers to how Karen's conservatism and Barry's subsequent silence intersected with owning a cornerstone of gay media that the film doesn't fully explore.

Perhaps it's because Rachel Mason was, for a large part of her life, shielded from what her parents did professionally — it wasn't until she was in late high school that she found out what Circus of Books actually sold. And while presumably Karen and Barry were a conservative straight couple, that is never actively questioned in the documentary, a choice that's both understandable given the filmmaker's relationship to them and also a bit of a let down for the viewer.

When Rachel Mason turns the camera on her brother Joshua, who details how Karen struggled intensely when he came out as gay (her initial response was that "God must be punishing me" and that "it existed outside [her] core values"), we're left to consider what role homophobia played in her personal and business life. It momentarily raises the question of whether Circus of Books, despite being viewed at its peak as beacon for members of the gay community, could have also been a capitalistic venture overseen by owners whose own values were prejudiced against the customers they served.

"Everything about the business was really in support of the family, ironically," Josh said at one point. "The 'gay' part of it fell on the 'business' side of that mental dividing line."

Eventually, Karen does become a vocal member and facilitator of PFLAG — Barry had been supportive from the start — and ultimately questions her theological views on homosexuality. This turn is explored with such a light hand, however. What a documentary like this would have looked like in the hands of someone who wasn't so close — and simultaneously so distant — from its main subjects will remain an open question.

At the end of the film, though, the two narratives in "Circus of Books" do dovetail really nicely. We see Karen taking a box of materials from the store — DVDs, tapes and magazines — to the ONE Archives Foundation in Los Angeles. The archive is dedicated to telling the accurate and authentic stories of LGBTQ people, and viewers watch as Karen takes a brief tour of facilities.

One of the attendants lights up when she mentions Circus of Books: "It was a place you could go and find other people like yourself."

These are the moments in which "Circus of Books" is at its best — when we as viewers, through interviews or golden-hued archival footage, are transported back and experience a kind of collective nostalgia for a place that, in its time, made life better for the people it served. Both Circus of Books locations have since closed, but this documentary is a necessary, if incomplete, homage to their influence.

"Circus of Books" is now streaming on Netflix.