"They're going to be allowed to come, because they allow people like you to be able to work" 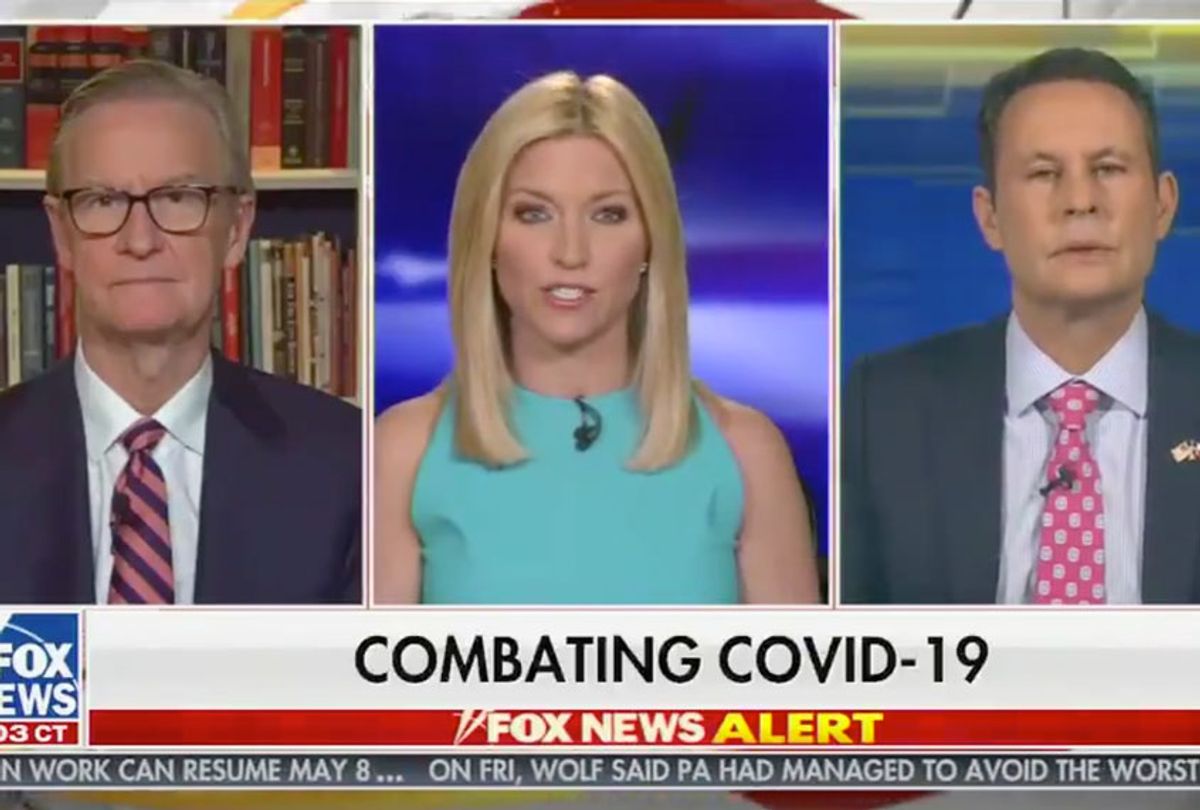 The co-hosts of "Fox & Friends" addressed the topic of Ainsley Earhardt's au pair for the second day in a row Wednesday, leaning on the personal anecdote as a device to illustrate the real-world implications of Trump's immigration ban.

While trying to tease out the details of Trump's 60-day ban on green cards, co-host Brian Kilmeade recalled Earhardt's personal testimony about the value of foreign workers from the previous morning.

"You mentioned yesterday the au pair, Ainsley, for middle-class families," he said. "They're going to be allowed to come, because they allow people like you to be able to work and do a job that gets you up at three in the morning."

Earhardt first raised the issue Tuesday as the co-hosts tried to make sense of the president's seemingly unprompted and detail-free tweet vowing to temporarily ban all immigration as the country navigates the coronavirus pandemic.

"Many families here, including mine — we have au pairs, and we rely on them," Earhardt said. "I go to work at three o'clock in the morning, so I need her there. And I need her in my house so that she can help me with my daughter."

"Many families rely on child care from other countries," she continued. "These au pairs come here on work visas. They have to go back to their country to get the visas renewed, and we've been talking in my house about how that's going to happen."

Trump, ultimately, did not deliver at the promised scope. He signed a limited order that temporarily suspends immigration for multiple categories of immigrants who are not currently in the U.S. and do not already hold a valid visa. Specifically, the order impacts seeking green cards for work, as well as families of green-card holders and U.S. citizens living outside the country. It does not apply to those seeking temporary visas, including guest workers or students.

Trump cast his order as a move to protect Americans works during Tuesday's White House briefing.

Though twenty-two million Americans have filed for unemployment amid economic fallout from the coronavirus pandemic, Trump's order seems to contradict his affirmations. It does not, for instance, stop the influx of hundreds of thousands of foreigners on temporary work visas, including for the agriculture sector, which comprises one of the largest subsections of immigrant labor.

It remains unclear how the coronavirus pandemic will impact immigration. The U.S. currently has the highest recorded death toll in the world, projected to hit 50,000 by the weekend. (Trump has stressed that the pandemic will claim between 50,000 and 60,000 Americans.)

Vishal Iyer, an immigration rights attorney in Houston, told Salon that Trump "has taken a broken system and broken it further."

"Perhaps predictably, the order does not affect noncitizens within the United States from adjusting status to a green card holder," Iyer said. "But it is devastating for parents of U.S. citizens; for spouses and children of green card holders; all other family immigrants; and many employment-based immigrants."

However, the same policy revisions that pleased the "Fox &Friends" cast also upset Tucker Carlson, who claims that the new order does not go far enough. Carlson dismissed white supremacy as a "hoax" and "not a real problem" after the El Paso massacre.

"These visas do not improve American society in any way. We have no moral obligation to give them. There is no mention of guest workers on the Statue of Liberty," Carlson said. "There's only one point in handing out hundreds of thousands of these visas to foreign nationals — and it's to placate big business."

"He's showing he's not tone deaf to — there are certain industries that need those legal work visas to come here," he said. "So that's important."

The Wall Street Journal reported in 2017 that the Trump administration, in the middle of its "Buy American, Hire American" campaign, had considered eliminating foreign work exchange programs, including for au pairs.