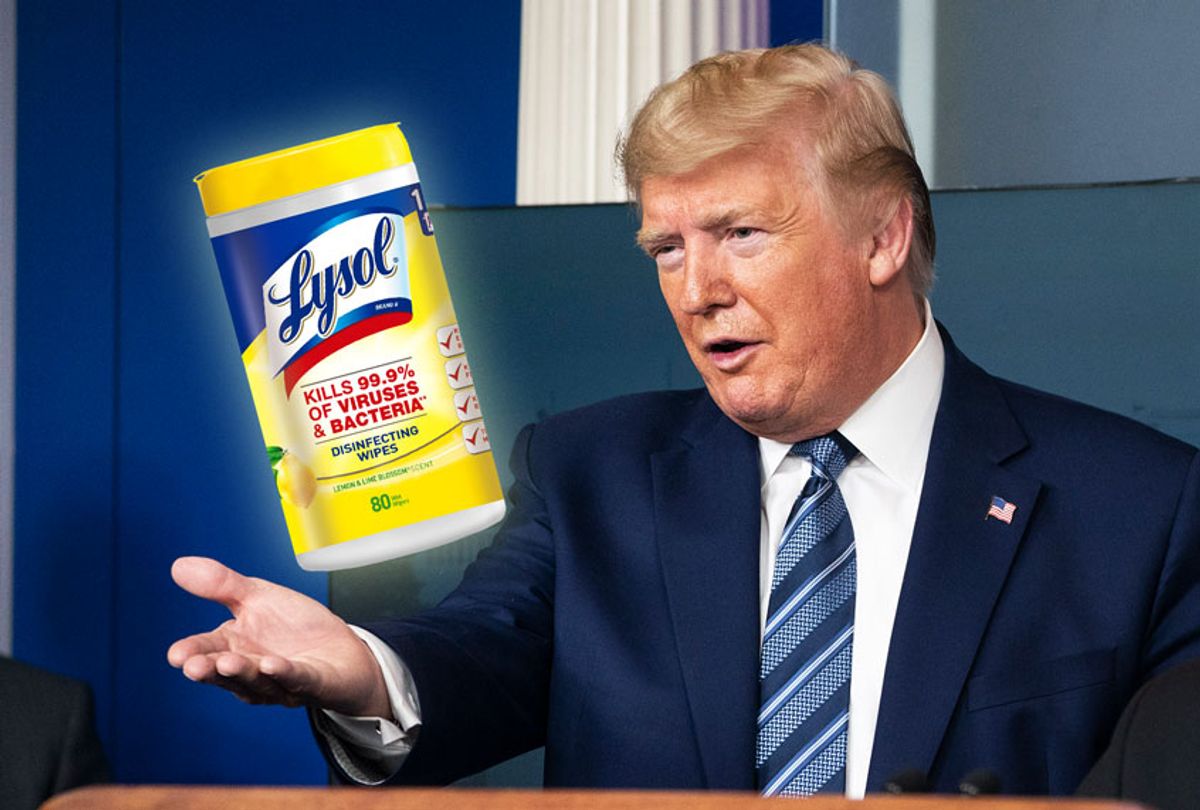 "We must be clear that under no circumstance should our disinfectant products be administered into the human body (through injection, ingestion or any other route)," the Reckitt Benckiser Group, who manufactures Lysol, warned in a statement following the president's news briefing.

Even the president's own administration warned against ingesting cleaning solutions after his statement.

Dr. Stephen Hahn, the head of the Food and Drug Administration and a member of the White House coronavirus task force, told CNN that he "certainly wouldn't recommend the internal ingestion of a disinfectant."

"Never apply the product to yourself or others," the Environmental Protection Agency said Thursday in a statement. "Do not ingest disinfectant products."

Trump's comments came after Bill Bryan, the head of the Department of Homeland Security's science and technology division, gave a presentation showing that the coronavirus "dies quickest in sunlight." He also recommended using disinfectant or isopropyl alcohol to kill the virus quickly on surfaces.

"So supposing we hit the body with a tremendous — whether it's ultraviolet or just a very powerful light — and I think you said that hasn't been checked because of the testing," he said. "And then I said, 'Supposing you brought the light inside the body, which you can do either through the skin or some other way.' And I think you said you're going to test that, too."

Trump then bizarrely suggested that doctors could inject disinfectant into individuals to clean their lungs.

"I see the disinfectant that knocks it out in a minute — one minute. And is there a way we can do something like that by injection inside or almost a cleaning?" he asked Bryan. "As you see, it gets in the lungs. It does a tremendous number on the lungs, so it would be interesting to check that."

Trump appeared to stun Dr. Deborah Birx, the coordinator of the White House coronavirus task force, when he asked her whether she heard about the effect of sunlight on the coronavirus.

"Not as a treatment. I mean, certainly fever is a good thing when you have a fever. It helps your body respond. But not as — I have not seen heat or . . ." Birx replied before Trump cut her off.

Medical professionals were horrified that the president suggested that people inject themselves with dangerous cleaning chemicals.

"My concern is that people will die. People will think this is a good idea," Craig Spencer, the director of global health in emergency medicine at New York-Presbyterian/Columbia University Medical Center, told The Washington Post. "This is not willy-nilly, off-the-cuff, maybe-this-will-work advice. This is dangerous."

"Injecting disinfectant into your body will kill you," California physician Dr. Eugene Gu warned. "While it feels completely unnecessary to even say this, people drank fish tank cleaner containing chloroquine because of what they heard from rumors about the substance. We must fight deadly misinformation no matter how stupid."

Earlier this year, an Arizona man died and his wife was hospitalized after they ingested a fish tank cleaner containing chloroquine, a form of an anti-malarial drug touted by Trump. The president has largely backed off his hype of the drug as a potential coronavirus treatment after numerous studies found it had no benefit in treating the virus.

"We've heard the president trying to practice medicine for several weeks now, but this is a new low that is outside the realms of common sense or plausibility," Ryan Marino, a medical toxicologist and emergency physician at University Hospitals in Cleveland, told The Post. "I can understand looking to medicines that might have some effect or some sort of studies in a petri dish showing that they might work on a virus. But talking about putting ultraviolet radiation inside of the human body or putting antiseptic things that are toxic to life inside of living people? It doesn't make any sense anymore."

"This notion of injecting or ingesting any type of cleansing product into the body is irresponsible, and it's dangerous," Dr. Vin Gupta, an intensive care unit physician and professor at the University of Washington's Institute for Health Metrics and Evaluation, told NBC News. "It's a common method that people utilize when they want to kill themselves."

"It's exceptionally dangerous," he added. "There's people who hang on to every word of the president."