Farmers pleaded for the Trump administration to help for nearly a month. Now, they'll have to wait even longer 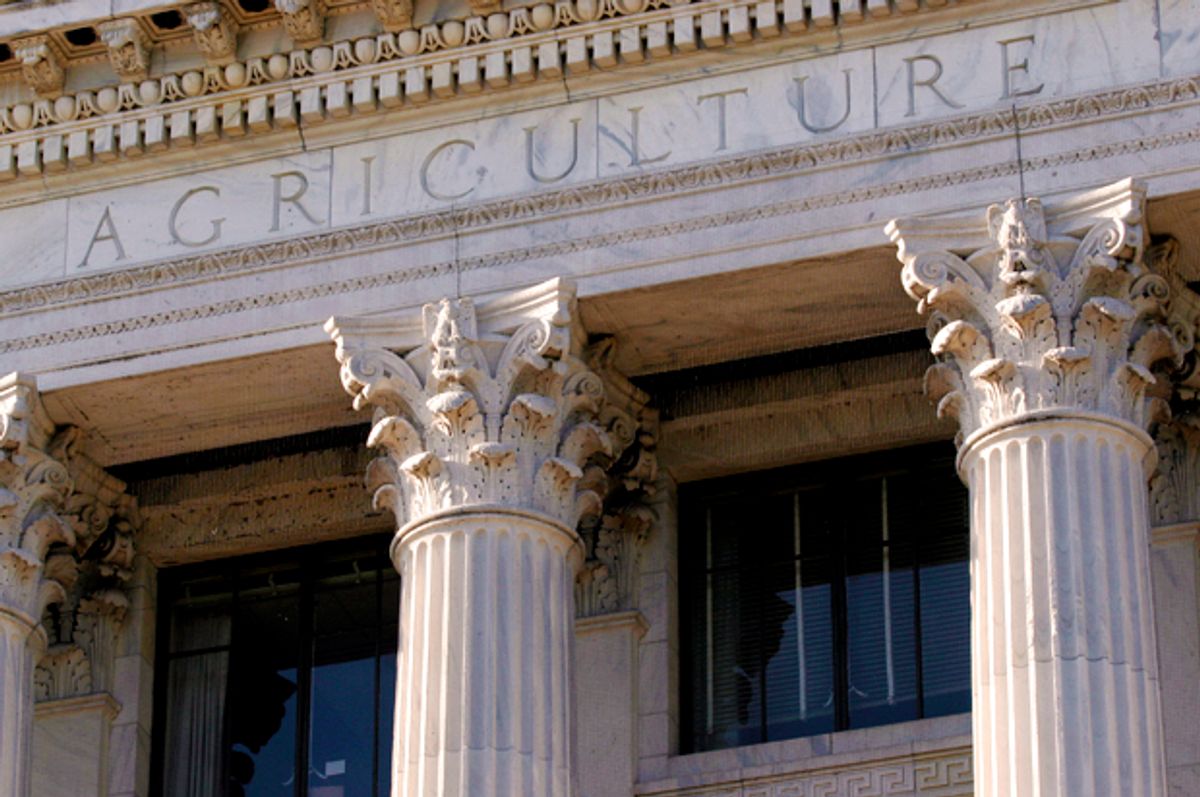 The US Department of Agriculture building (Getty/Saul Loeb)
--

The Department of Agriculture let millions of pounds of food rot in fields across the country as food banks struggled to keep up with a massive increase in demand.

State officials and lawmakers pleaded for the USDA to buy up mass quantities of food from farmers after schools and restaurants around the nation shut down due to the coronavirus, but the department did not respond with a plan to buy up surplus products from farmers until last week.

"We've been devastated," farm owner Paul Allen, who said he left about 8 million pounds of cabbage and 4.5 million pounds of green beans in the field, told Politico. "But if I stop growing food for our country, that's a bigger problem yet."

Florida officials estimated that up to 250 million pounds of tomatoes could be left to rot in the field, costing farmers hundreds of millions of dollars. The industry is projected to lose more than $1 billion each month in California.

As a result of the delay, farmers were seen dumping milk and leaving crops to rot in the fields. The delay came as food banks were overwhelmed after millions lost their jobs amid the pandemic.

"It's not a lack of food — it's that the food is in one place, and the demand is somewhere else and they haven't been able to connect the dots," former Agriculture Secretary Tom Vilsack told the outlet. "You've got to galvanize people."

Demand for aid rose by an average of 70% since the crisis began, and 40% of individuals are new to the system, according to Feeding America, a national coalition of food banks.

Several farming groups urged Perdue to make use of the excess food by providing it to food banks last month.

"There is no reason these high-quality, nutritious, farmer-grown products should be left in facilities to rot when there are so many American families who are suddenly faced with food insecurity," the groups said in a letter. "These growers and companies are already donating to food banks and others in need and will continue . . . but they are also facing their own economic crises."

Perdue has not responded to the letter, but the USDA announced last week that it would buy billions in excess food to ship to food banks. Perdue said in a statement that the department was working as fast as it can on the issue.

"USDA is committed to maximizing our services and flexibilities to ensure children and others who need food can get it during this coronavirus epidemic," he said. "This is a challenging time for many Americans, but it is reassuring to see President Trump and our fellow Americans stepping up to the challenges facing us to make sure kids and those facing hunger are fed."

But federal officials predicted it could take weeks before the food is packed and shipped to food banks, according to Politico.

"By the time that comes through, it won't help Florida," Brittany Lee, the head of the Florida Blueberry Growers Association, told the outlet.

Allen added that farmers have also been angered by the USDA's plan to impose payment limits for the aid. The USDA said earlier this month that it would pay no more than $125,000 per commodity, or $250,000 in total.

"We begged them not to put a cap on it," Allen said, adding that different crops have very different costs. The $250,000 would make up for just a single day's harvest at his farm.

Industry groups argued that the USDA was not reactive enough to the plight of farmers.

"We are super frustrated that they're not being aggressive enough," Dennis Nuxoll, a lobbyist for Western Growers, told Politico. "It's a sound idea, but it doesn't match the magnitude of need."

"This thing is a joke," farm owner Tony DiMare agreed, explaining that he has gotten numerous calls from food banks but does not have the money to cover the cost of harvesting, packing and shipping the food.

Some farm owners have simply started giving food away to anyone willing to drive to pick it up.

"At first, I thought we'd have maybe 20 people. About 60,000 people could have about a 10-pound bag a piece . . . We saw people from as far away as Las Vegas, which is an eight-hour drive from here," Idaho potato farmer Ryan Cranney said. "If we as a country have more understanding of our food chain and where our food comes from — and really what that means to farmers and the distribution system — maybe we'll be able to change things where we're not quite as vulnerable going forward."