Back to the future: Governors outflank Trump with a new Articles of Confederation

Governors are doing their best to escape our performance-art president. But there's a reason we have a constitution 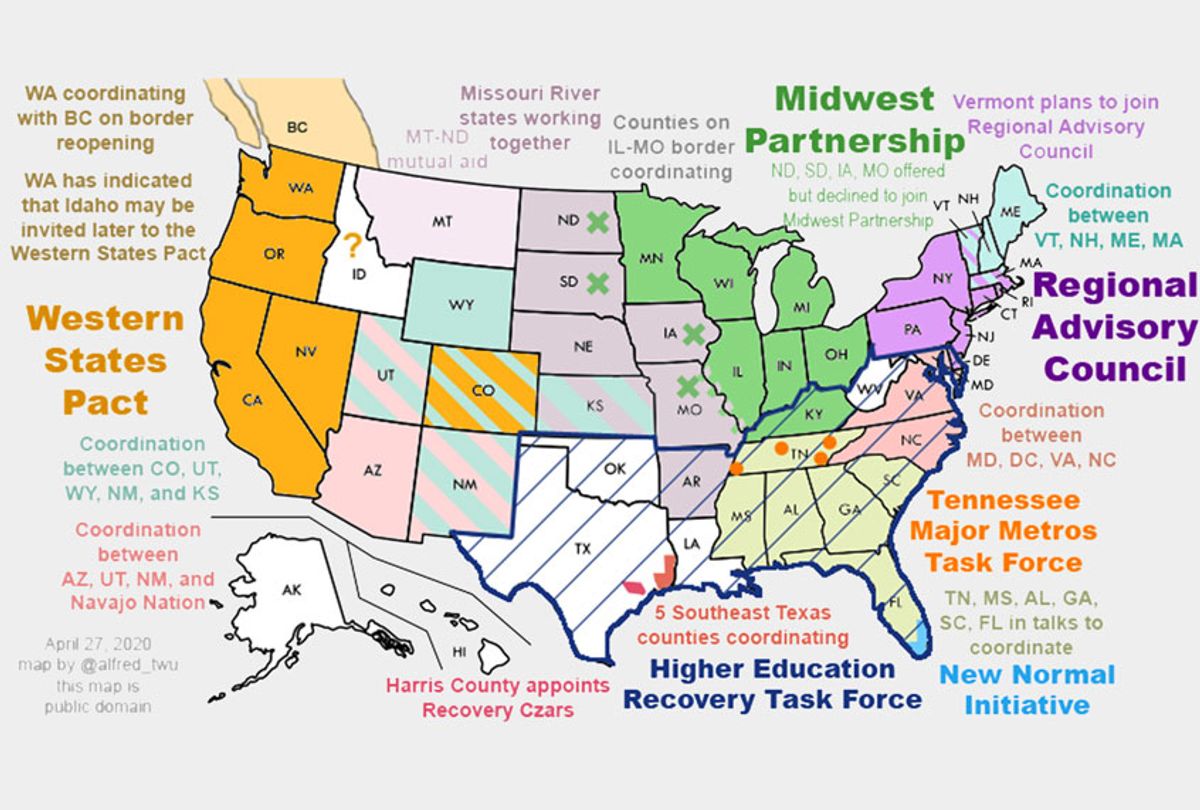 Back in the middle of March, Ron Klain, the man President Obama charged with handling the Ebola crisis in 2014, appeared on MSNBC's "All In With Chris Hayes" to discuss the plight of governors around the country who were begging the federal government for help dealing with the coronavirus and hitting roadblocks at every turn. Klain made this observation:

I listen to you talk to Gov. Murphy [of New Jersey], and I feel like we're in 1786 under the Articles of Confederation here. I mean, you know, the governors are getting together to solve problems. I got great respect for Gov. Murphy, Gov. Cuomo, Gov. Lamont, Gov. Wolf. It's great they're doing that.

Recall that the Articles of Confederation, which governed the newborn United States from 1781 to 1789 — when the Constitution was ratified — called for no president, no federal judiciary and essentially no federal government. The states operated as sovereign entities, with the Congress as the only national body. The founders decided they needed to reform the system after realizing they needed a stronger central government to protect the fragile new country they'd created.

Over the years Congress has abdicated much of its own power to the president in times of war, leading to the situation where the president has the ability to wage war almost singlehandedly. That was certainly not the intention and that power has been abused terribly. But the idea that a federal government is necessary to protect the entire country, whether it be an invasion or, say, a pandemic, is intrinsic to the U.S. Constitution.

Donald Trump has been blustering about his "power" since he was elected, even fatuously declaring, "I have an Article II, where I have to the right to do whatever I want as president." More recently, he argued that he had "total authority" to make states withdraw their stay-at-home orders, before backing off.

But from the moment the coronavirus hit our shores, Trump has actually been impotent in every important way. Sure, he has called himself a "wartime president" and has been on TV almost every day blathering about what a great job he's doing. But in fact he has abdicated the primary job of being president, which is to lead the country during a time of crisis.

Trump has said bluntly that the federal government is not a "shipping clerk" and is only there to back up the individual states. He didn't deploy the Army Corps of Engineers or the VA, and had to be arm-twisted into sending the two Navy hospital ships to provide medical backup to America's two largest cities, New York and Los Angeles.

Trump had a massively powerful tool at his disposal called the Defense Production Act, which the New York Times pointed out he had already used "hundreds of thousands of times" as president:

Chemicals used to construct military missiles. Materials needed to build drones. Body armor for agents patrolling the southwest border. Equipment for natural disaster response. A Korean War-era law called the Defense Production Act has been used to place hundreds of thousands of orders by President Trump and his administration to ensure the procurement of vital equipment, according to reports submitted to Congress and interviews with former government officials.

Yet as governors and members of Congress plead with the president to use the law to force the production of ventilators and other medical equipment to combat the coronavirus pandemic, he has for weeks treated it like a "break the glass" last resort, to be invoked only when all else fails.

"You know, we're a country not based on nationalizing our business," Mr. Trump said earlier this month. "Call a person over in Venezuela, ask them how did nationalization of their businesses work out? Not too well."

Instead of using the act to procure desperately needed medical equipment, Trump told state governors last month, "Respirators, ventilators, all of the equipment — try getting it yourselves." This led to bidding wars and cloak-and-dagger black market purchases. He complained mightily that they weren't doing their jobs. But it was he who wasn't doing his.

As far as the coronavirus pandemic is concerned, the United States doesn't have a president. There's just a man who comes on TV and does a bit of performance art, kind of like that installation of Ivanka Trump vacuuming. But he doesn't actually do anything.

So the states have had to stop operating under the Constitution and, as Klain says, have instead reverted back to the Articles of Confederation. Here's what your new map looks like:

Because of the lack of national leadership, governors are forming regional compacts in order to try to facilitate a response that makes sense. Despite all the endless rhetoric about how you can't have a one-size-fits-all process, the fact is, as the cliché goes, the virus doesn't respect borders. If one state decides to throw caution to the wind and open everything up without regard to casualties, while its next-door neighbor tries to keep everything locked down to prevent more deaths, it will be almost impossible to prevent the spread from getting out of hand.

As New Mexico Gov. Michelle Lujan Grisham told the New York Times, "If one state doesn't get the resources and materials they need, the entire nation continues to be at risk."

Since we really don't have any kind of national plan or guidance beyond telling people to wash their hands and stay six feet away from each other, states and localities are working together regionally to try to create plans for reopening that won't result in massive infections spreading from one to another.

It seems to be the best they can do under the circumstances. Unfortunately, even their best efforts are probably going to fail unless we get a massive dose of good luck. Just because Trump has decided it's the 1780s again doesn't mean that it actually is. And as much as we are politically divided, this isn't strictly a matter of red states vs. blue states, as the rising caseload in more rural, conservative areas should make clear.

We are one country, intertwined in so many ways we couldn't separate if we wanted to. People and goods travel unimpeded between the states, and so does the virus.

If we had a national testing process and a systematic plan for gradual reopening, perhaps this could be mitigated in a comprehensive way. But this is all going to be done ad hoc, with the various actors just hoping that the hospitals and mortuaries don't get overrun again, and that the supply chain that's keeping us fed and functioning doesn't break down due to a sickened workforce.

This is why the Constitution replaced those Articles of Confederation in the first place — so the central government, led by a president, could enact policies that would protect the whole country. Sadly, we have a president who doesn't know how to do that, and isn't interested in learning.

All he has, even after all we've been through, is magical thinking: