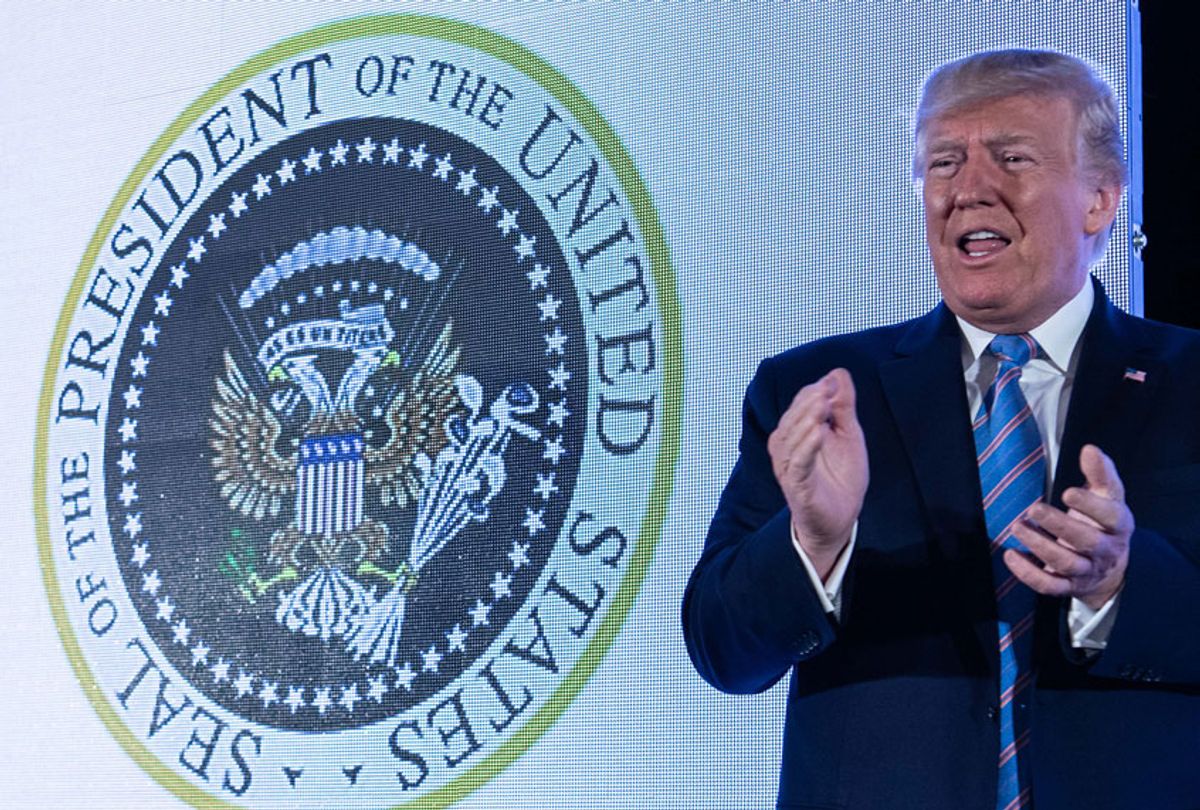 President Trump gave a speech this week at the conservative Turning Point USA student summit ,unaware that he was standing in front of an altered presidential seal that featured a Russian symbol, an eagle holding golf clubs, and the words “45 is a puppet” in Spanish.

A spokesperson for Turning Point USA told CNN that the altered seal featured at their event was a mistake that happened after the White House instructed the group to replace its own branding with a presidential seal for Trump’s speech on Tuesday.

"We're sorry for the mix-up and meant no disrespect to the White House or the President or the advance team," a source at Turning Point USA told the network, explaining that "one of our video team members did a Google Image search for a high-res png (file) presidential seal” but "with the pressure of the event, didn't notice that it is a doctored seal."

“We did let the individual go,” a spokesman for the group told the Washington Post. "I don’t think it was malicious intent, but nevertheless.”

The doctored presidential seal shows an eagle with two heads instead of one, which the Post notes “closely resembles the bird on the Russian coat of arms” and the state seal of the Russian Federation.

The eagle is seen clasping a set of golf clubs instead of arrows, in an apparent jab at Trump’s golf habit. Instead of “E pluribus unum,” the official United States motto, the doctored seal  had an inscription reading “45 es un títere,” which means “45 is a puppet” in Spanish.

“It was a last-minute A/V mistake — and I can’t figure out where the breakdown was — but it was a last minute throw-up, and that’s all it was,” a Turning Point USA spokesman told the Post. “I don’t know where they got the image from.”

A White House official blamed Turning Point USA for not catching the error.

"We never saw the seal in question before it appeared in the video. For anything further, you would need to contact Turning Point — it was their event," the official told CNN.

Richard Painter, the former White House ethics chief under President George W. Bush, told the Post that it falls on the White House to ensure that the president does not appear in front of any unauthorized graphics, calling the incident “careless.”

“You should have control over what the private group is doing, what they’re putting on the screen and anything else,” he said. “To let someone project something on the screen that isn’t controlled by the White House is pretty stupid.”

Trump spoke to about 1,500 students and activists at the summit, where he railed against “fake news,” though most of the fake news at the event came from him.

Trump falsely accused “The Squad” of talking “evil Jews” and falsely alleged that Rep. Alexandria Ocasio-Cortez, D-N.Y., “calls the people of our country and our country ‘garbage.’”

He went on to repeat his entirely baseless claim that the only reason he did not win the popular vote in 2016 was because millions of undocumented immigrants illegally voted multiple times in the election.

Trump also gave the teens in attendance a highly inaccurate lesson in the U.S. Constitution, asserting that it gives him unlimited powers, which it most certainly does not.

"I have an Article 2,” Trump declared, “where I have the right to do whatever I want as president.” He was likely referring to Attorney General Bill Barr's controversial opinion that the president is "the sole repository of all Executive powers conferred by the Constitution," which is not widely shared by legal scholars.