Trump wants to reopen schools before summer: A worse idea than bleach? 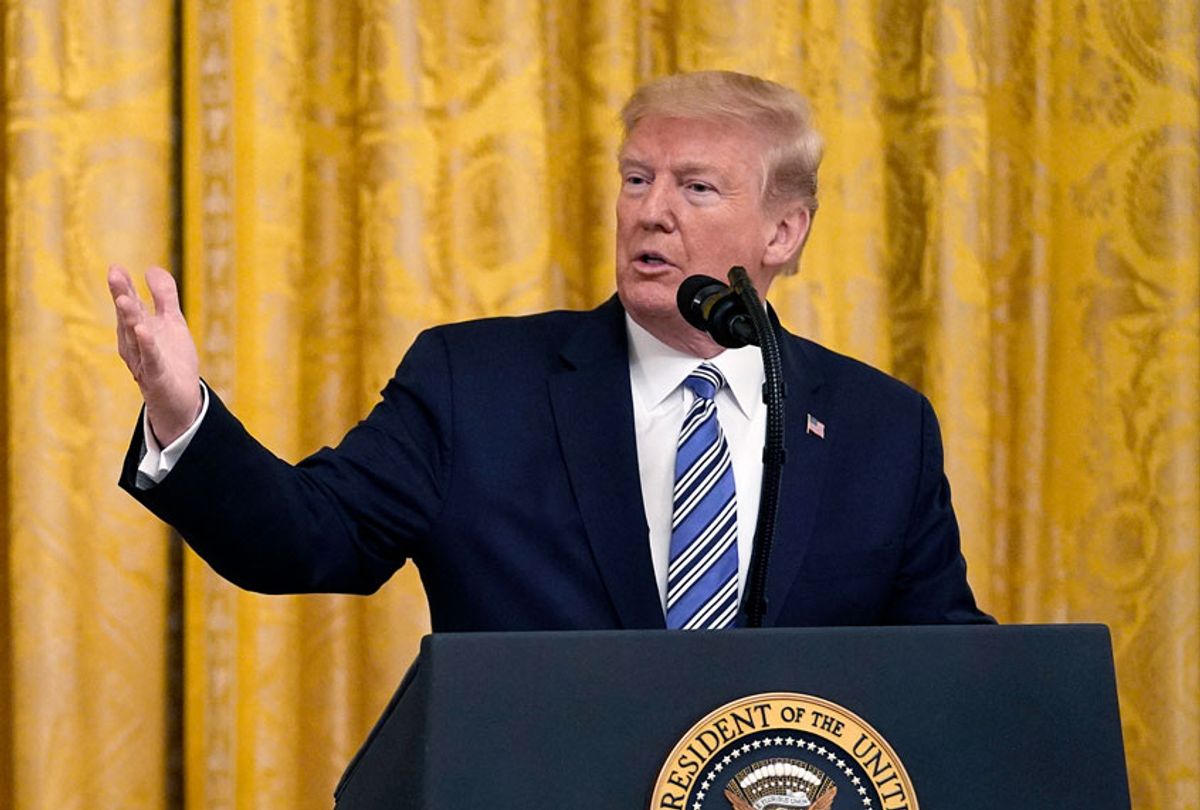 Donald Trump's suggestion that some states rush to reopen schools before summer is not as obviously stupid as his idea about injecting bleach into the human body to fight the coronavirus — almost nothing could be — but it could well end up being more dangerous, if any governors listen to him.

The consistent theme here is that Trump is always looking for an easy way out of this crisis — a quick fix, a miraculous decline, something to swallow or inject that will make it all go away — and there isn't one.

The only solution involves a lot of inspired leadership, a lot of hard work, and a massive World War II-level supply-chain initiative.

Now Trump has evidently seized on the fact that children seem relatively impervious to COVID-19. So why not, he asks, send them back to school?

Well, there's a reason that scientists sometimes refer to children as "little vectors."

As any parent knows, a school is a petri dish for respiratory illness. Kids spread germs to each other — and then bring them home. As far as the coronavirus is concerned, even if the kids don't get particularly ill, their parents, their grandparents and —  most directly — teachers and staff are put at risk. And so are the people who make contact with the people the kids have infected.

That's why shutting schools down was so important to slowing the spread of the virus. And that's why public health experts generally seem to think that schools should only reopen when the community as a whole has the spread more or less under control.

As crucial as it is to families and to the economy, reopening school is premature as long as there's no way to make sure that parents aren't sending their children into the middle of an outbreak, one that will then blow back into their homes and communities.

At a news conference on Monday that was typically full of hyperbole, self-praise and misinformation, Trump said that having schools "open up" even briefly "would be a good thing."

Earlier on Monday, he had told governors on a phone call that "Some of you might start thinking about school openings, because a lot of people are wanting to have the school openings."

He wildly minimized the significance of such a move. "It's not a big subject," he told the governors. "Young children have done very well in this disaster that we've all gone through."

When should schools reopen?

The media needs to put this issue in context by talking to experts and reading the literature.

A recent report from a blue-ribbon panel convened by the Edmond J. Safra Center for Ethics at Harvard establishes four phases in reopening society. It recommends holding off on reopening schools until Phase 4 — and we're not even in Phase 1 yet.

"We estimate that the economy has the capacity to reach Phase 4 by early August if fully mobilized in this direction," the report says, meaning after months of massively scaled-up testing, contact tracing, isolation and quarantine, the likes of which the federal government has not seriously contemplated.

The draft guidelines for reopening from the Centers for Disease Control and Prevention, which are floating around Washington, include recommendations for schools, such as putting students' desks six feet apart, staggering arrival and departure times and closing playgrounds.

But the CDC warns those recommendations are only for communities "with confidence that the incidence of infection is genuinely low."

A 2010 study of the 2009 H1N1 influenza pandemic found that overly brief school closures appeared to make the outbreak worse, and emphasized "the importance of keeping schools closed until the epidemic curve is far past its peak." Premature reopening while still in the middle of the epidemic allowed "a whole population of susceptible students to mix and be infected and extend the length of the epidemic."

The 43 states that have ordered or recommended that schools remain closed this spring are having a hard enough time figuring out how to reopen in the fall.

Amid the planning, there's plenty of skepticism. Teachers, their unions and some administrators fear political pressure will force a return before it is safe. Some dismiss the social distancing ideas under consideration as a joke, saying it would be nearly impossible to prevent virus transmission in a school….

It won't be safe to reopen until there is "massive and accurate" testing, as well as contact tracing and isolation for those who are infected, said Lily Eskelsen García, president of the National Education Association, the country's largest union. She is frustrated by what she sees as inappropriate pressure from Trump and worries it will lead to bad decisions. "We need evidence it's safe for those kids to go back."

A petition from a New York teachers' union demands "protocols and procedures in place to ensure the safety and health of the staff and students," starting with "Widespread access to coronavirus testing to regularly check that people are negative or have immunity."

Colleges and universities are wrestling with similar issues. Christina Paxson, the president of Brown University, wrote in a New York Times opinion column on Sunday:

The reopening of college and university campuses in the fall should be a national priority. Institutions should develop public health plans now that build on three basic elements of controlling the spread of infection: test, trace and separate.

Testing is an absolute prerequisite. All campuses must be able to conduct rapid testing for the coronavirus for all students, when they first arrive on campus and at regular intervals throughout the year. Testing only those with symptoms will not be sufficient. We now know that many people who have the disease are asymptomatic. Regular testing is the only way to prevent the disease from spreading silently through dormitories and classrooms.

From Paxson's view in Rhode Island, which has tested more residents per capita than any other state, that may actually seem possible. But there's no way, under anything like the current federal trajectory, that campuses across the nation will be prepared to do that. It would take a dramatic shift, starting at the White House.

No such shift is in evidence

Trump on Monday presented what he called a "blueprint" for increasing testing capacity, but it was just another exercise in blame-shifting and avoiding responsibility.

In a reflection of Trump's ever-diminishing credibility, the political media called him out on it.

Mr. Trump's announcement in the Rose Garden came after weeks of him insisting, inaccurately, that the nation's testing capability "is fully sufficient to begin opening up the country," as he said on April 18. Numerous public health experts say that is untrue, and Mr. Trump's plan may do little to fix it.…

Rather than one coordinated federal response, the Trump administration has been engaging on an ad hoc basis as states take the lead.

Vox's German Lopez wrote that it "read a lot like an abdication."

Mike DeBonis, Chris Mooney and Juliet Eilperin wrote in the Washington Post that the blueprint "leaves the onus on states to develop their own plans and rapid-response programs" even as "health and economic experts said the current patchwork of testing efforts is insufficient to allow the economy to reopen safely."

Weijia Jiang reported on the CBS Evening News that "this new plan does not provide specifics about the supply chain or a roadmap for growing testing capacity, and the burden remains largely on the states."

Kristen Welker reported on NBC Nightly News, "The president mostly laid out steps that his administration has already taken to do testing."

The Post reporters also noted that, in a letter to Congress, "a bipartisan cadre of public health officials led by former Trump Food and Drug Administration commissioner Scott Gottlieb and Andy Slavitt, a onetime senior health official to President Barack Obama, warned that 'current testing capacity and accuracy must be improved'."

California Gov. Gavin Newsom on Tuesday raised the possibility of opening schools there — not before summer, but before fall. "I think we might want to consider getting that school year moved up a little bit," he said, suggesting a return to school as early as late July.

But like so much else right now, the opening of schools seems to depend most of all on the availability of testing, either at the community or school level, on a scale that seems impossible as long as the Trump administration fails to act.