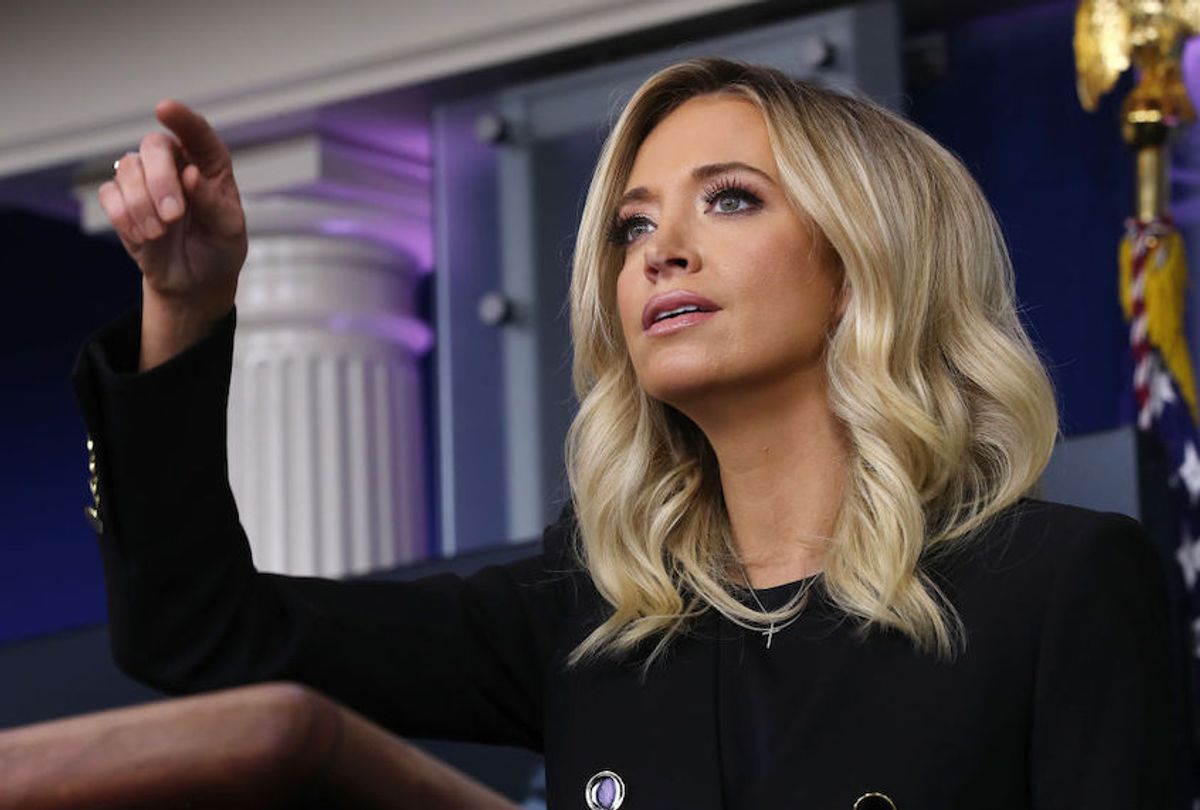 "I will never lie to you," new White House press secretary Kayleigh McEnany told reporters at her inaugural press briefing on Friday — the first such briefing in 417 days.

But her 32-minute performance was thick with misrepresentations and misinformation, from her bald attempt to rewrite what Donald Trump had said the previous day about the origins of the novel coronavirus to her wildly dishonest quotations from FBI notes.

There was much more, but I'll stick with those two for now.

On the matter of the origins of the virus, a little background: The New York Times on Thursday reported that White House officials have been leaning on intelligence agencies to find evidence that it originated in a government laboratory in Wuhan, China. Experts generally consider that unlikely at best, a conspiracy theory at worst. (See Vox, NPR, the Washington Post — and Salon — for more on that.)

But hours after that story came out, Trump unilaterally announced that the lab was in fact the source.

Asked if he had seen anything that gave him "a high degree of confidence that the Wuhan Institute of Virology was the origin of this virus," Trump answered "Yes, I have. Yes, I have."

It was only a matter of time before someone had to walk that whopper back. McEnany did it by simply denying that it ever happened.

Kudos to NBC's Kristen Welker for bringing it up, and sticking with it:

Welker: The president said yesterday that he has a high degree of confidence that the coronavirus originated in a lab in Wuhan, China, and yet his own intelligence agencies say they are still investigating. So, does the president have information — and has he drawn a conclusion — that the intelligence community has not yet?

McEnany: [Reading from notes.] Well, the president's statement is consistent with the other intelligence assessments. While we continue to have very limited and dubious data from China, current assessments indicated that President Trump's statement is consistent with what some analysts believe is the epicenter of where the virus began. And I would note the intelligence statement you are referring to makes two points. One, that this virus originated in China; and two, that it began through contact with infected animals or was the result of an accident at a laboratory in Wuhan. So, I consider that consistent with what the president said, that he has seen intelligence suggesting it could be in a Wuhan laboratory.

Welker tried to follow up, but to no avail. McEnany was ready with a memorable if meaningless bit of word salad:

McEnany: No, you know, let me remind everyone: Intelligence is just an estimate, essentially, and it is up to policymakers to decide what to do with that intelligence. In this case, the policymaker is the president of the Unite States and he'll make that decision at the right time.

Without even waiting for a question, McEnany brought up the case of Trump's former national security adviser, Michael Flynn, who pleaded guilty in 2017 to lying to federal investigators.

Newly unsealed documents have been aggressively misinterpreted by Flynn's supporters — including Trump himself — to suggest that Flynn was railroaded, or maybe even innocent.

McEnany twice mischaracterized notes taken by Bill Priestap, the former head of the FBI's counterintelligence division, before an interview with Flynn.

The FBI by that point already knew that Flynn had spoken by phone to a Russian diplomat and had lied about it, potentially opening him up to Russian blackmail.

Priestap wrote: "What's our goal? Truth/admission or to get him to lie, so we can prosecute him or get him fired?"

As former Obama ethics czar Norman L. Eisen wrote in a New York Times opinion piece on Friday: "Given the gravity of the situation, it would have been malpractice not to at least ask those questions as they prepared."

But McEnany mischaracterized the FBI note to suggest that it was evidence that Flynn was being set up.

"We have a handwritten FBI note that says, quote, we need to get Flynn to lie, quote, and get him fired," she said.

Eisen, for his part, noted on Twitter that he was fully expecting this kind of dishonesty from the White House:

How will it be reported?

Despite her long history of bullshit and lies, McEnany was the subject of a glowing profile in the New York Times last week.

And the press corps on Friday certainly didn't take advantage of the opportunity to ask McEnany about any of her previous statements, like this Feb. 25 doozy:

So it's not at all clear whether Washington reporters will focus on McEnany's deceit and cluelessness, as they should, or simply serve up her quotes without context.

The initial signs are not good. Some reporters on Friday tweeted McEnany's comments stenographically.

Jill Colvin and Deb Riechmann of the Associated Press reported on McEnany's vow not to lie, with no evident irony.

If you go back to Sean Spicer's first briefing, sure. But no further.

There has always been some lying at White House press briefings. But not nonstop. Not so bold. Not in such blatant contradiction to what we can see with our own eyes and hear with our own ears.

There's been an ongoing debate about the value of Trump's coronavirus press briefings. For a long time I thought they were worth broadcasting live — as long as they were accompanied by running commentary — and worth attending, so reporters could confront Trump with reality. Now I think they're too dangerously stupid for the media to do either.

But however you feel about them, on occasion they serve up some news value in there somewhere.

By contrast, I am at a loss to come up with a single question that McEnany would conceivably answer in a way that would add anything true or useful to the information ecosystem.

The only value I see is to illustrate the bottomless duplicity of this administration.