What's new on Netflix in May, from a bumbling "Space Force" to a flower reality competition show

Whether it's stand-up, true crime, documentaries or comedy, Netlfix has binge offerings to escape reality 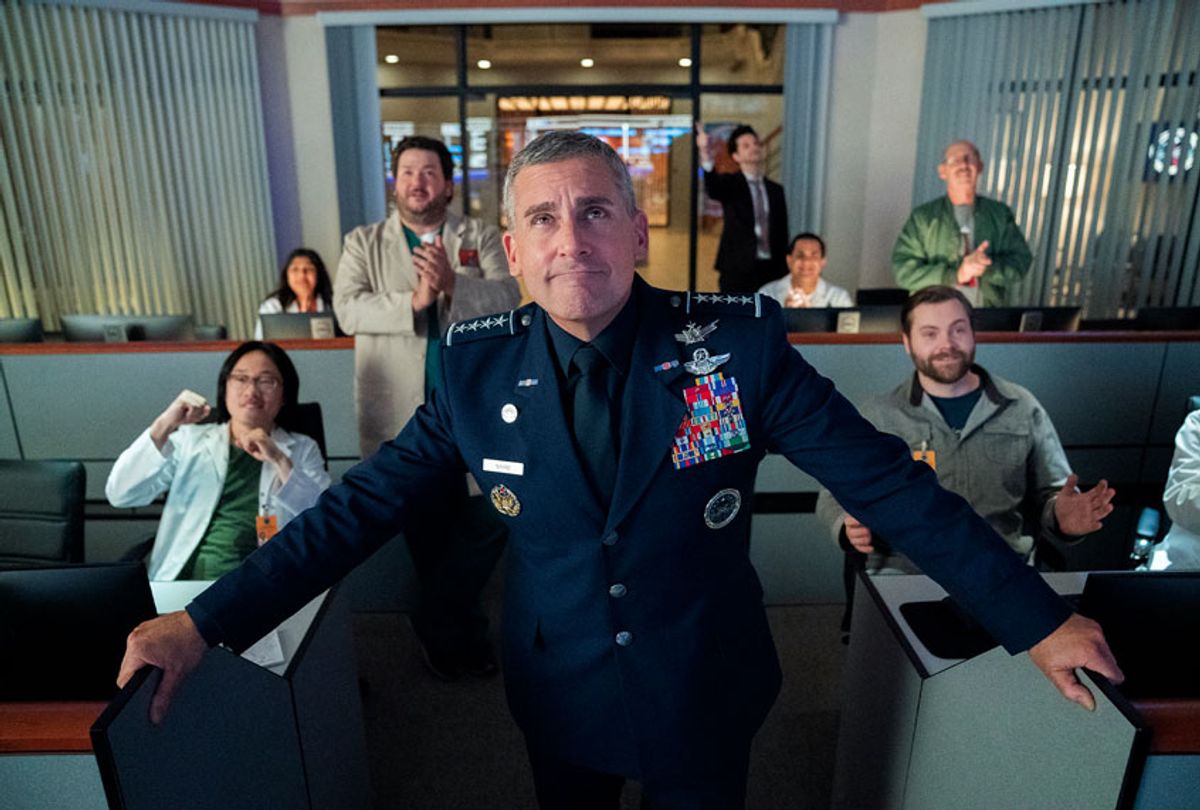 As the nation is embarking on another month of stay-at-home orders, at least Netflix has you covered on for new quarantine content, including several of the best movies available to stream in May. From Ryan Murphy's glitzy alternate history set in Hollywood's Golden Age to "The Eddy," a series about the criminal underground that operates alongside a Paris jazz climb,here are some definite bingeworthy series.

If you're looking for something a little lighter, "The Big Flower Fight," a reality show about floral designers, or the third season of "Somebody Feed Phil" promise to be two really lovely, gentle viewing options.

Additionally, this month sees the return of comedians Jerry Seinfeld, Patton Oswalt and Hannah Gadsby, who all have May stand up specials.

Check out highlights of what's coming to Netflix, followed by the full list:

This is just one of many of the movies available to stream in May. It took 12 long years before Alice Wu was able to make her follow-up project to the acclaimed debut "Saving." In this high school tale, a small-town jock asks orchestra nerd Ellie Chu (Leah Lewis) for help wooing his crush with love letters.

Brought to you by producers Ryan Murphy and Ian Brennan — who previously collaborated on "Glee" and "The Politician" — "Hollywood" follows a group of aspiring filmmakers and actors who are trying to make it in Hollywood during film's Golden Age. It's an inherently cutthroat environment, built on a foundation of unfair biases across race, gender, and sexuality that continue to this day. But in the alternate history of "Hollywood," Murphy contemplates what the environment landscape would look like if these power dynamics had shifted and been dismantled.

Master comedian Jerry Seinfeld is back on stage, where he'll discuss talking versus texting, bad buffets versus so-called "great" restaurants, and the magic of Pop Tarts. Per Netflix's description, the special features a "spectacular arrival" to the Beacon Theatre in New York City, and showcases Seinfeld's sharp angles on everyday life, uncovering comedy in the commonplace.

Salon's Melanie McFarland described the first season of "Dead to Me," which features stellar performances from Christina Applegate and Linda Cardellini, as a deck of cards that shuffles well, but is missing something.

"Playable as long as you overlook the fact that it's missing an ace or two," she wrote. "Which is quite lovely if you just want to be distracted by a series of satisfactions. Given the right circumstances — or even the worst circumstances a person can be in — a show like this could be exactly what a person needs."

Applegate plays Jen, a widow who lost her husband, Ted, in a hit-and-run accident, while Cardellini plays Judy, a woman who lost her fiance to a heart attack They meet in a therapy group for grieving spouses and partners. Over the course of the season, their friendship blossoms, while Jen tries to unravel the mystery of Ted's death.

Little does she know that Judy has a frightening secret life of her own as she deals with flashbacks of hitting someone with her car (you see where this is going). Season 1 ends with the two women looking at the bloody body of Steve, the man who was in Judy's passenger seat the night of her car accident.

This season picks up with the women struggling to hide this new, dark secret while also contending with the arrival of a surprising new visitor in town.

In this Netflix original directed by "La La Land" Oscar winner Damien Chazelle, a struggling Paris jazz club owner gets tangled up with dangerous criminals as he fights to protect his business, his band ,and his teenage daughter. Created by English screenwriter Jack Thorne — known for this work on "The Last Panthers," "The Fades" and "Glue" — "The Eddy" stars André Holland, Joanna Kulig, and Amandla Stenberg.

"Have a Good Trip: Adventures in Psychedelics," May 11

In this Netflix documentary, celebrities like Sarah Silverman, Nick Kroll, A$AP Rocky, and Nick Offerman talk about some of their most mind-bending trips — through animation, reenactments and interviews — as a way to explore the history and global effect of psychedelics.

How has television changed court cases? This Netflix documentary series posits that the transformation has been immeasurable, as real courtroom dramas are increasingly packaged and viewed as a form of true crime entertainment. Over six episodes, "Trial by Media" explores the ways the press contribute to the narratives of the guilty and innocent — before, during and after a trial.

We've seen cutthroat kitchens, dueling fashion models, and even high-stakes glass art — and now the reality television competition format has come for the world of flowers. In "The Big Flower Fight,"  florists, sculptors and garden designers push their talents to the limit to create extravagant floral installations in this competition show hosted by Vic Reeves and Natasia Demetriou. The ultimate prize? A chance to display their own sculpture at London's Royal Botanic Gardens.

This promises to be perfect viewing for those of us who are sheltering in place and miss the great outdoors.

"Patton Oswalt: I Love Everything," May 19

In "I Love Everything," comedian Patton Oswalt takes the stage to talk about embracing life in his 50s. He'll cover topics ranging from finding love again, to how attending his daughter's second-grade art show cost him the chance to board a full-scale Millennium Falcon, to experiencing existential dread at Denny's.

(By the way, stick around post-credits for "Bob Rubin: Oddities & Rarities," a bonus one-hour comedy special presented by Oswalt.)

Her tender, but stunning stand-up special "Nanette" catapulted Hannah Gadsby to international acclaim. Now, she's back with "Douglas," in which the comedian discusses popularity, identity, language, feminism, and more. Per Netflix, this genre-bending special is named after one of her dogs "in the hopes he could inspire comedy obedience."

Led by Steve Carell and John Malkovich, this original comedy series tells the story of a begrudging military general and an eccentric scientist who are tasked with preparing the military's newest branch — The Space Force — for lift off. The series also stars Jimmy O. Yang, Jessica St. Clair, Tawny Newsome, Noah Emmerich, and Ben Schwartz.

Armed with hunger, wonder and some light Dad energy, "Everybody Loves Raymond" creator Phil Rosenthal is ready to travel the world again. This season, he'll sample the cultures and cuisines of Marrakesh, Seoul, Montreal, Chicago, and London.

Here's a list of everything coming to Netflix this month:

"All Day and a Night"
"Almost Happy"
"Get In"
"Go! Go! Cory Carson: The Chrissy"
"The Half of It"
"Hollywood"
"Into the Night"
"Medici: The Magnificent" Part 2
"Mrs. Serial Killer"
"Reckoning" Season 1
"Ace Ventura: Pet Detective"
"Back to the Future"
"Back to the Future Part II"
"Charlie and the Chocolate Factory"
"Cracked Up, The Darrell Hammond Story"
"Den of Thieves"
"For Colored Girls"
"Fun with Dick & Jane"
"I Am Divine"
"Jarhead"
"Jarhead 2: Field of Fire"
"Jarhead 3: The Siege"
"Madagascar: Escape 2 Africa"
"Masha and the Bear" Season 4
"Material"
"Monthly Girls' Nozaki Kun" Season 1
"Sinister"
"Song of the Sea"
"The Curious Case of Benjamin Button"
"The Heartbreak Kid"
"The Patriot"
"Thomas & Friends: Marvelous Machinery: A New Arrival"
"Thomas & Friends: Marvelous Machinery: World of Tomorrow"
"Thomas & Friends: Thomas and the Royal Engine"
"Underworld"
"Underworld: Evolution"
"Underworld: Rise of the Lycans"
"Urban Cowboy"
"What a Girl Wants"
"Willy Wonka & the Chocolate Factory"

"18 regali"
"Chico Bon Bon: Monkey with a Tool Belt"
"Dead to Me" Season 2
"The Eddy"
"The Hollow" Season 2
"House at the End of the Street"
"Restaurants on the Edge" Season 2
"Rust Valley Restorers" Season 2"Valeria"

"Bordertown" Season 3
"Have a Good Trip: Adventures in Psychedelics"
"Trial By Media"