As with Vietnam in the 1960s, COVID-19 is exposing racial fault lines in the U.S. 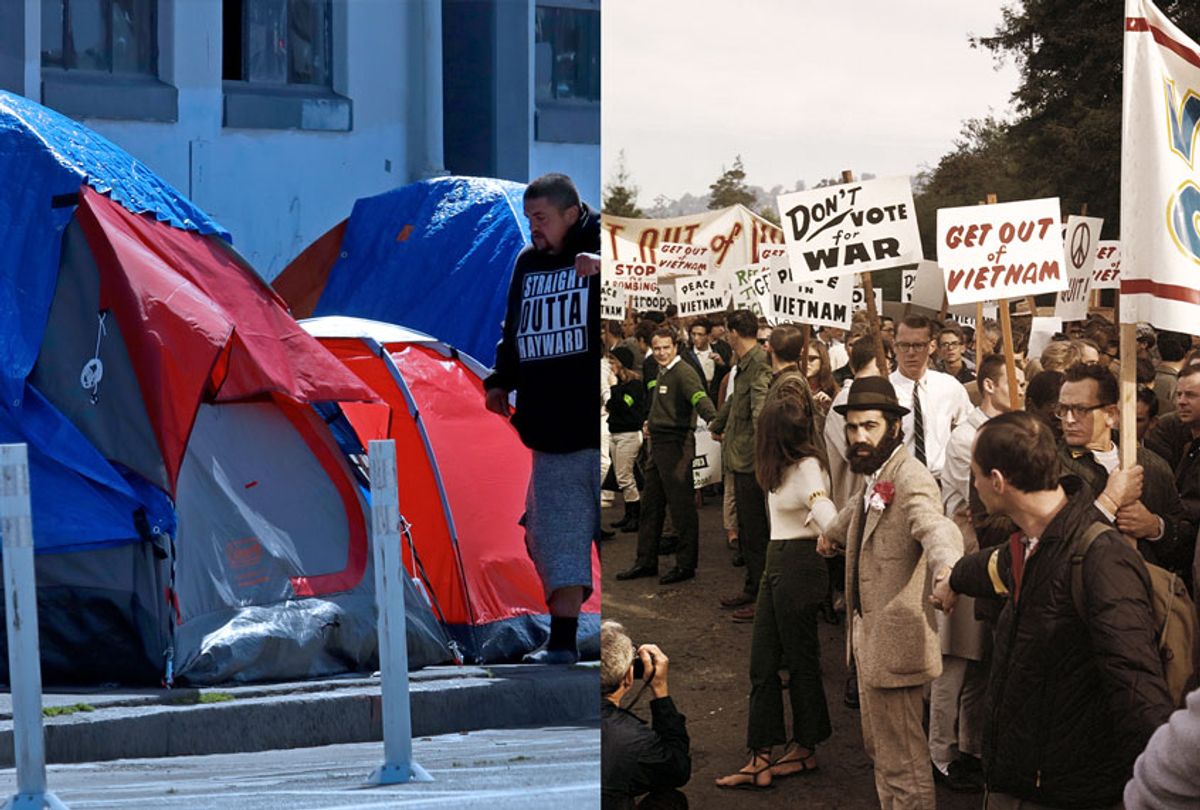 Tents near the MSC South homeless shelter, where at least 70 people have now tested positive for COVID-19 | Demonstrators march against the war in Vietnam
--

As in any country as unequal as the United States, the calamities of war and pandemics are not shared equally. For those who are poor or born black or brown, death is more likely both at home or on some distant battlefield. The latter was true in the 1960s during the Vietnam War, when there was a compulsory military draft, just as it is true today with the invisible war against the coronavirus.

One May night in 1969, eighteen activists including myself broke into the office of the draft boards on Chicago's largely black South Side, dragged around 40,000 paper records of draft-eligible men out to the parking lot, and set them ablaze. The press arrived, then the police. We were swiftly hauled off to jail.

The first such form of civil disobedience against the Vietnam War and the draft occurred a year earlier in Catonsville, Maryland, led by Father Phil Berrigan and his brother, Dan. They burned hundreds of files with a kind of home-made napalm. At a secret meeting, Phil proposed a much larger action than Catonsville, linking war and racism by targeting the central repository of twenty different draft boards in Chicago which contained the records of hundreds of thousands of young men, mostly from the sprawling, South Side black ghetto.

At the time, I was twenty-three. Why did I risk my liberty, and my future? Why did we select the South Side of Chicago in particular to make our statement of conscience?

I remember staring at a flyer publicizing an upcoming anti-war protest. It showed a photo of a naked Vietnamese child running down a dirt track in panic. Her village had been set on fire by napalm, dropped by American aircraft. Her facial contortions made her terrible screams feel almost audible. Our government was responsible for so much suffering and death. Rallies and marches weren't effective, I felt — small tokens of dissent without much risk. This action, of burning draft cards, was real, visible, and well-aligned with my non-violent ideals.

At home, the violence of the war reinforced and perpetuated deep-seated institutional racism. Our so-called enemy were labeled "gooks," a demeaning term for Southeast Asians. The draft, formally known as the Selective Service System, wasn't blind to either color or class. By 1969, 56% of black Americans opposed the war into which they were disproportionately drafted. When he refused induction into the Army, Muhammad Ali famously proclaimed: "Why should they ask me to put on a uniform and go ten thousand miles from home and drop bombs and bullets on brown people in Vietnam while so-called Negro people in Louisville are treated like dogs and denied simple human rights?"

My federal trial began a year later, presided over by a judge who considered the motives behind our civil disobedience irrelevant. I and four other defendants tried a novel defense of insanity so we could be heard by the jury. We were insane because we held the belief that the Vietnam War was sheer carnage, and that the draft was fundamentally skewed to sentence poor and minority men to Vietnam.

African-Americans represented less than 15% percent of the population in 1969, but made up over 40% of draftees. Their families couldn't afford to keep their sons in college or get some cop-out deferment, like Trump's rich father did with a "bone spur." Too often, the future of draftees was a flag-draped coffin.

Our message that May night in 1969 still holds true in the light of history, that there is a fateful and terrible connection between racism and war. I have no regrets about burning thousands of draft files, a felonious act which hopefully saved lives.

Some believe that war and disease are the "great equalizers". Rather, they reveal the underlying institutional inequities of race and class all to clearly. And today, in the midst of a terrible epidemic, I am speaking truth to power again.

Racial and economic disparities in the US are killers. More than 30 million people in this country have no healthcare insurance, can't afford prescriptions, have no preventive care, or adequate access to hospitals. These Americans don't live in Beverly Hills, California or Winnetka, Illinois.

Too many African Americans live in a food desert, where healthy food is neither available or affordable. As a result, coming into this period of a deadly global virus, this community has so many underlying diseases like diabetes and heart disease, untreated medical problems, and live in crowded rooms in densely populated cities. And now during the lockdown, no jobs.

Thousands show up in emergency rooms as a last resort. Too, too many die.

Just look at Chicago, the city of our draft action. Dr Allison Arwady, Chicago's public health commissioner, told reporters that black city residents already live on average about 8.8 years less than their white counterparts. Black Chicagoans account for half of all coronavirus cases in the city and more than 70% of deaths, despite making up only 30% of the population.

Other cities with large minority populations, including Detroit, Milwaukee, and New Orleans, have become deadly hotspots, and their patterns of illness and death mirrors Chicago. In New York City, the epicenter of the pandemic, black and Latino Americans are succumbing to the virus at a much higher rate than white New Yorkers.

No, the burden of war and disease is not shared equally. What is happening now in our poor and minority communities is as criminal as it is negligent. That night in 1969, at least a dozen police ran towards us with their guns drawn. I took a deep breath, trying to slow my shallow, panicky breathing. We sang the anthem of the Civil Rights Movement, the words of Dr. King's final sermon. Our voices were hardly audible in the chaos around us. We sang to ourselves, to the person next to us.

We shall overcome, some day.

Oh, deep in my heart, I do believe

We shall overcome, some day.

The next day, sitting in the Cook County Jail, I picked up a copy of the Chicago Tribune in the day room, which carried a snippet of our press statement. It read: "As white Americans, we bear a special responsibility with regard to the Selective Service System and the war machine it feeds. In our elimination of part of the death dealing and oppressive system, we mark the prelude to the creation of life and freedom."

I believed then, as I do now, that acts of conscience are necessary when injustice exists on a massive scale, when rulers manipulate the public with fear and lies. Such was the case during the illegal and bloody Vietnam War, and such is the case today as we face this pandemic. Social distancing does not mean ignoring the fate of our neighbors. Whatever we do, by our vote, by our acts of kindness, by our organizing, by our individual acts of courage, we must speak the truth about structural racism and its deadly consequences.

Emily L. Quint Freeman is the author of the memoir "Failure to Appear: Resistance, Loss, and Identity," which was released March 1, 2020 for Women’s History Month. She has been interviewed on CNN Evening News, NPR’s All Things Considered, and numerous other media outlets.  www.emilyqfreeman.com.