One of COVID-19's unlisted side effects: An increase in police power

Instead of investing in public health infrastructure, America is doubling down on the surveillance state 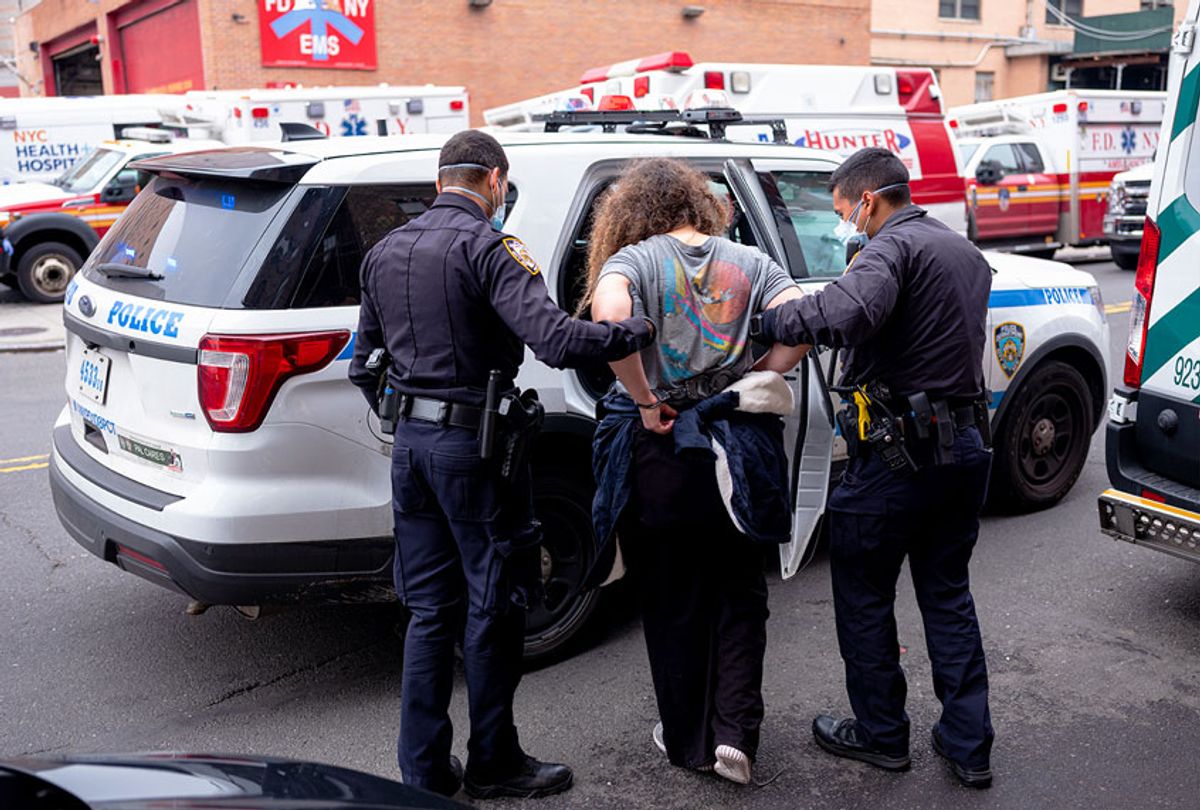 As governments across the globe expand mass surveillance programs in the name of public health, activist and whistleblower Edward Snowden warns that we are watching them build "the architecture of oppression." Perhaps more insidious are new measures that simply expand the power and discretion of the police to "enforce social distancing" in the name of flattening the curve — many of which were passed swiftly in just the past few weeks.

The UK Parliament passed a bill that gives the government "the power to detain and isolate people indefinitely, ban public gatherings including protests, and shut down ports and airports . . . with little oversight," the New York Times reports. Australia introduced sweeping new legislation that gives police "the power to fine or arrest people caught gathering in groups of more than two or for being outside of their homes without a "reasonable excuse." France put 100,000 additional police officers on the streets to enforce their 15-day lockdown. In Peru, military troops patrolled a key portion of the city center, stopping vehicles and allowing only emergency and medical vehicles through. Vietnam has been sending citizens to military-run quarantine camps. Police in the Philippines have reportedly been "subjecting people who violate the national lockdown to violent punishment, including locking them in crowded dog cages." All over the world, countries are treating police as troops in a so-called "war" against the coronavirus, giving them new powers to impose social order.

Americans may be tempted to view these measures as foreign authoritarianism. But the U.S. itself has a history of curtailing individual rights and civil liberties in the name of public health and safety. Some of the most notorious examples in the two decades since 9/11 have involved the expansion of intelligence agencies' surveillance powers and capabilities, with scant evidence that Americans are living safer lives as a result.

Privacy advocates like Snowden are right to fear that the coronavirus will provide new grounds for this extension of the security state's reach into all Americans' lives. Yet we should be equally  concerned about relying on police in the streets to enforce public safety measures. Long before this pandemic, immigrant communities and poor people of color in the U.S. had been living under the yoke of an aggressive police state. The expanded empowerment of police forces on the ground in the "war" against the coronavirus will further trap many vulnerable Americans in existing structures of oppression.

We have little reason to believe police will equitably enforce social distancing measures without racial and class biases. Police already disproportionately focus their attention on marginalized people in the United States; indeed, police have outsized presences in lower income neighborhoods. While numerous states are implementing fines of up to $10,000 for violating physical distancing rules, these huge sums for the poor are mere entry fees for the rich to continue living normally. But working-class people are the most likely to be out in public spaces during the pandemic and are less likely to have the kinds of jobs that allow them to work from home.

Further, public housing is overcrowded, housing insecurity is rife and over 500,000 people in the U.S. are without a home at all. Early data already shows that COVID-19 is hitting Black communities disproportionately harder than others. Enduring racial and class hierarchies are compounding the crisis as workers in low-paid yet "essential" jobs are more likely to be poor people of color. Meanwhile, the police have made few arrests and are apparently reluctant to issue fines to the right-wing protesters gathering in state capitals for "freedom rallies." The often heavily-armed, mainly white participants have displayed a near-total lack of social distancing at these rallies.

We continue to see videos of police violently "enforcing" social distancing by physically forcing individuals off of train platforms and public busses. In Philadelphia, after the public transit agency SEPTA issued unclear orders about wearing masks on public busses, one man was brutally pulled off a bus for not wearing one. The woeful lack of personal protective equipment (PPE) forecloses better solutions — like the police simply handing masks to the unmasked. NYPD officers were shown violently arresting a man for not "spreading out" on a crowded train platform after he told them there wasn't anywhere for him to go. There's a grim irony in the police officers flouting social distancing directives in order to grab and detain the man.

Moreover, the state of Florida said it would deploy National Guard troops to intercept travelers from the New York City area at airports. Milwaukee's Common Council president warned that ignoring social distancing would result in arrests. In New York City, where police have been particularly aggressive, The Intercept reported "officers have a lot of discretion in their encounters with the public and can arrest people under vague charges like disorderly conduct, obstructing government administration, or resisting arrest." Across America, it appears the only option people have if they want to report noncompliance is to call the police. But the police are far less equipped (and motivated) to keep the public safe than we may like to believe.

Aggressive policing during a pandemic harms the public

Rather than centering public safety, police are actively endangering people who must continue to live their lives during the pandemic — and blaming them for the danger. One former police officer apparently let the truth slip: going forward, he said, "people are going to be charged with more charges or more serious charges than they otherwise would because they put the officers in more danger." This attitude, that police lives are more valuable than others by virtue of their occupation, simply cannot be conducive to public safety.

Meanwhile, police forces across the board appear to exempt themselves from following social distancing measures and best safety practices. Six to ten officers can physically team up on one person in the name of protecting the surrounding bystanders. Often the police do not wear masks or gloves. The consequences of such nonsensical practices are swift and obvious: in New York City, the police department's infection rate was at least 3.8 percent at the end of March, "far higher than the city's overall 0.5 percent." Enforcing social distancing in the highly physical ways that police have been using endangers themselves, too.

The consequences for people targeted by the police are all the more dire, especially when police interventions lead to arrests. Coronavirus cases are swelling among jail and prison populations all over the country. Immigrations and Custom Enforcement (ICE), too, is contributing to the spread of coronavirus by continuing raids on undocumented people during the pandemic. The concentration camps at the U.S.-Mexico border are cesspools of health hazards where social distancing is impossible. Robyn Maynard and Andrea Ritche said it best: "It's hard to imagine a more counterintuitive and twisted approach to reducing transmission" of the virus.

Activist groups have warned that we risk sleepwalking "into a permanent expanded surveillance state" as governments implement heightened mass surveillance during the pandemic. But perhaps what's less apparent is that many Americans have already been living in a coercive police state. These structures of oppression have been nearly invisible to many of us. The people who responded to stay-at-home orders with outrage and talk of government overreach are barely getting a taste of how immigrants, the working class and people of color have been treated by the police for much longer.

Police forces in the U.S. were designed to protect private property, not public safety. Indeed, they are not even legally obligated to protect the public. In December 2018, a federal court upheld that the police "have no duty to provide protection to citizens in general." That the police are actually endangering the public during the pandemic should then come as no surprise. Police originated as slave patrols in the 1700s and evolved into essentially security for the rich, paid for by the public. Police regularly escalate tense situations into explosive violence that harms more than it prevents or protects, and their current social distancing "enforcement" measures bear out this historic truth.

What's clear is that police enforcement is not about public health. It's about social control. Consider how officers are physically manhandling people, and many cities' refusals to release nonviolent prisoners during a pandemic in which the virus is spread by close physical contact. It's about whose lives we value more—so-called "essential" workers are being treated as disposable. They're disproportionately exposed to danger, both from the virus and the police, for the privilege and profits of a few.

A common justification for authoritarian actions during times of crisis is that the public is prone to panicking and losing control, but social scientists agree that in emergency situations, people actually "tend to be more cooperative and more generous toward others than they may normally be." In the wake of Hurricane Katrina, for example, it wasn't the police who protected people from roving white militias. It wasn't FEMA or NGOs who provided food and medical care after Harvey and Sandy. It was networks of neighbors and volunteers who calmly took matters into their own hands. People cooperated, not competed. They made decisions democratically, not unilaterally. They provided mutual aid, not policing.

Mutual aid is a foundational concept of anarchist political philosophy. It's the idea that helping each other is crucial to our survival and intrinsic to our humanity. It's understanding that an individual's happiness and wellbeing is linked to the happiness and wellbeing of others. In the midst of the pandemic, people all over America are proving it true.

An antifascist group in Portland has made 225 gallons of hand sanitizer for frontline workers and people without homes. An antiracist group in New York City has made and delivered over 3,000 meals to families in the Bronx and East Harlem. Food Not Bombs in Philadelphia is delivering thousands of masks to essential workers. Professionals across the country are offering legal aid for rent strikers. This isn't charity meted out from above, but ordinary people helping their neighbors and peers in need.

As the pandemic continues to break down social, economic and political norms, it also lays bare how much of the pre-pandemic world was unjust and unnecessary. Very little of it was objective or inevitable. It's hard to remember a time before militarized police forces or before data surveillance. But if there were ever a time to imagine alternative paths to public safety and new ways of relating to each other, it's now.

Mary Steffenhagen is a writer and candidate for an M.A. in journalism at The New School for Social Research. She writes about labor organizing, religion’s influence on politics in America and YouTube rabbit holes. She tweets at @MarySteffenhag1.