Jared Kushner reportedly in charge of push for vaccine — what could go wrong?

Trump's son-in-law has been tasked with fast-tracking a coronavirus vaccine. As usual, it's all smoke and mirrors 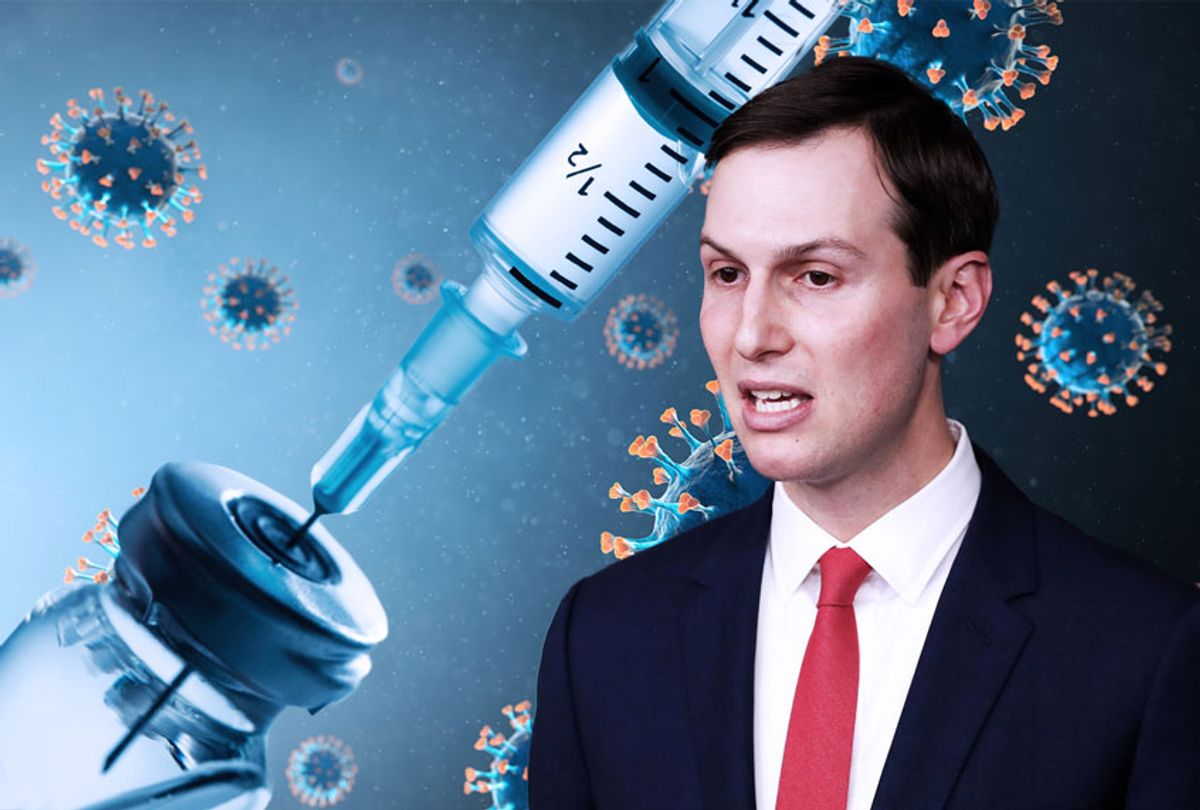 President Trump has turned to Jared Kushner, his son-in-law and senior adviser — whose shadow White House coronavirus task force is currently the subject of a congressional whistleblower complaint — to captain the administration's effort to fast-track a coronavirus vaccine.

The project, titled "Operation Warp Speed," yokes Kushner together with senior White House adviser Peter Navarro, who first floated the idea to the administration in February, the Daily Beast reports.

Kushner, whose ludicrously overstuffed portfolio and maladroit management routinely draw fire from critics, was reportedly tapped to "engage the private sector," an alleged Kushner strength that is also the main focus of the whistleblower complaint filed to Congress in early April.

"Jared has been vocal in meetings about wanting to engage the private sector on the development of a vaccine in a similarly successful way that the administration did on ventilators, PPE, and others," a White House official told the Beast.

That complaint alleges that Kushner's team of private-sector volunteers, tasked with securing personal protective equipment for hospitals around the country, had little experience or understanding of the issues Kushner assigned them, and had been directed to prioritize outside requests from Trump loyalists, such as Fox News personalities.

"Americans are facing a crisis of tragic proportions, and there is an urgent need for an effective, efficient and bold response. From my few weeks as a volunteer, I believe we are falling short," the complaint says.

The administration has officially acknowledged Operation Warp Speed — technically under the purview of the Department of Health and Human Services — but its plans and the means available to execute on those plans are murky, beyond vague promises to pull resources from private companies and the Pentagon, and to use those connections to somehow speed up testing.

Kushner has long been dogged by his many conflicts of interest in the private sector, in ventures both domestic and foreign, such as in Saudi Arabia and an early project in China. That track record has, perhaps unsurprisingly, extended into the administration's coronavirus response.

Trump routinely gripes about the necessary tedium of developing a safe and effective vaccine, a process that often demands a decade or longer, and has said he wants a COVID-19 vaccine to become available by year's end.

"I mean, I like the sound of a couple months better, if I must be honest," Trump said, seemingly oblivious to the fact that the "couple months" timeframe mentioned by some pharmaceutical executives merely referred to a vaccine being ready for trials.

Reached for comment, an NIAID representative pointed to the institute's direct involvement in the development of a COVID-19 vaccine, including at least three projects that have recently dipped a toe into clinical trials.

In the private sector, Moderna has said it could have a shot ready this fall, for trial in certain high-risk patients. Pfizer thinks it can have one ready by the end of the year, with the potential to "supply millions of vaccine doses by the end of 2020" and "rapidly scale up the capacity to produce hundreds of millions of doses in 2021." Sanofi and GlaxoSmithKline say their collaborative effort likely won't be available until the second half of 2021.

"We just do not see it happening [that soon]," a senior Trump administration official who works with the task force told the Beast.

Many public health and investment experts also believe these timelines are optimistic at best.

Cell biologist and vaccine expert Robert van Exen told the New York Times that the accelerated research timelines for vaccines currently in the works might make them more likely to fail. He projects a vaccine won't be approved until 2021 or 2022, but cautions that even this estimate "is very optimistic and of relatively low probability."

He added, however, that the severity of the emergency makes fast-tracking "worth the try — maybe we will get lucky."

Kushner might find the private sector even more bearish than the scientists. Geoffrey Porges, an analyst at health care capital investment firm SVB Leerink, has pointed out that timelines for more than 10 of the most important and widely used vaccines — from pathogen discovery to approval — have ranged from more than a decade to more than a century. (The mumps vaccine had one of the shortest development times, and that still took four years.) Trials alone for recently approved inoculants have taken longer than three years, Porges says.

Trump made his "couple months" remark at a White House gathering of pharmaceutical executives in early March. One exec had used that phrase in reference to a vaccine's readiness for clinical trials, not public distribution, as the president apparently interpreted it.

Trump then asked why scientists couldn't simply use the flu vaccine to inoculate against the coronavirus, asking no one in particular, "You take a solid flu vaccine, you don't think that could have an impact, or much of an impact, on corona?"

"No," one expert replied.

"President Trump made it clear to the task force weeks ago that business as usual wasn't good enough in the fight against the coronavirus, and vaccines are no exception," Michael Caputo, recently hired assistant secretary of public affairs at Health and Human Services, told The Daily Beast.

(Caputo, a former Trump campaign aide and a witness in Robert Mueller's investigation into the campaign's connections with Russian election interference, was recently revealed to have blasted out conspiratorial, misogynistic and racist tweets in the context of the coronavirus.)

"It's not impossible and yet the scientists are right: it's going to be very difficult," Caputo told the Beast. "When it happens, it will be an historic victory for all of America, led by a president who just wouldn't take no for an answer when it mattered most. Come to think of it, maybe that's what President Trump's critics really dislike about it."

Last month Trump fired Richard Bright, the scientist in charge of the federal vaccine response. Bright alleges he was forced out because he refused to acquiesce to the president's demands that he push hydroxychloroquine, an anti-malarial drug that became an object of Trump's obsession, but whose effectiveness against COVID-19 is disputed. A government retro-study trial found that the treatment might be deleterious, even deadly, in coronavirus patients.

HHS referred questions about Operation Warp Speed to the White House. The White House did not immediately reply to Salon's request for comment.