Jerry Stiller, "Seinfeld" and "Hairspray" actor and comedian, dies at 92

The Broadway star, husband to Anne Meara and father to Ben Stiller, died of natural causes 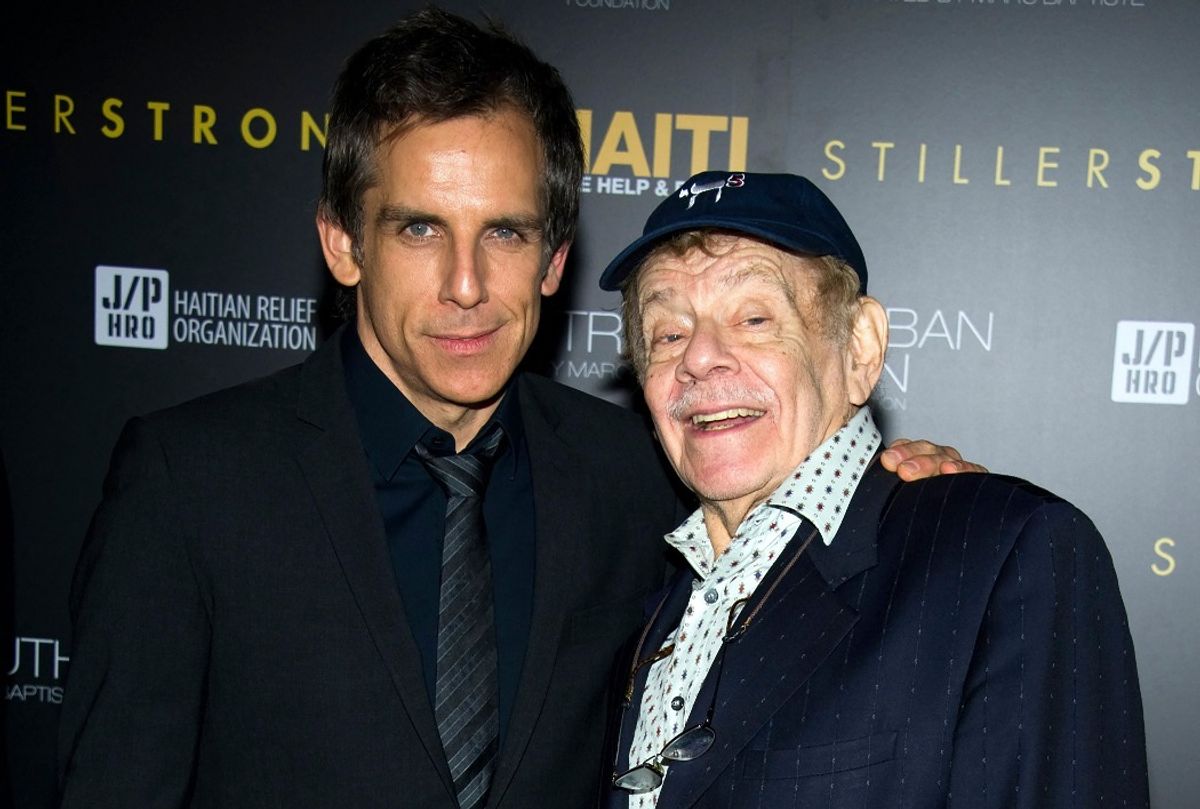 Jerry Stiller, an actor and comedian and father to Ben Stiller, has died of natural causes. He was 92.

Ben Stiller confirmed his father's death early Monday morning, writing on Twitter: "I'm sad to say that my father, Jerry Stiller, passed away from natural causes. He was a great dad and grandfather, and the most dedicated husband to Anne for about 62 years. He will be greatly missed. Love you Dad."

After a long career performing in comedy routines with his wife, Anne Meara, appearing on Broadway and guest-starring on TV series, Stiller became known for his role on "Seinfeld" as Frank Constanza, as Leah Remini's father on "The King of Queens," and as Zoolander's manager in the comedy directed by Ben Stiller.

He appeared in 26 episodes of "Seinfeld" as Constanza, the father of George (Jason Alexander), from 1993-98, with Estelle Harris playing his wife, Estelle. Stiller received an Emmy nomination for his work on the show in 1997.

Read More From Variety: The best TV shows you finally have time to watch

Though known as a comedian, Stiller was also a serious dramatic actor with a long history on Broadway.

Long before Stiller became known for his appearances on "Seinfeld" and "The King of Queens," Stiller and Meara, were a top comedy act in the 1960s, appearing on "The Ed Sullivan Show" some 36 times. The pair were also members of the improv group the Compass Players, which later became Second City.

Although Meara had in fact converted to Judaism when the couple got married, Stiller and Meara's material centered on the differences in their ethnic backgrounds, epitomized by their signature "Hershey Horowitz/Mary Elizabeth Doyle" routines. Meara died in May 2015.

On "The King of Queens," where he was a series regular from 1998-2007, he played the much-married Arthur Spooner, the father of Leah Remini's Carrie Heffernan.

Stiller appeared in both film versions of "Hairspray," the 1988 John Waters nostalgia trip in which he and Divine played the parents of Ricki Lake's Tracy Turnblad, and the 2007 Adam Shankman-directed feature adaptation of the musical based on the Waters film, in which Stiller played Mr. Pinky.

As gross-out sex comedies came to rule the day in recent years, Stiller found a niche for himself as the elderly comedian who would, with relish, say things not ordinarily expected of seniors.

An example was the Farrelly brothers' 2007 effort "The Heartbreak Kid," one of the dozen or so comedies in which Stiller appeared with son Ben. The Austin Chronicle said: "A man has not fully lived, comedically speaking, until his eyes and ears have been blessed with the experience of octogenarian Jerry Stiller as Doc, the crustily libidinous father of Ben Stiller's 40-year-old non-virgin bachelor, Eddie Cantrow."

Jerry and Ben Stiller first appeared together in the forgettable 1987 comedy "Hot Pursuit." In Ben's first feature directorial effort, 1994's "Reality Bites," Meara and sister Amy both had roles, but Jerry was absent except in the credits, where he was thanked.

Stiller and Meara starred in Joan Micklin Silver's 1999 feature "A Fish in the Bathtub," about a couple who have been bickering for decades, finally prompting the wife to move in with their son, played by Mark Ruffalo.

Demonstrating an ability to do drama, Stiller appeared in a supporting role as Police Lt. Rico Patrone in classics 1970s thriller "The Taking of Pelham One Two Three" and he later did "Homicide: Life on the Street" and two episodes of "Law & Order." More recently, he guested on "The Good Wife" in 2011 as Judge Felix Afterman.

Stiller was born on June 8, 1927 in New York City. He graduated from Syracuse University with a B.S. in speech and drama, and he also studied drama at HB Studio in Greenwich Village.

He made his Broadway debut in 1954 in the original musical comedy "The Golden Apple." He also appeared on the Rialto in a revival of "The Threepenny Opera," 1957 revivals of "Measure for Measure" and "The Taming of the Shrew," "The Power and the Glory" (based on the Graham Greene novel), "The Ritz" (1975) and "Unexpected Guests" (1977). In 1980, Stiller had the starring role in the Frank Langella-directed "Passione," by Albert Innaurato.

More impressive was David Rabe's Mike Nichols-directed "Hurlyburly" (1984-85), a caustic satire of Hollywood in which Stiller played a hack screenwriter. The New York Times praised his performance, writing, "The cast could not be better… Mr. Stiller, the sole representative of Hollywood's older, Jewish generation, is a frazzled amalgam of vulgarity and wounded vanity — loonily outfitted (by Ann Roth) in Western gear."

His first on-screen role was in 1956 in a segment of "Studio One in Hollywood." Later, Stiller was busy in the 1970s guesting on the likes of "The Courtship of Eddie's Father," "Love, American Style," "Phyllis" and "Rhoda"; the '80s brought guest gigs on "Hart to Hart," "Archie Bunker's Place," "Alice" and "Murder, She Wrote." The 1990s brought guest roles on "L.A. Law," "In the Heat of the Night" and "The Larry Sanders Show," in which he played himself.

His first effort as a series regular was CBS' brief "Joe and Sons" in 1975; next was NBC's 1988 effort "Tattingers," about a New York City restaurant in which Stiller's character was head chef.

In addition to the "The Taking of Pelham One Two Three," Stiller's early feature work included "Airport 1975" and the feature adaptation of Terrence McNally's farce "The Ritz," in which the actor played Carmine Vespucci (whom the actor played on Broadway), who targets his brother-in-law, Gaetano Proclo, played by Jack Weston, for assassination, prompting Proclo to seek refuge in what he doesn't realize is a gay bathhouse. In "Nasty Habits," a satire of Watergate applied to the politics of a convent, both Meara and Stiller appeared. He appeared in the odd Frank Langella vehicle "Those Lips, Those Eyes" in 1980, the Kim Basinger-Jeff Bridges starrer "Nadine" in 1987 and Paul Mazursky's "The Pickle" in 1993.

In 1999, Comedy Central aired a Friars' Club Roast of Jerry Stiller; the Roasters were drawn from several generations ranging from Meara and Alan King to Sandra Bernhard, Harvey Keitel and Michael McKean to son Ben and Jason Alexander.

Stiller was nominated for a Grammy in 2001 for best spoken word album for "Married to Laughter: A Love Story Featuring Anne Meara."

Though Stiller did not boast the kind of smooth voice that one usually associates with voiceover actors, he actually did quite a lot of work in this arena. He was the voice of Pretty Boy in ABC's animated series "Teacher's Pet" in the early 2000s and the accompanying 2004 straight-to-video film; Uncle Max in 2004's "The Lion King 1½"; Old White Mouse on Nickelodeon's "Wonder Pets!" in 2009; Principal Stickler on Disney Channel's "Fish Hooks" in 2010-11; Harvey in the Disney animated feature "Planes: Fire & Rescue" in 2014; and Murray Weiner in the 2014 NBC special "How Murray Saved Christmas."

Stiller and Meara shared a star on the Hollywood Walk in Fame, awarded in 2007.