We're taking the wrong lesson from the 1918 pandemic

If history serves as a guide, the rush to re-open the economy may not bode well 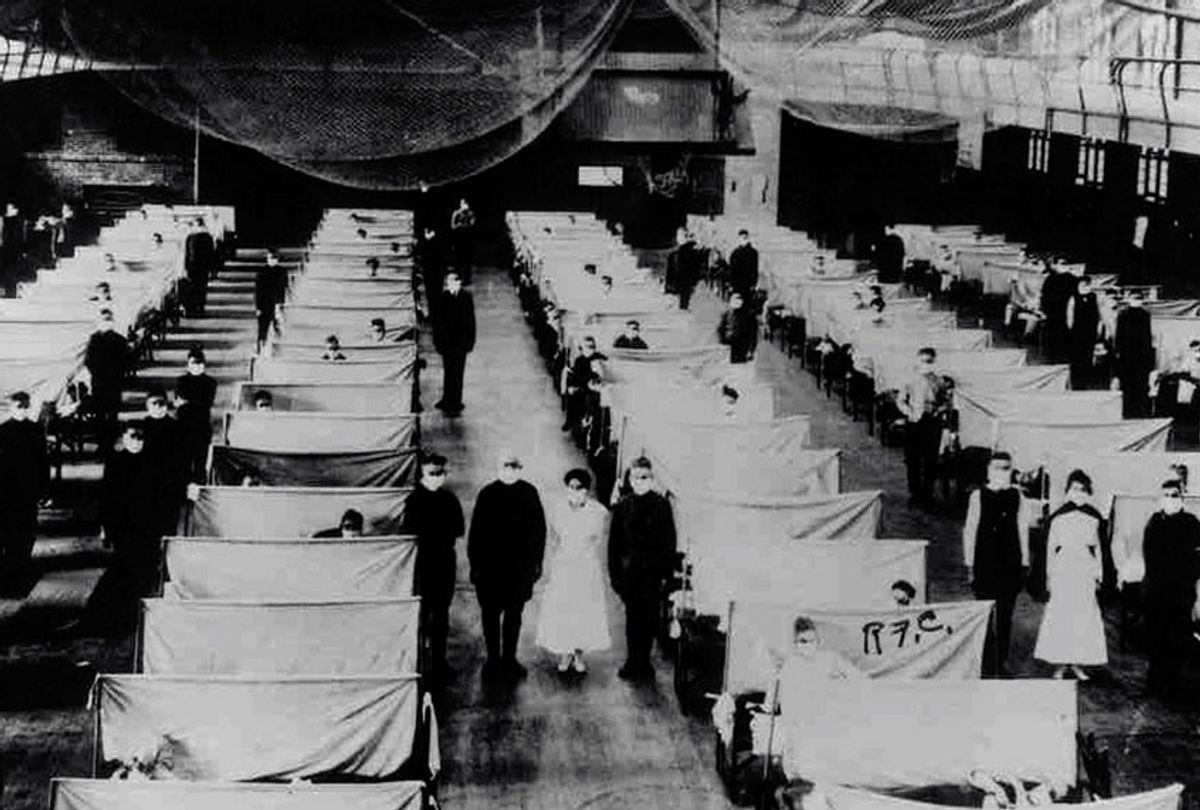 Warehouses that were converted to keep the infected people quarantined. The patients are suffering from the 1918 Influenza pandemic. (Universal History Archive/Universal Images Group via Getty Images)
--

As states across America plan to gradually reopen their economies, the lessons of the last major pandemic to hit this country — namely, the influenza epidemic of 1918-1919 — reveal that we should be more worried about how the disease will threaten our economic future, rather than how the public health reaction might threaten our economy immediately.

The 1918-1919 influenza pandemic was one of the worst in modern history, killing at least 50 million people worldwide including roughly 675,000 in the United States. It is estimated that 500 million people throughout the world were infected with the H1N1 virus, constituting roughly one-third of the global population. That pandemic was notable for having an unusually high mortality rate among already healthy people, and for a similarly high mortality rate for people under five years old, people between the ages of 20 and 40 and people above the age of 65.

Because Americans did not have the medicines necessary to effectively fight the pandemic, they were limited to non-pharmaceutical interventions that included quarantines, isolations and limitations in public gatherings.

Thomas A. Garrett, assistant vice president and economist at the Federal Reserve Bank of St. Louis, wrote in a November 2007 report that "most of the evidence indicates that the economic effects of the 1918-1919 influenza pandemic were short-term," with some sectors like entertainment and service losing money while others like health care manufacturers increased their profits. The pandemic had long-term economic ramifications, however, directly linked to its impact on public health.

"Some academic research suggests that the 1918 influenza pandemic caused a shortage of labor that resulted in higher wages (at least temporarily) for workers, though no reasonable argument can be made that this benefit outweighed the costs from the tremendous loss of life and overall economic activity," Garrett wrote. "Research also suggests that the 1918 influenza caused reductions in human capital for those individuals in utero during the pandemic, therefore having implications for economic activity occurring decades after the pandemic."

In March, another paper made a similar argument. Written by Sergio Correia from Board of Governors of the Federal Reserve System; Stephan Luck from the Federal Reserve Bank of New York and Emil Verner of the Massachusetts Institute of Technology (MIT) - Sloan School of Management, it argued that non-pharmaceutical interventions (NPIs) not only save lives but help the economy in the process.

"Using geographic variation in mortality during the 1918 Flu Pandemic in the U.S., we find that more exposed areas experience a sharp and persistent decline in economic activity," the authors write. "The estimates imply that the pandemic reduced manufacturing output by 18%. The downturn is driven by both supply and demand-side channels. Further, building on findings from the epidemiology literature establishing that NPIs decrease influenza mortality, we use variation in the timing and intensity of NPIs across U.S. cities to study their economic effects."

They concluded, "We find that cities that intervened earlier and more aggressively do not perform worse and, if anything, grow faster after the pandemic is over. Our findings thus indicate that NPIs not only lower mortality; they may also mitigate the adverse economic consequences of a pandemic."

This is not to say that Americans should downplay the human toll of a prolonged economic shutdown. As civil libertarian Conor Friedersdorf wrote in The Atlantic on Sunday, "If we knew that a broadly effective COVID-19 treatment was imminent, or that a working vaccine was months away, minimizing infections through social distancing until that moment would be the right course. At the other extreme, if we will never have an effective treatment or vaccine and most everyone will get infected eventually, then the costs of social distancing are untenable. We don't know where we sit on that spectrum. So we cannot know what the best way forward is even if we place the highest possible value on preserving life and protecting the vulnerable."

He added, "That uncertainty means, at the very least, that Americans should carefully consider the potential costs of prolonged shutdowns lest they cause more deaths or harm to the vulnerable than they spare."

More than half of America's states have either started substantially reopening their economies or have plans for doing so, according to The New York Times. The report noted that many of the states which are reopening have failed to meet the criteria recommended by the Trump administration on how to safely remove restrictions on social and businesses activities.

As of Monday more than 1.3 million people had been infected with COVID-19 in the United States, according to Johns Hopkins University, and nearly 80,000 had died.