Why some conspiracy theorists believe Bill Gates is behind the coronavirus

Some conspiracy theorists assert that Gates created the virus, or wants to sterilize people with vaccines 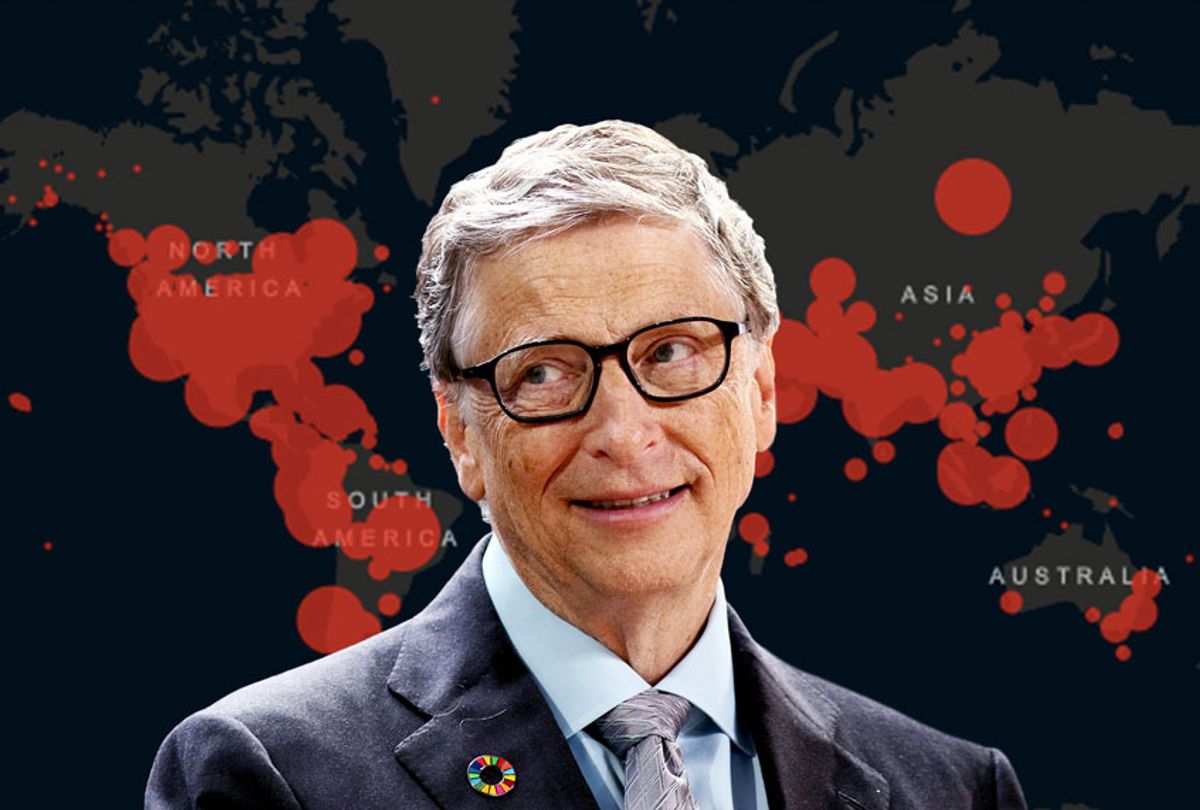 Microsoft co-founder Bill Gates, who says he warned President Donald Trump about the threat of pandemics in 2016, is the target of conspiracy theories claiming that he played a role in causing the pandemic. Beyond fringe websites and YouTube videos, such theories surrounding Gates' role in the pandemic have been spouted on cable news networks by prominent anchors.

Indeed, former Fox News and Fox Nation hosts Diamond and Silk — the stage names of Lynette Hardaway and Rochelle Richards — recently implied that Gates' desire for a vaccine was linked to a "population control" agenda. (They were later fired from the network for saying this.) Florida pastor Adam Fannin argued that Gates supports vaccination so he can implant "digital certificates" into people that would send information about COVID-19 infectees to the United Nations, and that Gates wants to "depopulate" the world.

Other conspiracy theories assert that Gates started the virus, knew it was coming, or wants to sterilize people with vaccines.

"When it comes to Bill Gates–kinds of conspiracy theories, there could be some political motivations behind this," Dr. Adam Enders, assistant professor of political science at the University of Louisville, told Salon. "He is a champion of various kinds of liberal causes. I'm sure that that's part of it for some people, but for others, the deal with Bill Gates is more so that he's just the quintessential powerful elite. He's rich. Everybody kind of knows who he is and he's just a great person to kind of pin the virus on."

Joanne Miller, an associate professor of political psychology at the University of Delaware, pointed out to Salon that the conspiracy theories about Gates could prove dangerous to public health.

"At the individual level, they can be dangerous," Miller explained. "Say, for example, with regard to ones about COVID-19: If individuals who believe conspiracy theories around the virus choose not to get a vaccination when one ultimately is available, that's both dangerous for them and for surrounding communities. If a greater percentage of people don't get vaccinated, obviously that's a problem for the whole community."

Enders explained that there are a number of variables which drive certain groups of people toward conspiracy theories.

"When it comes to most conspiracy theories you find causes in various political, social and psychological factors," Enders told Salon. "If we're talking about a conspiracy theory that alleges that a political party or a particular political figure has done something or is being harmed by some other political group, then it would make sense that people would believe like-minded people would believe those kinds of conspiracy theories. In my work, we find that people who believe that the threat of the coronavirus has been exaggerated to hurt president Trump are more Republicans than the Democrats."

Joseph E. Uscinski, a political scientist at the University of Miami, told Salon that the conspiracy theories about Gates are for the most part being propagated by people who already view the world through a conspiratorial mindset.

"Events and circumstances to them are best explained by shadowy conspiracies operating the dark rather than due to other explanations," Uscinski continued. "When this new thing pops up and captivates them like a pandemic, they're going to say it must be a conspiracy because that's the tool in the toolbox that they always reach for as an explanation."

He later added, "If people have beliefs that are disconnected from our shared reality, then their actions are going to be potentially dangerous."

Enders told Salon that, while it may seem counterintuitive, people also turn to conspiracy theories because they find comfort in them.

Because even public health experts don't have a lot of the answers that we really need at this point, people turn to conspiracy theories because they kind of wash away the random," Enders explained. "They help us impose some structure on the world. So if this conspiracy theory wasn't just sort of an accident that could happen any time and we could sort of be caught like this again, but it's a bio weapon, then we have some kind of malevolent force to blame. They did this to us. It's not our fault. We couldn't have foreseen it. And if it's a bioweapon, but maybe there was an antidote or something like that. So it reduces some of these anxieties and some of these uncertainties just a little bit."

He added, "If we're thinking that threat's exaggerated or something like that, then we can say, Democrats are just behind this."