The judicial system remains rigged but as this episode shows, we take the wins where we can and keep on fighting 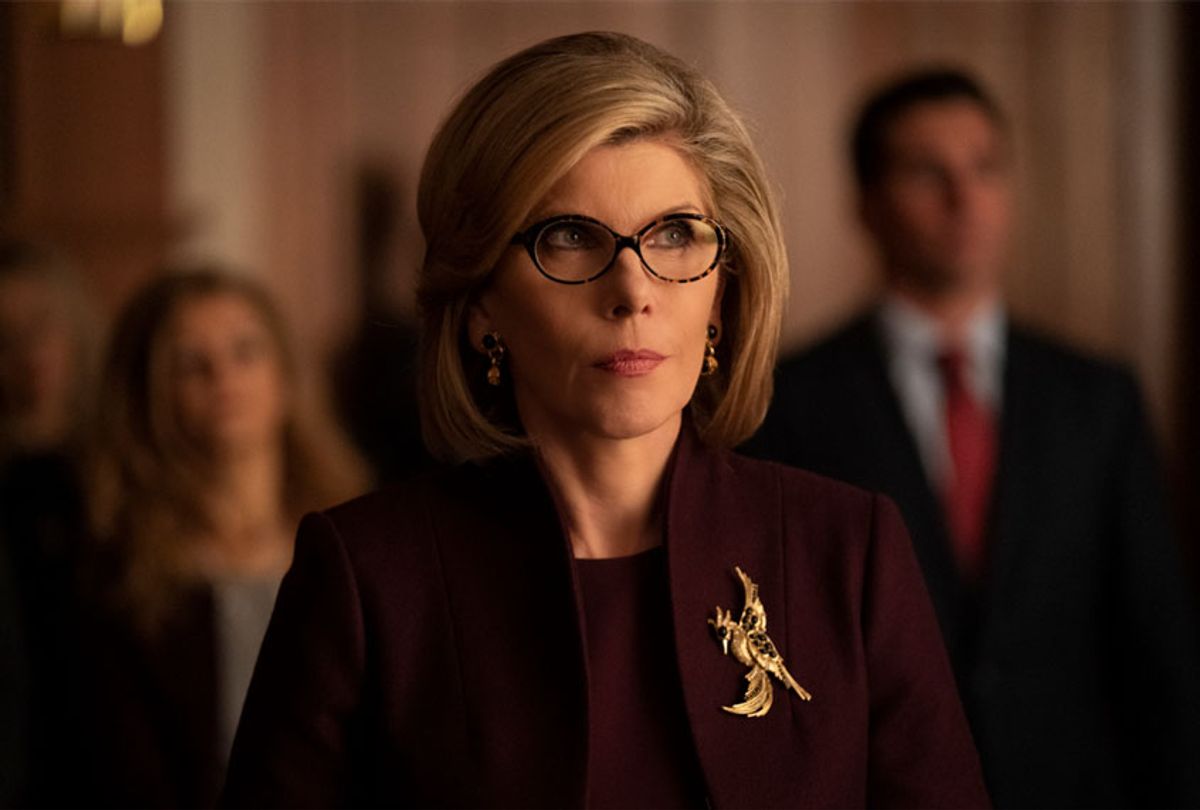 The current season of "The Good Fight," its fourth, was in the midst of production when the spread of the novel coronavirus that causes COVID-19 accelerated, forcing work to cease and its cast and crew to retreat to their homes. This explains why we're on the fifth episode six weeks after the season premiere.

This also is why two planned visual additions to the opening credits are instead described by placeholder cards. A slo-mo explosion of an expensive bottle of wine is followed by a text box that reads, "a sofa would have blown up here." A few beats later – after a creamer shatters, cups full of coffee burst apart and three phones explode one after another -- comes, "a conference table would have blown up here."

"The Good Wife" spinoff's title sequences are the rarest kind of introduction, ones that compel viewers to watch attentively. CBS All Access doesn't have a skip credits option, but if it did, I'd never use it; the credits are too damn pretty.

Besides, they also illustrate the feelings driving the action. Exploding china, wine bottles, a vase of orchids, and a few Birkin briefcases speaks to the end of luxuries material and spiritual from days gone by. Blowing up legal reference books may be a bit on the nose, similar to the exploding TV screens featuring Donald Trump and his Attorney General and lackey William Barr. But the doomed couch and conference table join the category of those executed phones. Clear, honest communication is a relic of a different time. Only now, we cannot retreat into the tufted comfort of our furnishings (bang!). Coming to the table to negotiate with the other side isn't an option either (boom!).

Were the viewer under any delusions to the contrary this week's episode, "The Gang Goes to War," takes a sledgehammer to to all that. The main storyline teams Reddick, Boseman and Lockhart's named partner Liz Reddick-Lawrence (Audra McDonald) with Caleb Garlin (Hugh Dancy), an associate from STR Laurie, the multi-national firm that now own Reddick, Boseman and Lockhart. Their mission is to defend a war buddy of Caleb's in military court, DeMarcus Laney.

"The Good Fight" writers, led by co-creators and showrunners Robert and Michelle King, use real-world cases, legal and cultural, to inspire those depicted in the series. This episode's legal situation is only a few shades away from qualifying as a re-enactment of the scandal surrounding former Navy SEAL Eddie Gallagher.

In the show's fictional take on that case, Caleb and Liz take up Laney's defense after the soldier testifies at the trial of one Sgt. Meyers. Laney served under Meyers, and tells the panel that he and other soldiers witnessed Meyer murder civilians, including an elderly woman and a child, taking a tooth from each of his victims as trophies.

In the course of his testimony Laney says that he reported his commander's dishonorable, criminal behavior up the chain of command per military rules, but his complaints went unheard. To prevent Meyers from murdering additional non-combatants, Laney tells the court he tampered with his sniper rifle so the sergeant couldn't shoot straight. Unfortunately for Laney that action also violates military law.

But one man is treated differently from the other: Trump tweets a full pardon for the sergeant, much in the way that the real Trump's interference with the Gallagher case undermined that military court's authority. Within the show, however, while Trump's move denies justice to Meyers' victims, it also compels the sergeant to speak truthfully on the stand in Laney's case, and his odious testimonial leads to Laney's acquittal. Out of one brazen injustice comes a just verdict, fairly earned within the court's rules.

"It feels good to win for a change," Liz says at the end of the episode. Maybe this marks the start of an upward trend . . . but it won't be without casualties and additional defeat. Perhaps we should heed the lesson this episode offers.

"The Good Fight" runs on an inspired lunacy that probably wouldn't work in a world that wasn't functionally insane and dying inside an inequitable justice system. For the duration of the series, its writers have dramatized the steady crumbling of the justice system, remaining a few steps ahead of reality in the writers' room in order to meet its audience where we're slumped.

As ever, though, the Kings have once again shown themselves to be savvy enough predictors of where America would be with regard to our system of justice in the springtime of 2020 to seem prescient. Taking on the Gallagher case would be a natural for the show under normal circumstances. In the here and now, its example provides the writers an opportunity to demonstrate how one American system of laws that hasn't been entirely corrupted by politics – yet – can still be navigated to produce a somewhat just outcome for a person acting in the interest of morality.

This is a departure from the main arc involving Diane Lockhart, one that collides with that of her former partner and newly seated federal judge Julius Cain (Michael Boatman), who enters his new office with the intent of upholding justice, only to be threatened and, for a time, neutered by a bewildering instrument only known as Memo 618, a directive nobody can define but that somehow has the power to ruin a judge's reputation and career.

Diane, played by Christine Baranski, finds out about the memo when she takes on a pro-bono case involve fight against a faceless corporation. Said corporation's very wealthy owner insults the court and her client, then debases Julius himself after the judge has the man jailed for contempt, which he is well within his rights to do. Julius issues an injunction, but the man ignores it, demolishing the woman's place of business anyway.

And there's nothing anyone can do, since all records of the ruling and the case itself magically disappear.

The writers already spun golden material from Trump's populating the federal courts with partisan, unqualified judges long before that spiky virus tore into our economy and the fabric of civilization itself, leading to rulings like the one handed down by the conservative-controlled Wisconsin Supreme Court striking down the state's stay-at-home order. Wisconsin has reported at least 434 deaths related to COVID-19 as of Thursday, but its rate of reported cases is still ticking upward. And if other statistics hold, it won't be the wealthy who bear the brunt of this decision's impact going forward.

Diane spells out what this means, succinctly, in a previous episode. "I'm sure you agree that we should all be subject to the same system of justice," she days. "But we're not. If I'm given a subpoena, I have to comply. I have to answer honestly, and if I don't, I should be prosecuted. That is the only way that the system works. And if it doesn't work that way, then the country breaks down. It's over. We're done."

And this brings up to where Diane's quest to dig into Memo 618 stands, which is at a standstill. She's thwarted first by a colleague working within STR Laurie, and then by a nameless man who pays her husband a visit and threatens his government position and good standing with Trump administration.

The same forces already swatted Diane in her home. She doesn't know if she's up for another pounding.

The back half of this season of "The Good Fight" may be delayed, but this script and others that came before it were written long before our messy present state of affairs. It has always operated on the knowledge that our system of laws is only upheld by our faith in them and the unspoken contract that men and women must follow them, and the rulings of our courts. We trusted in those invisible supports completely because we trusted in the inherent decency of other people and in our faith that Americans stand for the greater good in the face of an existential threat.

But as another judge complying with Memo 618 tells Julius before he bows low before powerful masters he cannot see but whose will is demonstrably enough to crush him, the enforcement of our system of laws is mere shadow play. Judges, she says, are there to promote the illusion of fairness.

This might not mark the lowest point for "The Good Fight" protagonists, but it's pretty far down.

The same nameless man who visits Diane drops in to see Julius, congratulates him for rendering decisions that benefit important donors and dangles judgeships in higher courts if Julius continues to do his unseen masters' bidding. Julius immediately rebels, consequences be damned, and the fight within Diane is sparked anew.

The Kings could have ordered production to keep the series' credits as is, but those temporary cards needed to be inserted to remind us of the interruption that's slowed down the world, and the fact that these battles continue. Life and government ineptitude may have sidelined us to our couches and booted us from our offices.  Rest assured that we may yet see that couch and conference table explode because it was announced on Thursday that the series has been officially picked up for a fifth season.

Before that arrives, there will be more losses in this story and in our own nightmarish reality. But in times like these, it's usually art that delivers the encouragement we need to go on.  A previous episode of  "The Good Fight"  features a theatrical satire that bases its characters on the lawyers at Reddick, Boseman and Lockhart, including one patterned on Julius that rouses his sense of moral rectitude.

That's probably because Julius' actor stand-in also gets to say the defining line of this season, which also doubles as a warning. "What is injustice?" Julius' doppelganger asks, then answers his own question, "It's people giving up."

"The Good Fight" is currently streaming on CBS All Access. New episode debut on Thursdays.