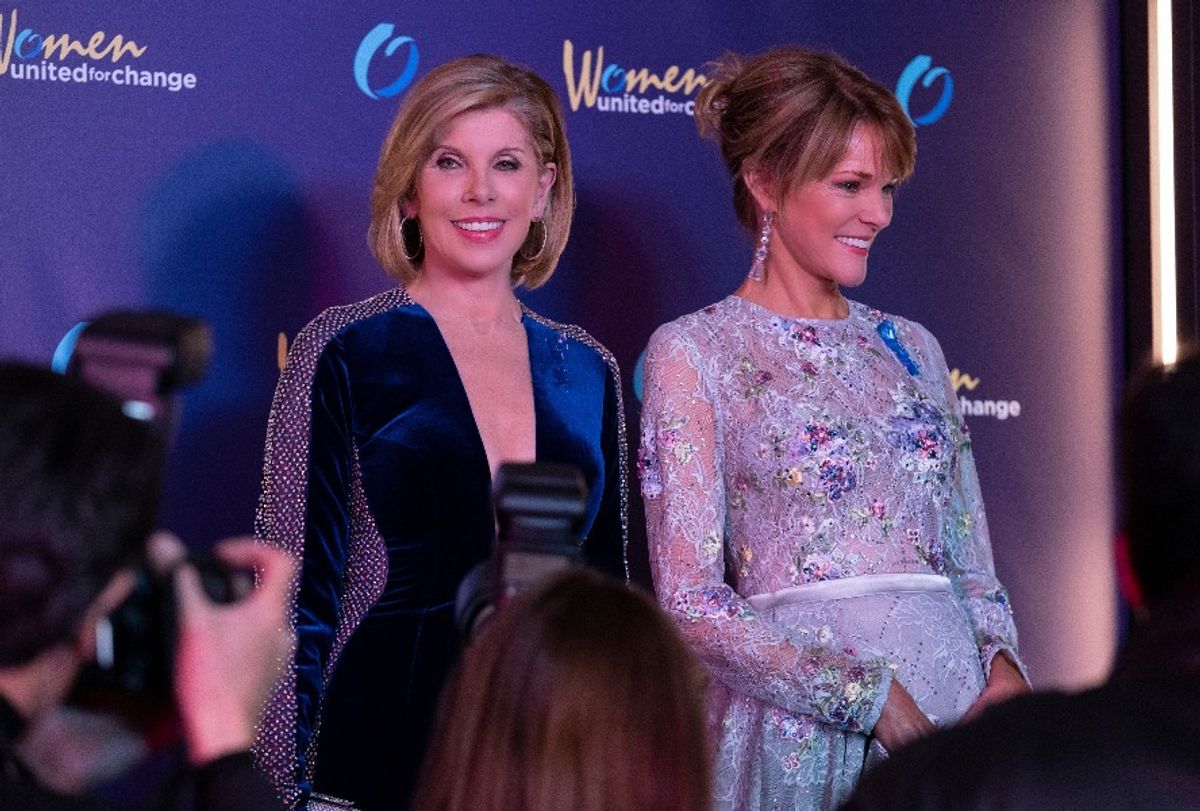 Spoiler alert: This article contains a few light details about the fourth season premiere of "The Good Fight" on CBS All Access. Oh, you can read it and still be delighted by what happens. But if you're a purist, stop reading now.

The fourth season of "The Good Fight" launches with a killer combo of wish-fulfillment and warning, dropping us back at the opening moment of the entire series in 2017. Diane Lockhart (Christine Baranski) sits her couch to witness the inauguration take place, only this time the reigning emotion isn't horror and disbelief, but elation. The reason? Because Hillary Clinton won the 2016 election.

Diane whoops in celebration and pops the champagne, and the viewer can't help but laugh – especially people who recall a famous line Madonna uttered long ago in another show's season premiere, one that was inspired by one of the dumbest, least forgettable soap opera twists ever imagined.

"What if this is all a dream? A horrible, horrible dream?"

"The Good Fight" showrunners Robert and Michelle King have spent three seasons on CBS All Access comfortably and cheekily rebuking Donald Trump's destruction of Democratic norms and the justice system. Ostensibly their show is a legal drama following the professional cases and personal affairs of the partners and associates at the predominantly African American legal firm of Reddick, Boseman & Lockhart.

Since its beginning, though, "The Good Fight" has placed depicting the lopsided nature of justice in first chair position. As this presidency's corruption has deepened, its episodic themes and seasonal arcs have also evolved to portray the steady dissolution of the presumed bulwark against injustice that is supposed to be provided by the law.

"The Good Fight" has been very good, in fact, at demonstrating the differences between one concept and the other, and showing us by way of episodic parables that one cannot be achieved if we do not uphold the sanctity of the other.

Our recent impeachment hearings and Trump's brazenly corrupt acquittal in the Senate showed the world that our system of laws can only be as strong as our willingness to enforce them. Without such enforcement, our courtrooms might as well be life-sized dioramas made of papier-mâché populated by puppet judges.

In light of that recent constitutional crisis, and observing the series from the midst of the global pandemic in which we find ourselves, this season premiere is a relief even if the dreamland it presents isn't entirely utopian.

Out of all the presidents that have come and gone in recent history, Trump has managed to live rent-free in nearly every American's head since the moment he was sworn into office. As much as we try to escape that, his policies and their effects make unplugging completely impossible. Millions of people are quite literally locked down in their homes in large part due to his mismanagement of government resources and power.

So it's easy to understand why, even in a time that binge-viewing has become a survival tool, watching a TV series fueled by outrage at the outrageous behavior of this dumb, cruel leader would not be atop anyone list. What this doesn't take into account is the essential catharsis "The Good Fight" offers, the fact that it isn't merely a lesson but it's also a pressure release.

And it's only grown more enthusiastic in its embrace of the sheer insanity in which we're living. In the third season Diane joins an underground resistance group determined to turn the dirty tactics the right has employed against them.

She witnesses associate Lucca Quinn (Cush Jumbo) get doxxed for dealing with a Karen who calls the cops on her when the white woman assumes Lucca is her own biracial child's nanny and decides to save her from perceived mistreatment. And Diane and the firm contend with the unpredictable outbursts of drug-addled chaos agent of the right operating in their midst, Michael Sheen's lunatic lawyer Roland Blum. The season doesn't end in tears, but with a SWAT team kicking in the door at Diane's home. The show is only as insane as the world it is depicting – and we are living in a mad, mad, mad, mad world.

The fourth season opener announces its punchline in the title, "The Gang Deals with Alternate Reality." Except it isn't the gang per se; only Diane leaps into this separate timeline, where the United States government is responsibly playing its modern role as global custodian, led by Clinton's steady hand.

Sure, Clinton political opponents are still squawking about her emails, but look: the rainforests have been saved! The polar bear population is recovering! A cure for cancer is nigh! Nobody knows who Brett Kavanaugh is!

Nevertheless, the name of the show is "The Good Fight." Even a universe with Hillary Clinton in the White House still isn't flawless, and as Diane comes to realize, without major setbacks a few necessary and long overdue advances never occur.

Diane's delight in Kavanaugh's erasure from history also means that #MeToo has never happened. Hence, when Diane lists the names of famous men dethroned from their seats of power to her partners Adrian Boseman (Delroy Lindo) and Liz Reddick-Lawrence (Audra McDonald), firm investigator Marissa Gold (Sarah Steele), nobody knows what she's talking about. Matt Lauer remains the beloved host of "Today." Charlie Rose is still ensconced at his famous round table.

All this is merely additional sprinkles on Diane's nightmare sundae. The cherry is the news that this avowed feminist has brought the firm one of the nation's most prestigious clients – and if you know the show's brand of sick humor, you can probably guess who that is. 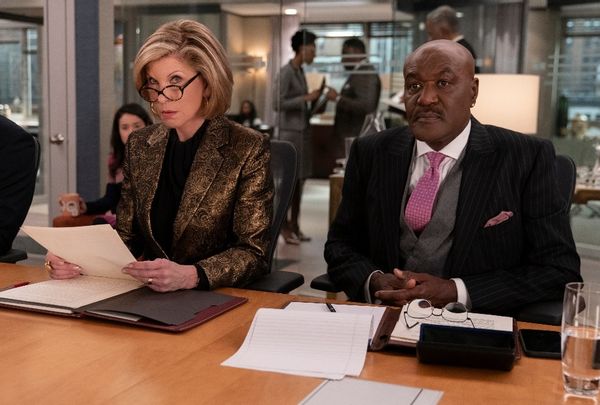 The premiere is a one-off hour of twisted respite from the reality where the third season dropped us. And once the latest ongoing plot gets going, you may appreciate the short vacation from reality. This is not to say the season's latest developments aren't their own version of surreal; they are. They're also quite reasonably within the realm of what could happen and what is happening.

The Kings excel at depicting the natural evolution of the justice system's dismantling, the reality of which has played out in headlines and the TV news cycle. In "The Good Fight," the war is over and the good guys have lost. They just don't know how extensive those losses are – not yet.

That "good guy" mantle, by the way, doesn't only refer to Diane's law firm. It's the system itself, a fact to which newly seated federal judge Julius Cain (Michael Boatman) is rudely awakened straightaway.

In this new season, the writers portray the terrible consequences of what happens when the rich demonstrably circumvent justice as it is defined by the Constitution, which boils down to two systems: the one where everyone but the wealthiest of us is forced to abide by the law and duke it out in courtrooms, and the one percenters who can flout the law and treat judges and courtroom with the same deference as they would a gnat.

This is already our reality, of course. "The Good Fight" simply kicks it up another notch by creating a conspiracy Diane stumbles upon in the form of a mysterious directive: Memo 618.  Nobody who knows what it is or will explain it. But we see its effects in action, as all-powerful men brazenly run roughshod over courtrooms, proving that oligarchical corruption is officially codified into the judiciary.

The partners at Reddick, Boseman & Lockhart begin to get a clue that this is the case once its new owners, the multi-national legal firm STR Laurie, begin reaching into corners of its day-to-day business that they previously agreed to steer clear of.  John Larroquette is tremendous as STR's chilly and enigmatic partner Gavin Firth, who holds court on the floor above them and opens meetings by spewing inscrutable fables about masters and initiates.

Larroquette is a concise counterbalance to Sheen's fire-and-fury Season 3 character, in that he's as readable as a wall of ice. His actions speak as honestly about his intentions as Blum's explosions do in the previous season, the most obvious example being Firth allowing his pack of dogs to run wild in the hallways of Reddick, Boseman & Lockhart, defecating wherever they please.

We may ask ourselves how this is better than the alternate reality where the world sails on under a steadier hand. It isn't, obviously. (The design changes Firth's firm imposes on Reddick, Boseman & Lockhart's space in themselves feel invasive and threatening.) Rather, the point seems to be that no true justice can be achieved until the general populace can be made to understand all the ways that power is aligned to screw all of us.

In the second season Adrian and Liz had a definitive conversation about the difference between justice and the law. The law is a constant, they said back then – or rather, it should be. Justice is the moving target. And as Liz told Adrian, justice does not define the law. Conscience does.

What we've relied upon instead is faith that our laws will keep the worst legislation and fallout from executive orders in check. When all else fails, the only constant that we have is the law.

The aggravating lunacy of this reality is the widespread acceptance that the ability to earn and wield large sums of wealth and power gives a person the right to treat the concept of a conscience as optional. "The Good Fight" doesn't play out this concept like some dry polemic, but as a combination of a conspiracy thriller, an absurdist comedy and a kooky mystery in which its wealthy, privileged heroine sees how the game is rigged against the little guy and throws in her lot with them.

Diane swings hard, and she loses badly. She fights as dirty as the enemy does and ends up slammed on the floor of her own bedroom, guns in her face. She wakes up from a dreamed timeline that isn't the idyll she imagined in her waking hours. When asked who the President is, she breaks out in peals of maniacal laughter.

Diane, Adrian, Liz, Lucca and the rest know that survival, let alone winning, means being willing to get a little crazy in a world run by vicious, greedy sociopaths. And they also know on some level that their battle may be a quixotic undertaking. It's worth taking on nevertheless. And it still makes for a worthwhile, satisfying escape into a world that may not necessarily be better, but a place where the fight isn't gone from us.

The fourth season of "The Good Fight" is currently streaming on CBS All Access. New episodes debut on Thursdays.