Hulu's new period piece from Tony McNamara is an absolute delight and in our anti-intellectual age, a comfort 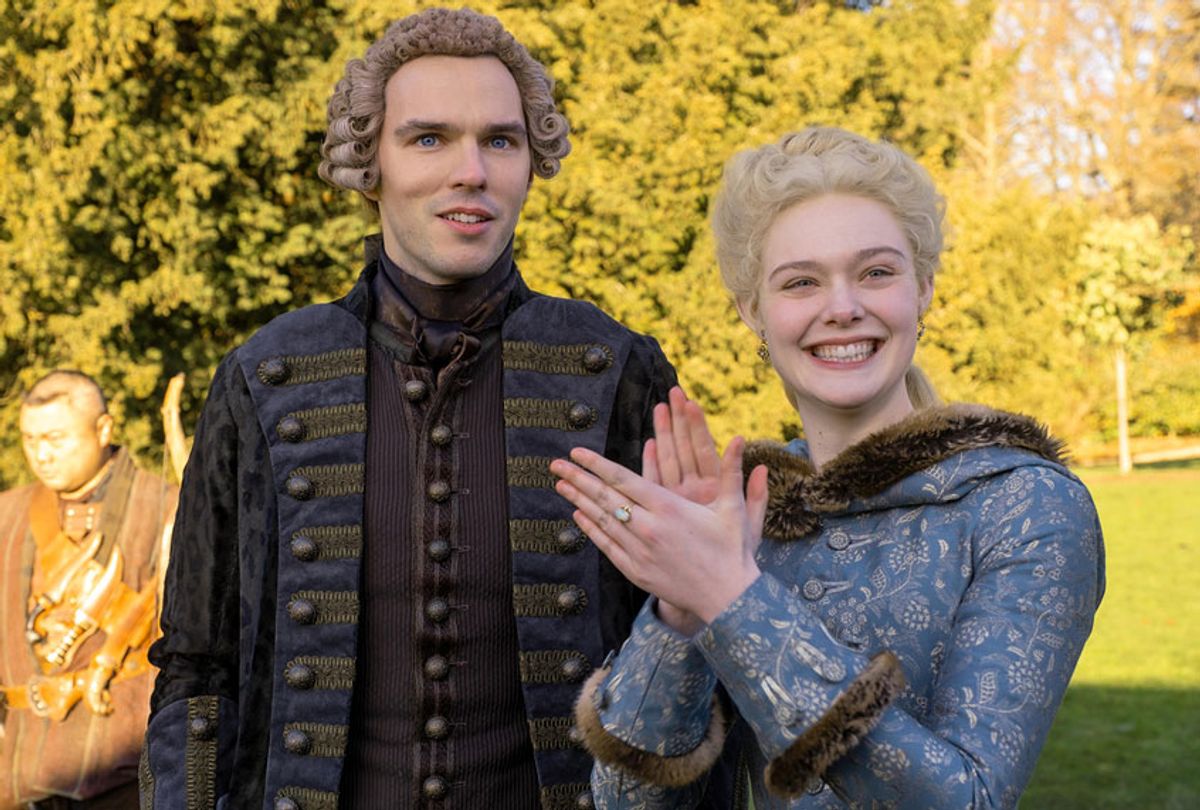 Surely as Catherine the Great is the among Russian history's most celebrated figures, Elle Fanning burns brightly in headlining "The Great." Her performance is everything a viewer wants from an empress in ascent: confident, sharp, funny and luminous. Even people who typically shy away from period pieces will be drawn to what she does within the series' 10 episodes .

The scene stealer, let it be known, is Nicholas Hoult's Emperor Peter III.

Peter is the scion of a better-loved ruler, Peter the Great. And the old man's reputation stings the younger's ego. Beyond sharing the name, departed grandfather and his grandson have little in common. Peter the Great was a renowned military strategist who expanded his empire and brought enlightenment era reforms to his people.

Series creator Tony McNamara, who co-wrote 2018's Oscar-nominated film "The Favourite," depicts Peter as an inept terror, a selfish and cruel dolt who cares only for his own glorification and screwing anything that moves. He wages war, but doesn't know why he's sending his men off to die; he doesn't listen to his own officers, instead insisting they follow his dumb plans.

Entranced by his assurance of his own awesomeness, Peter treats his kingdom as if its his own personal playground and regards everyone who isn't him as toys or servants. "The nobility love me because I've turned the palace into a big party and delicious buffet," he declares to Catherine in one scene, "and women love me because of my massive c**k!"

Thankfully this story has a happy outcome for 18th century Russia and for Fanning's title character. Catherine the Great is remembered for being Russia's longest ruling female head-of-state – a fact – and for allegedly banging a horse, a rumor addressed in the fourth episode, "Moscow Mule." Under her leadership, Russia's cultural life flourished, its governance served the people for once. She also expanded the country's territory.

All that she achieved exists in the shadow of the horse sex business, and the preposterousness of that lie and the series' explanation of its origins only further spices McNamara's approach to her history. By now it should go without saying that high schoolers should not use "The Great" as a source for their history class homework.

Amidst prolific instances of dramatic license McNamara takes are several downright goofy ones. One scene that depicts the imagined origin of the cocktail for which the episode mentioned above was named. It's an adorable and light moment, but obviously didn't happen. In another, Catherine answers he insult of the horse business by gamely grinning as she replies, "I wanted to. But the horse said no, and neigh means nay!"

Are you going to argue for accuracy in a show like this or surrender to a good time? The latter, probably.

Several recently debuted series set their fantasies in past eras bearing some resemblance to our fraught present as a means of commenting on our societal decline. And they do this with such earnestness as to bleed the enjoyment out of the viewing experience.

"The Great" aspires to no such parallels, at least overtly; there are a few exchanges in which Peter or one of his lackeys express a yearning to "make Russia great" that are clear allusions to a certain modern-day would-be king.  McNamara nevertheless succeeds in creating a vision of history that has much in common with the diseased chaos of the now. Strangely enough, this take is comforting.

Many countries have been ruled by boobs before ours, and while the population assuredly suffered, the strongest of those nations survived. Never mind that the country in question is currently ruled by a vicious strongman – the point being is that there were better days, and let's not forget, Chernobyl. History moves in waves, and sometimes those waters are choppy.

From the outset, "The Great" lets us know that this is not a romantic comedy, but it may be a pragmatic one regarding the nature of love, and more realistically, pleasure. When Catherine first arrives in Russia from Germany, she envisions her marriage to Peter will be a romantic affair until she actually meets him. She swoons at the thought of her wedding night, but understands soon enough why her lady-in-waiting Marial (Phoebe Fox) is not squealing alongside her as she envisions how her first evening of nuptial bliss will unfold.

But Catherine, unlike her new husband, is no simpleton. She absorbs the work of French philosophers and aches to share their fresh ideas with her new subjects. But she is horrified to discover that the aristocratic ladies surrounding her are vacuous illiterates who only wish to gawk at fashion, roll balls on the lawn, and maybe go a round or two with Catherine's dim husband.

Surrounded by misogynists and gossips, Catherine still finds allies in Marial, whom Fox renders with acerbic, unflappable attitude, and the rare intellectual in Peter's court, Count Orlo (Sacha Dhawan), a meek, bumbling virgin who soon has a meeting of the minds with his new Empress. Once brought together, the three land on the same page: the only way to save Russia is to overthrow Peter and install Catherine on the throne.

"The Great" presents the intrigues surrounding Catherine as a complex confection, a lush painting incorporating shadings of farce, comedy, tragedy, and drama. With the same hour the action skips from the preposterous glee of one scene into another where someone, Catherine included, endures horrific abuse. And yet, regardless of what history tells us, there's no question as to who is going to end up on top here.

McNamara's scripts soar with effervescent humor and cleverness that Fanning amplifies with a sense of dignified, wry nonchalance. Fox is a swift partner at her side as Marial, while Hoult, who also appears in "The Favourite," manages to make Peter enjoyable despite his misdeeds.

A lot of his portrayal's success rides on the wide-eyed, idiotic expression he wears in many scenes, and along with the concentrated dose of pomposity and excitement he lends to every petty act.

Loyalty is all that matters to Peter, and as long as they agree that he's the best at everything, the greatest they've ever seen, there is joy in the king's court and a cheerful spring in Hoult's carriage. The only time a flicker of sadness flashes across his face is when he keens for his mother, a woman he misses so much that he keeps her body nearby in a glass case, forever his mummy. No joke, but also, joke!

Ornate sets, beautiful lighting and impressive cinematography make "The Great" easy to take in, but its raucous energy, and the message at its center, certify it as a sweet binge that nourishes nevertheless. And in the way of the best series, it reveals to us what TV's been missing all this time: a fantasy about the rise of enlightenment, presents as we accelerate into anti-enlightenment.

History indicates that the reign of Peter III was short, and while "The Great" may choose to drawn out Hoult's giddy presences for longer than what the records show, we won't mind.  True greatness lurks nearby, waiting for her moment to seize the reins. Watching her strategize is entertaining, and cheering, letting us know that we might actually make it through this after all.

All 10 episodes of "The Great" are currently streaming on Hulu.