As millions lose insurance, states cut Medicaid in response to the coronavirus crisis 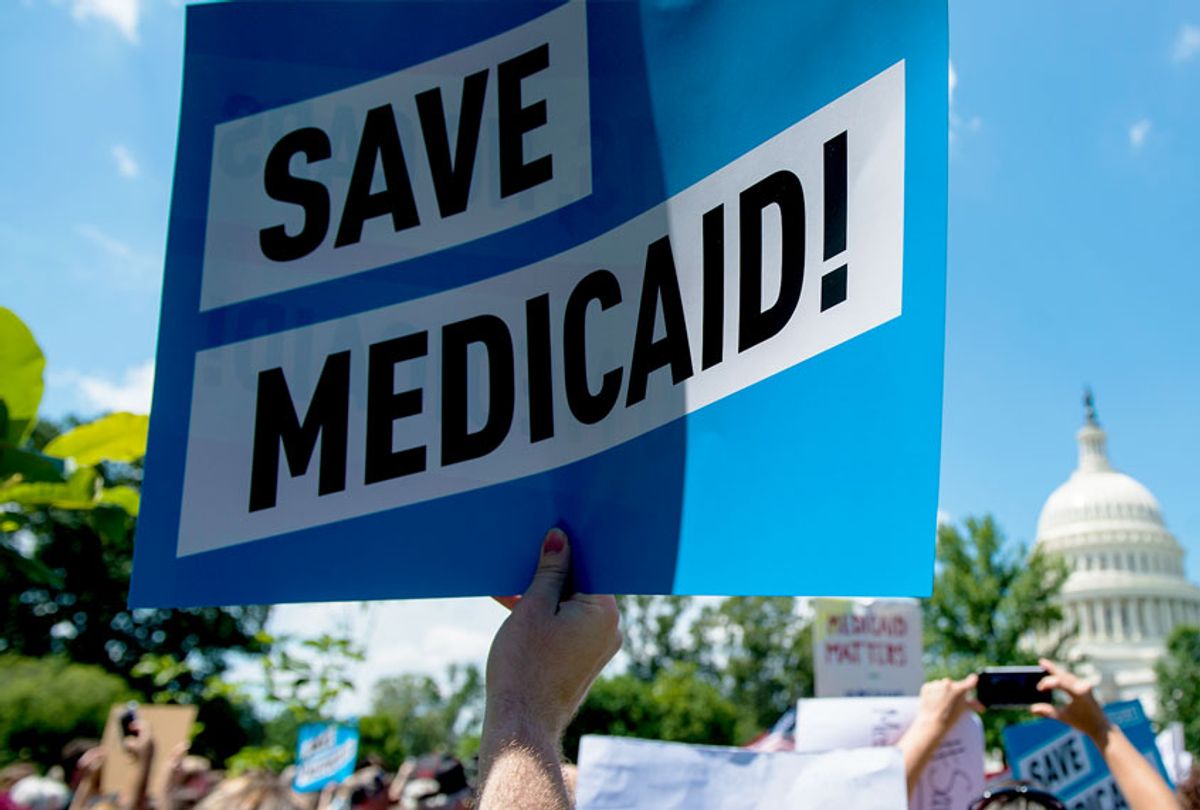 States are announcing deep Medicaid cuts due to budget shortfalls stemming from the coronavirus pandemic, at the same time that millions of people lose their employer-based health coverage.

During the Great Recession, state Medicaid programs slashed coverage for services like dentistry, podiatry, and insulin pumps amid steep budget cutbacks. The current crisis "is going to be the '09 recession on steroids," Matt Salo, the executive director of the National Association of Medicaid Directors, told Politico. "It's going to hit hard, and it's going to hit fast."

Medicaid, which is one of the largest programs funded by states, covers about 70 million low-income adults and children — the same population that has been hit hardest by the coronavirus. Though the federal government pays more than half of the Medicaid cost, governors ultimately determine the scope of the program in each state.

Several states have already announced cuts to their Medicaid programs and others are expected to follow. Ohio Gov. Mike DeWine, a Republican, last week announced a $210 million cut to Medicaid over the next two months as the state adds more than 100,000 new Medicaid enrollments per month. Colorado Gov. Jared Polis, a Democrat, announced a $183 million cut to the state's Medicaid program through June earlier this month as a key legislative committee estimated that 500,000 more people could enroll in the program this year. Georgia Gov. Brian Kemp, a Republican, ordered agencies to prepare for 14% cuts across the board as the state's Medicaid enrollment is projected to spike by more than 560,000. Numerous other states are planning steep cuts as statewide lockdowns bleed budgets of much-needed tax revenue.

The cuts could not come at a worse time. Roughly 27 million people could lose their employer-based health coverage amid the pandemic due to job losses, according to an analysis by the health care nonprofit Kaiser Family Foundation. More than 36 million people have already filed for unemployment since the outbreak began.

"The cruel nature of the economic downturn is that at a time when you need a social safety net is also the time when government revenues shrink," DeWine said during his announcement this month.

The cuts come as a study by researchers at Carnegie Mellon University's Heinz College of Information Systems and Public Policy and the University of Montreal highlighted the importance of increased access to Medicaid during a pandemic in a working paper published by the National Bureau of Economic Research. The researchers compared infant mortality rates in the pre-Medicaid flu pandemic in 1957-58 and the 1968-69 flu pandemic, which hit the United States shortly after Medicaid was implemented. Not only did the introduction of Medicaid help save more children, but it also helped contain the disease spread among everyone else.

"After Medicaid implementation, we find that better access to insurance in high-eligibility states substantially reduced infant mortality during the 1968-69 pandemic," the study said. "The reductions in pandemic infant mortality are too large to be attributable solely to new Medicaid recipients, suggesting that the expansion in health insurance coverage mitigated disease transmission among the broader population."

"Our results suggest that improved access to medical care through expansions in public insurance may play an important role in reducing mortality during health crises like pandemics," said Edson Severnini, a professor of economics and public policy at Heinz College. "However, because these episodes arrive infrequently, the benefits may not be captured by policy evaluations focused on the immediate aftermath of implementation."

Karen Clay, professor of economics and public policy at Carnegie Mellon University's Heinz College and the lead author of the study, told Salon that the cuts would impact Americans that are not on Medicaid as well.

"Cuts in Medicaid reimbursement that reduce access may have adverse effects on both Medicaid and non-Medicaid populations. Access may fall as fewer doctors accept Medicaid or financially stressed hospitals close," Clay said. "The issue may be particularly severe when the coronavirus and flu seasons overlap."

Governors have pleaded for the federal government to provide at least $500 billion in funding to help states deal with their budget shortfalls. House Democrats introduced a bill this week that would provide nearly $1 trillion to state, local, and tribal governments. But Senate Majority Leader Mitch McConnell, R-Ky., has pushed back on what he labeled "blue state bailouts" and said states should go bankrupt instead, even though states are legally barred from doing so. President Donald Trump reportedly plans to use the funds to pressure states into reopening and cave to his anti-sanctuary city agenda.

Congress previously approved a temporary 6% increase to the federal portion of Medicaid funding. However, the National Governors Association, led by Maryland Republican Gov. Larry Hogan and New York Democratic Gov. Andrew Cuomo, called on Congress to double that increase as it did following the Great Recession. Without this help, Sen. Cory Gardner, R-Colo., and Sen. Michael Bennet, D-Colo., said, the state would be forced to make "harmful budget cuts to state programs like Medicaid."

The warnings come as up to 23 million people are expected to sign up for Medicaid in the coming months. In Arizona, more than 78,000 people have already enrolled in Medicaid and the Children's Health Insurance Program over the last two months, according to Politico. Virginia has seen a 20% spike in enrollment applications. New Mexico, where more than 40% of residents already have Medicaid coverage, new applications surged by more than 10,000 in the first two weeks of April.

But millions more people are ineligible for their state's Medicaid program. Only about 79% of people expected to lose their employer-based insurance will be eligible for government-subsidized coverage through Medicaid or the Obamacare marketplaces, according to the Kaiser Family Foundation. Nearly 6 million people expected to lose their employer-based plans either do not qualify for Obamacare subsidies or live in a state that did not expand Medicaid.

The bill introduced by House Democrats this week includes subsidies to cover the full cost of COBRA, which allows laid-off employees to stay on their existing health plan. But Republicans balked at the plan, demanding that Democrats add a provision that would block the funds from being used to cover abortions, stalling the effort.

Dr. Donald Berwick, the former administrator for the Centers for Medicare and Medicaid under President Obama, and Tom Scully, who held the same position under President George W. Bush, called for Congress to go even further. The pair wrote a joint op-ed urging lawmakers to cover the full cost of expanding Medicaid in the 14 states that refused to expand their programs under Obamacare.

"This would encourage 'non-expansion' states to expand eligibility, at least temporarily, for Medicaid to cover currently uninsured people during the pandemic," they wrote.

A study by the Urban Institute estimated that about 40% of people who lose their jobs in the 14 states that still refuse to expand Medicaid will be left with no coverage at all.

Benjamin Sommers, a professor of health policy and economics at the Harvard T.H. Chan School of Public Health, and Jonathan Gruber, an economist at the Massachusetts Institute of Technology, argued in a New England Journal of Medicine piece that the "the case for Medicaid expansion in the remaining 14 states has never been stronger."

"Given these realities — and the fact that existing Medicaid expansions have not produced the dire effects on state budgets that critics predicted — there is no moment in recent memory more critical than now to bolster Medicaid," they wrote. "Covering more people in Medicaid is a rapid way to bring needed resources into the health care system and infuse federal dollars into state economies on the verge of a major downturn. Medicaid expansion also requires no new infrastructure or federal oversight to achieve, unlike many other types of stimulus spending. Medicaid remains highly popular with voters from both parties. And most important, expanding Medicaid can save lives."