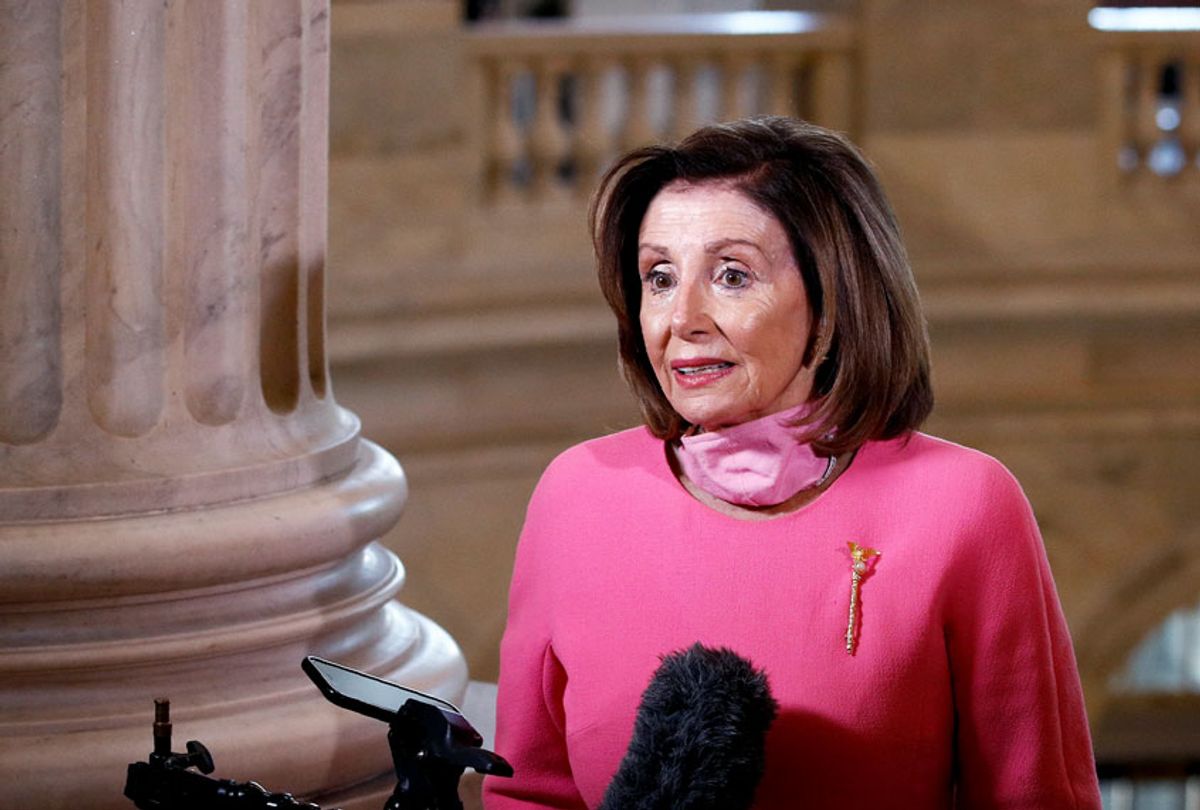 House Speaker Nancy Pelosi of Calif., speaks during an interview with The Associated Press on Capitol Hill in Washington, Wednesday, May 13, 2020. (AP Photo/Patrick Semansky)
--

House Democrats unveiled a $3 trillion relief bill on Tuesday, one that would aim to provide additional direct cash payments to ordinary Americans and assist states that are struggling to cope with the public health and economic crisis.

The legislation — dubbed the "Health and Economic Recovery Omnibus Emergency Solutions Act," or Heroes Act — will include nearly $1 trillion for struggling state, local and tribal governments, according to The New York Times. It will also provide a $25 billion bailout for the Postal Service, invest $3.6 billion in election security and send another round of $1,200 direct payments to American families. In addition, it would roll back a tax cut for the wealthy included in the original stimulus legislation, one that allowed couples making at least $500 million to negate taxes on stock market gains by citing their business losses.

House Speaker Nancy Pelosi claims that the original draft of the relief legislation cost $4 trillion but was reduced when the framers decided to narrow its scope. The measure is being criticized both by Republicans, who feel that it is too expense, and by progressive Democrats who feel that it does not do enough.

"In no circumstance are we ready to vote on this on Friday," Rep. Pramila Jayapal, D-Wash. and co-chairwoman of the Congressional Progressive Caucus, told The New York Times on Tuesday. "We need a full caucus conversation, an open dialogue, and we need to figure out how to address the crisis with a solution that matches its scale."

Senate Majority Leader Mitch McConnell, R-Ky., described the Democrats' proposal as "not something designed to deal with reality, but designed to deal with aspirations." He added that "we're going to insist on doing narrowly targeted legislation." McConnell said that he and Sen. John Cornyn, R-Texas, want to provide liability shields for businesses to protect them from virus-related malpractice lawsuits and to similarly protect corporations, government agencies and nonprofit groups that have chosen to remain open during the epidemic.

Pelosi's bill does not entirely achieve what it ostensibly sets out to do. As Salon's Sophia Tesfaye points out, the repeal of parts of the 2017 tax cut bill would still lower federal taxes for high earners. It also neglects to address the problems with the Paycheck Protection Program, which was supposed to help small businesses but has been exploited by large corporations while increasing the burdens on smaller companies. More than 60 Democrats in Congress urged Pelosi to cover payrolls, 100% up to $100,000 per employee, in reforms for PPP. These recommendations were not followed in the new bill draft.

The bill does, however, include $100 billion for rental relief, $75 billion for mortgage relief and increased funding for unemployment insurance, hazard pay and nutrition assistance. It would also provide $10,000 in across-the-board student loan forgiveness for federal borrowers.

It is unlikely that all of these provisions will maintain their current form after the legislation goes through the hands of congressional Republicans. Its scope, however, reveals how Democratic leaders are planning on responding to the ongoing economic crisis in the foreseeable future.

The first major stimulus bill, which was passed in March, provided cash payments of $1,200 to taxpayers who incomes equaled or fell below the mark of $75,000 per year. It gradually phased out payments for taxpayers whose incomes were between $75,000 and $99,000 per year before eventually eliminating them entirely for higher earners. Eligible families also received an additional $500 for every child in their household. The bill also provided $500 billion in relief for companies that were particularly hurt by the pandemic including airlines, hotels and cruise companies; $350 billion in relief for small businesses; and $100 billion in assistance to hospitals. The legislation also extended unemployment benefits by 13 weeks and expanded eligibility criteria to freelancers and furloughed employees.