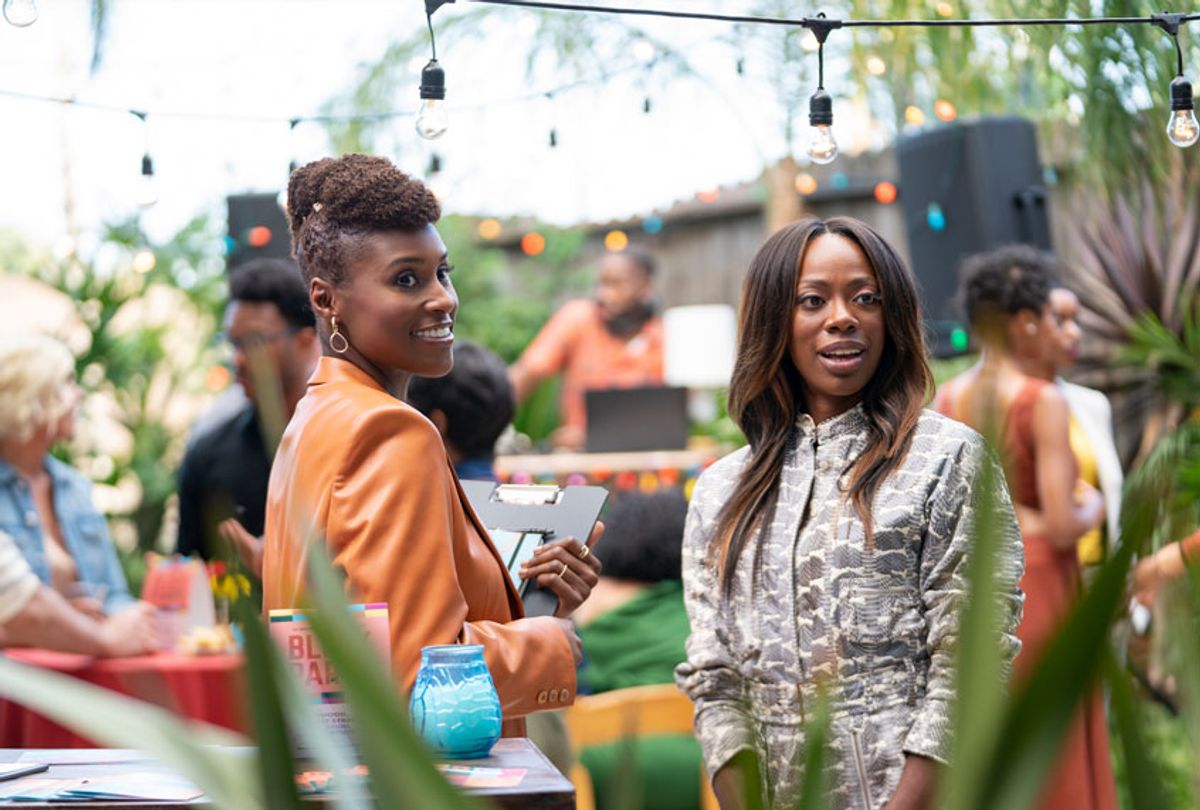 We take it for granted that most TV best friends stay together. Lucy never left Ethel, right? Mary Richards always stuck by Rhoda. Edina and Patsy had their spats but always found their way back. Issa and Molly, our girls at the heart of HBO's "Insecure," seemed to fit this pattern.

Did they though? Look back at the very first episode of the series, in which Issa Dee, played by series creator Issa Rae, leans on her best friend Molly (Yvonne Orji) to support her but doesn't reciprocate in kind. The highlight of that pilot is Issa's off-the-cuff freestyle rap at an open mic, where she brings the house down with a recurring refrain of "Broken Pussy."

Molly might have bounced to that banger, if it hadn't been inspired by her. Only a few moments before Issa takes the stage, a distraught Molly admits to Issa that she fears her unluckiness with men might be because something's wrong with her. Later, Issa assures Molly that the song didn't mean anything. They make up.

This has been what Issa and Molly do: both lean on each other, and then one leans harder as the other pulls back. One stumbles, and the other picks her up.

So in a recent episode when Molly tells Issa, "You know your life don't have to be this messy, right? Sometimes I think you like that s**t," before softening the blow with, "I'm just trying to help you be real with yourself and hold you accountable," it should be fine.

And when Issa, weighing in on Molly's budding relationship with a new guy says, "It's seems like you always finding a problem. Sometimes I'm like, do you want to be happy? I'm sorry, it's just . . . aren't you tired? Because I'm tired for you" – that's just a friend being a friend.

Or it would be, if the season hadn't kicked off with where all of this leads – this being those digs and all the others that came before them in seasons past. We see Issa collapsed on her couch, talking on her phone while half-watching a true crime show about LaToya, a missing black woman last seen walking into a Red Lobster.

"Honestly," she says to the unidentified person on the line with her, "I don't f**k with Molly anymore."

On cue, the reporter on Issa's TV asks, "What happened? Who's responsible? Did anyone see this coming? Could anyone have stopped it?" She's talking about LaToya's vanishing. She's also setting up the long flashback that follows, spanning the five episodes.

We take the people who mean the most to us for granted. Even if we don't mean to, it happens, we're only human. This may be the central lesson of the fourth season of "Insecure," ostensibly a comedy about Issa and Molly's adventures navigating their professional lives and loves in Los Angeles, first in their late 20s and now in their 30s.

Rae's series was never expressly about Issa and Molly. Storylines have explored everything from the challenge of being in a "throuple" to the psychological tribulations of being a person of color in a mostly white workplace, whether by way of Molly's law firm, or Issa's white liberal nightmare of a social work gig.

This new wrinkle, though, highlights how sharply the series digs into power dynamics. Humor leads the show, of course, and between the music and the intimate directing that captures a specific feeling in each episode as concisely as it tells the story, ignoring the consistent power imbalance between these two is easy enough.

In opening seasons, Issa is in a long-term relationship with her unemployed boyfriend Lawrence (Jay Ellis) and stuck in a dead-end job while the distressingly single and thirsty Molly excels in her career. Issa loses the boyfriend, leaves the job, and meanders between possibilities while Molly continues to excel professionally and stall out in her romantic life.

Frontloading Season 4 with the breakup, which airs two years after the third season finale, delivers a surprise that doesn't simply come out of nowhere. And this, by the way, is an out of the ordinary move for a relationship-driven series, particularly one steered by a female friendship.

In these new episodes, Issa has a focus and a goal, to produce a block party with major sponsorships showcasing local artists in her quickly gentrifying South Central L.A. neighborhood. Molly has a new relationship that stutters as it starts, but soon turns out to be real and possibly lasting. But when Molly needs Issa, she's not always there for her. She's too busy with her event or, worse, hanging out with a shiny new friend who happens to be dating her ex.

Friend divorces aren't unheard of on TV; "GLOW" leapt out of the gate with one, "Girlfriends" examined the end of a friendship back in the day. Arguably one of the best seasons of "The Real Housewives of New York" was its third, in which viewers watched the writhing, agonizing death of the friendship between Jill Zarin and Bethenny Frankel. (Frankel left the show after that season, citing the situation as too toxic to continue.)

In each of those cases, the bust-up and the aftermath is where the story begins. "Insecure" springs the Molly-Issa split on us, but a re-watch would show us that it was creeping up on them all along, waiting for a vulnerable patch. And it comes when each of them assumes they know who the other one is when, in reality, they're ascribing outdated flaws to an evolved person.

"You're gonna pull an old Molly and scare his ass away," Issa casually says when Molly asks about whether to invite her new boyfriend to Thanksgiving, leading Molly to critique Issa's recent choices, accusing her of trading sex for weed and toiletries in her no-strings relationship with a TSA agent.

People are fickle when it comes to their favorite TV shows. We bristle at too much consistency while seeking out a certain level of reliability. If you have any doubts of that check out a few episodes of "NCIS" or "Law & Order: SVU," or any of the longest-running comedies. The secret of their longevity is in the fact that the core dynamics don't change very much. New characters might step in as old ones depart but they don't change the show's formula or cadence too drastically.

This is the secret to the success of "Insecure," too – but the change and evolution in Issa Dee's life is the constant, not any of her relationships, including her bond with her best friend. And this reminder is a revitalizing change-up for a series that was humming along quite well before this season's turn. It's painful to watch, but that pain keeps the show grounded and real.

In the wake of its airing, fans argued on social media as to which friend was more at fault, Molly or Issa. That matters less than what the writers show us from this point through to the season finale. This week's episode wasn't available for review in advance, but its preview teases Issa figuring out what to do with this new void in her life. The block party that dominated so much of her time is over, but so is her closest friendship. Going back to where they were would be convenient: hopefully  the series doesn't go that route.

"If you were a dress, I would keep you," Issa tells Molly in a line Rae delivers so blithely and sweetly that the sentiment can only be true, and reminds us that sometimes our favorite things wear out and stop fitting. Do we repair or replace? That's the question. Either way, the story gets a change-up, strengthening our devotion to this reliably brilliant series along the way.

New episodes of "Insecure" debut Sundays at 10 p.m. on HBO.