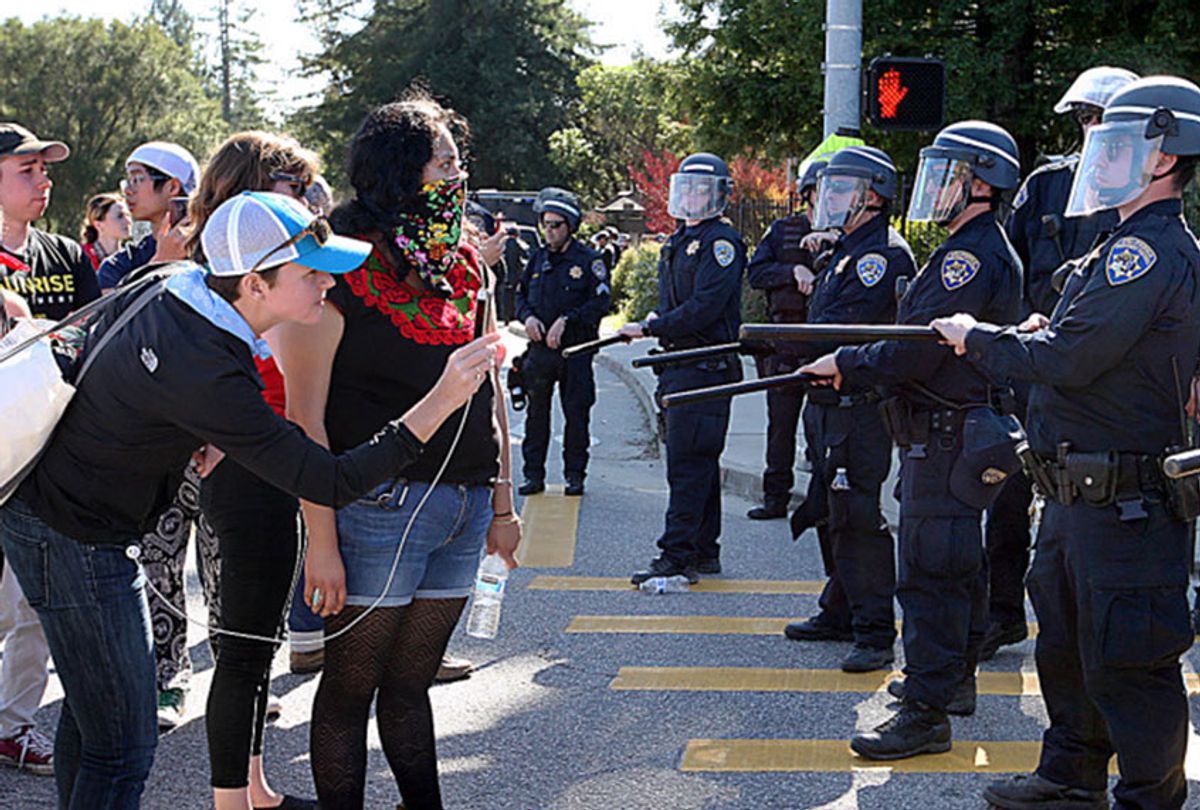 The University of California at Santa Cruz (UCSC) Police Department, with assistance from the Alameda County Sheriff's Office and the California National Guard, used military surveillance to suppress the UC Santa Cruz graduate student wildcat strike earlier this year, according to emails acquired through the California Public Records Act.

Vice first reported the content of the emails on May 15 which provided insight into the coordinated efforts between the UC Santa Cruz Police Department, Alameda County Sheriff's Office, and the California Governor's Office of Emergency Services, to police the protests. As Salon has previously reported, police and campus officials reacted to the nonviolent labor action with threats, arrests, firings, and violence from the police with batons, according to grad students at the strike, for months as grad students demanded a Cost-of-Living Adjustment (COLA) to help alleviate the rent burden of living in a pricey coastal California town.

The new emails, which have been reviewed by Salon, dive deeper into the efforts to police the protests that went beyond what the grad students observed on the picket line. They show the UC Santa Cruz Police Department requested mutual aid from the Alameda County Sheriff's Office to police the protests as early as December 31. Notably, UC Santa Cruz is located in Santa Cruz County, not Alameda County — which is about 40 miles north.

"It's disturbing to be part of a labor action like this and to see the militarized nature of the university's response," Will Parrish, a PhD student in UCSC's History of Consciousness program, told Salon in an interview. "I felt disturbed to see both the level of militarization and the casualness of their discussions in their email threads."

Specifically, the UCSC Police Department requested deputies, trucks and vans in the case of arrests. All expenses, including food and lodging, were paid for by UCSC police for at least 65 officers. At the time, grad students were on a wildcat strike, withholding final grades for the fall quarter until their demand for a Cost-of-Living Adjustment (COLA) was met. Withholding grades evolved into a full wildcat teaching strike in February, meaning they withheld teaching, grading, and office hours, as their demands continued to be dismissed.

According to emails dated February 11 and 13, the California National Guard provided "friendly force trackers," which is a military surveillance technology, as part of the effort. Police also had access to a federal surveillance portal operated by the FBI called LEEP, an acronym for "Law Enforcement Enterprise Portal." The FBI's page on LEEP describes it as "a secure platform for law enforcement agencies, intelligence groups, and criminal justice entities" that "provides web-based investigative tools and analytical resources" to help said groups "collaborate in a secure environment, use tools to strengthen their cases, and share departmental documents." Some of the sample use cases for LEEP that the FBI cites include "active shooter incidents," "child abductions" and "takedown operations."

The emails don't specify exactly how these technologies were used, nor do they specify the amount spent on the efforts. However, grad students believe that it could be in the millions.

"Rather than meet us at the bargaining table the UC instead spent close to five million dollars in deploying dozens of UCPD from across the state, California Highway Patrol, and Alameda County sheriffs, and even solicited assistance from counterterrorism intelligence agencies," UCSC Literature PhD student Hannah Newburn said in a statement. "Since when did asking for a raise become a threat to Homeland Security?"

Carlos Cruz, a UCSC PhD student in the history department, told Salon he was given evidence, and an audio clip that Salon listened to, to add to speculation that he was being surveilled by police during the protests. In the audio clip, presumably a police officer is stating Cruz's whereabouts and said his name "Carlos." He also had an alarming in-person encounter with a sergeant.

"I had a sergeant who was able to identify me by first, middle and last name and date of birth," Cruz said, adding there were racist undertones to the exchange. "It's really scary to see how they got my info and knew who I was."

In an emailed statement to Salon, Scott Hernandez-Jason, the Director of News and Media Relations at UC Santa Cruz, told Salon: "Throughout the strike, UC Santa Cruz police officers were focused on supporting the safety of our community on and off campus and protecting the rights of everyone in our campus community, including those engaged in expressive activity."

Hernandez-Jason said the department used the trackers "to know the location of on-duty officers who were helping keep people safe."

"To infer anything else about the use of the trackers would be erroneous. UC Santa Cruz is built across 2,000 acres of hilly land with two entrances, so understanding the location of officers was vital to coordinate their efforts," Hernandez-Jason said. "There was no tracking of students or strikers."

The emails also revealed that after Sen. Bernie Sanders (I-Vt.) tweeted on February 19 in support of striking graduate students at UC Santa Cruz, an officer from the Governor's Office of Emergency Services emailed the California State Threat Assessment Center commander Eli Owen to request assistance to "verify/validate Mr. Sanders schedule." The email referred to the tweet as "intel" that Sanders might appear on the UC Santa Cruz campus.

Hernandez-Jason said about this email that "UC Santa Cruz was paying attention to his publicly posted campaign schedule so that it could begin planning in case he chose to visit the campus."

This isn't the first time military tactics have been used to spy on protesters. The Intercept previously reported on how FBI emails and intelligence reports suggested federal surveillance of Black Lives Matter protests. Similar surveillance happened in the 1960s and 1970s during anti-war protests. Sara Hinkley, a Policy Research Specialist at UC Berkeley Labor Center, told Salon in an emailed statement that whether such a move was worth it for UCSC will be calculated by how tarnished its reputation is for the handling of the wildcat strike.

"In the case of UC, the loss of reputation and academic stability will likely have repercussions for many years," Hinkley said. "It's unfortunate that they chose to treat their own students and employees as an enemy meriting military surveillance."

Hinkley added: "I think it's likely that decision will end up costing them much more than if they had recognized the students' demands and fairly bargained a solution to the real financial stress that graduate students are experiencing."