Sen. Elizabeth Warren has called upon Moncef Slaoui to "divest immediately" over his "huge conflict of interest" 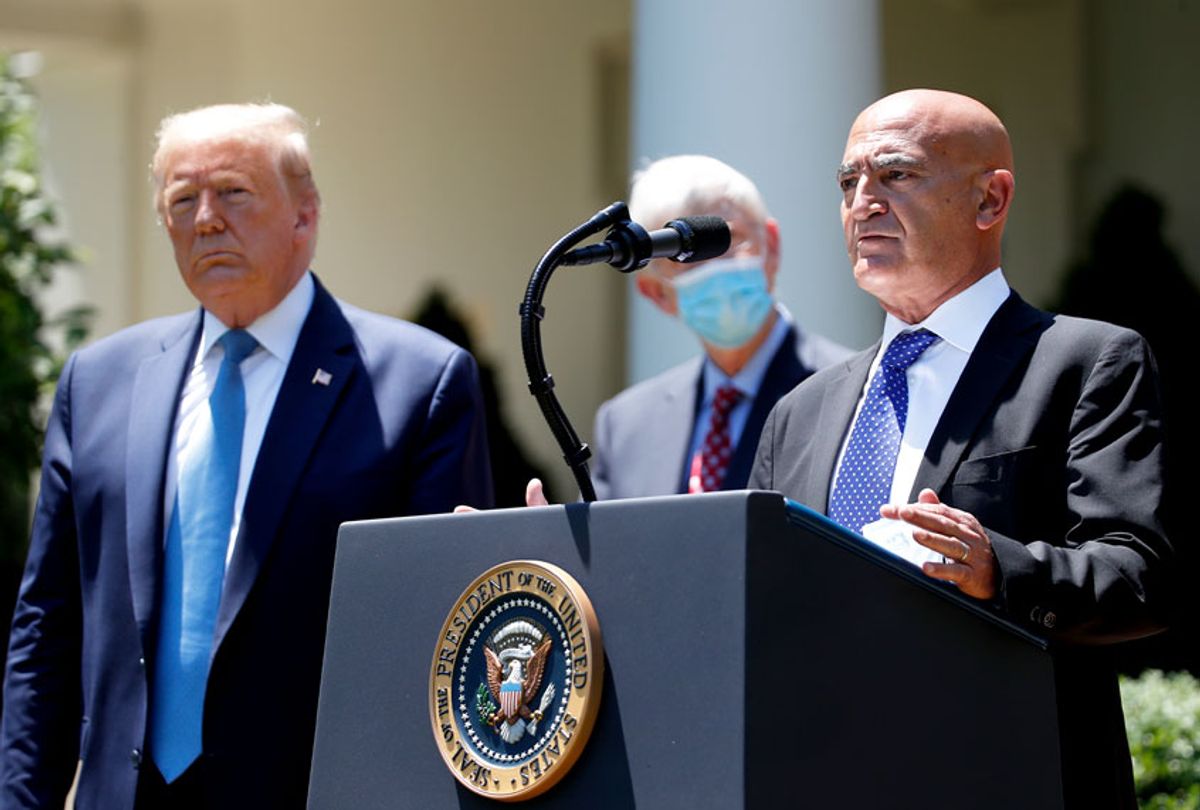 President Donald Trump, left, listens as Moncef Slaoui, a former GlaxoSmithKline executive, speaks about the coronavirus in the Rose Garden of the White House, Friday, May 15, 2020, in Washington. (AP Photo/Alex Brandon)
--

The former pharmaceutical executive named by President Donald Trump to lead a federal coronavirus vaccine development project owns more than $10 million in stock options in a company that has received federal funding to develop such a vaccine.

Trump last week announced that Moncef Slaoui, the former head of vaccine development at the pharmaceutical giant GlaxoSmithKline, would be the chief scientist for "Operation Warp Speed," an administration initiative to speed up the process.

Slaoui stepped down from his position on the board of directors at Moderna, a Massachusetts-based pharmaceutical company which is already planning a clinical trial for a vaccine it developed, to take on the job. His White House position is unpaid, according to the Associated Press.

But Securities and Exchange Commission filings show that Slaoui still holds more than 150,000 stock options in Moderna. Those offerings were valued at more than $10 million on Monday before the company's stock shot up after it reported promising early results from its vaccine testing. Shares have nearly tripled in value since the start of the year, Business Insider reported.

Moderna's stock skyrocketed last month after the company announced it had received $483 million in federal funding for its vaccine development.

Slaoui's appointment raised concerns about a "potential conflict of interest if the company's vaccine is the first to be proven effective," Stat News reported. Sen. Elizabeth Warren, D-Mass., called on Slaoui to "divest immediately," saying his financial ties to the company were a "huge conflict of interest."

"I have very recently seen early data from a clinical trial with a coronavirus vaccine," Slaoui said at a news conference last week. "And this data made me feel even more confident that we will be able to deliver a few hundred million doses of vaccine by the end of 2020."

Slaoui, who appeared to be referring to insider information he saw at Moderna, said Trump's goal to develop a vaccine before the end of the year was "very credible." The fastest a vaccine has made it from a lab to clinics is four years, and most have taken much longer.

Medical experts flanking the president during the news conference — Dr. Anthony Fauci, the top infectious disease expert in the country, Dr. Deborah Birx, the coordinator of the coronavirus task force, and Francis Collins, the head of the National Institutes of Health — were "notably silent" during the optimistic briefing, Stat News noted.

Fauci has tried to temper expectations on a vaccine, warning a Senate committee last week that he doubted one would be available by the time school starts in the fall.

"The idea of having treatments available or a vaccine to facilitate re-entry of students into the fall term would be something that would be a bit of a bridge too far," he said, "even at the top speed we're going."

Fauci has said a vaccine by January might be "in the realm of possibility," though it would require companies to "risk" ramping up production for wide release before they know whether the vaccine works.

"In other words, you don't wait until you get an answer before you start manufacturing. You at risk — proactively — start making it, assuming it's going to work," he told NBC News. "And if it does, then you can scale up and hopefully get to that timeline. I think that is doable if things fall in the right place."

Dr. Rick Bright, the former head of vaccine development at the Biomedical Advance Research and Development Authority (BARDA), which provided Moderna with federal funding, has been less optimistic about the timeline.

"A lot of optimism is swirling around a 12-to-18-month time frame if everything goes perfectly. We've never seen everything go perfectly," Bright, who blew the whistle on the Trump administration's coronavirus response after he was ousted for clashing with other officials, told a House committee last week. "I still think 12 to 18 months is an aggressive schedule, and I think it's going to take longer than that to do so."

Though Fauci has suggested it would take less than 18 months to develop a vaccine, Bright noted that "doesn't mean for an FDA-approved vaccine." Bright also raised concerns about "Project Warp Speed."

"My concern is if we rush too quickly and consider cutting out critical steps, we may not have a full assessment of the safety of that vaccine, so it's still going to take some time," he said.

Fauci acknowledged that there were still many questions about any possible vaccine.

"There's no guarantee that the vaccine is actually going to be effective," he said. "You can have everything you think that's in place, and you don't induce the kind of immune response that turns out to be protective and durably protective. So one of the big unknowns is: Will it be effective? Given the way the body responds to viruses of this type, I'm cautiously optimistic that we will with one of the candidates get an efficacy signal."