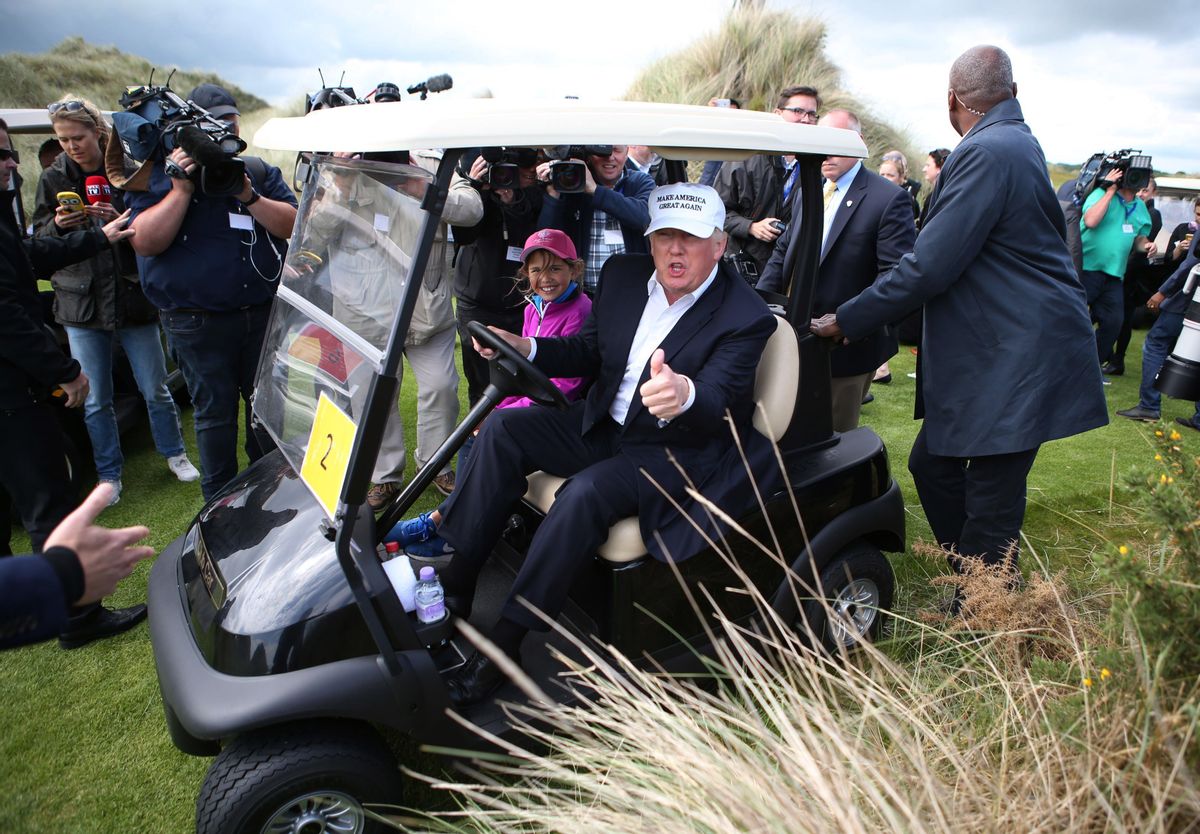 US presidential candidate Donald Trump chats with the watching media aboard a golf cart with granddaughter Kai after he arrived at the Trump International Golf Links at Balmedie, near Aberdeen, Scotland, Saturday June 25, 2016. Presidential hopeful Donald Trump is on a short break away from his presidential campaign. (Andrew Milligan / PA via AP) UNITED KINGDOM OUT - NO SALES - NO ARCHIVES (AP)
--

Last week in the Washington Post, journalists David A. Fahrenthold and Joshua Partlow reported that according to federal records the Post had obtained, the federal government had "paid at least $970,000 to President Donald Trump's company," the Trump Organization, "since Trump took office — including payments for more than 1600 nightly room rentals at Trump's hotels and clubs." And Fahrenthold discussed the Post's findings when he was interviewed by MSNBC's Ari Velshi over the weekend.

"This is a transaction where Trump is basically the buyer and the seller," Fahrenthold told Velshi. "When he goes to his properties, his aides (and) his Secret Service agents come with him — they need to stay near him to protect him. And so, they're basically sitting ducks. They're captive customers. The Trump Organization can charge them whatever they want. The only limit is what the Trump Organization thinks is fair given that this is the taxpayers' money."

Fahrenthold went on to explain to Velshi how the Post came up with the $970,000 figure."We tried to measure these expenditures by the Trump Organization's own standard,"  Fahrenthold noted. "(The Trump Organization's) Eric Trump had told the world that he only charged about $50 per night when the government came and stayed with his father. We looked at least 1600 room rentals, as you saw (in the article), and could not find one single example that met that definition. In every case, the rates were much higher."

Velshi asked Fahrenthold if there was any "accountability" for the Trump-related expenses being charged to U.S. taxpayers, and the Post reporter replied that the "usual conflict of interest statutes" don't apply in this case.

"If this was the secretary of agriculture or some manager in the Department of the (U.S.) Army," Fahrenthold explained, "they could be fired or even prosecuted for steering business to their own personal properties. The president is exempt from those rules…. There's really nothing legal stopping him from doing this."