Scandal at State: A huge arms deal, a revolving-door lobbyist and the fired inspector general

An $8 billion Saudi arms deal, a revolving-door lobbyist and a fired inspector general: Is Pompeo in trouble? 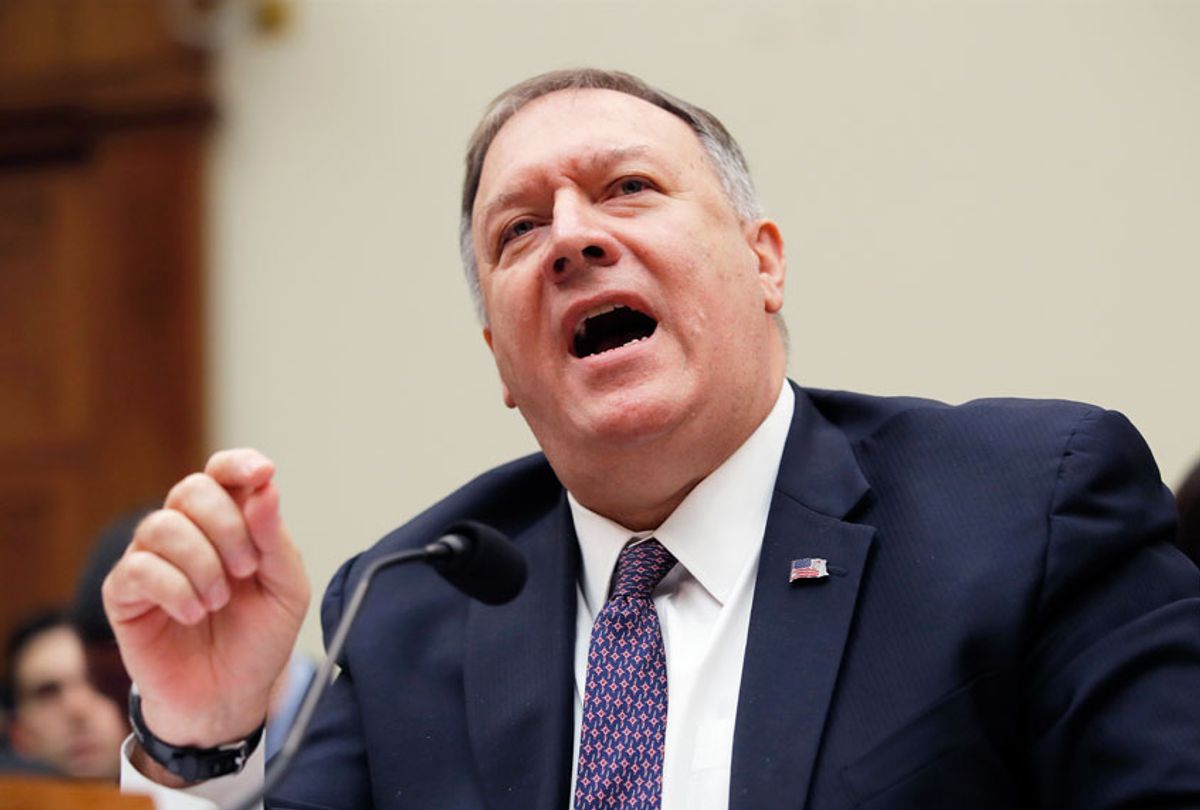 Charles Faulkner, a former Raytheon lobbyist and former principal deputy secretary of state who was forced to resign in 2019 due to conflicts of interest surrounding an $8 billion arms sale to Saudi Arabia, was rehired by the administration four months later, Salon has learned.

Faulkner's resignation kicked off two investigations, and appears to have landed him in the center of a probe of that arms deal by the recently-fired State Department inspector general.

The deal funneled $2 billion to defense contractor Raytheon, a firm Faulkner formerly represented as a lobbyist for BGR Group. Faulkner was reportedly forced to resign from his senior State Department position last May amid concerns about the key role he played in pushing the sale, which bypassed congressional objections through the rare step of declaring a national emergency.

In September 2019, however, the Trump administration quietly rehired Faulkner as chief of staff in the Office of Legislative Affairs at the Department of Homeland Security, four months following his resignation at State and right in the middle of the Ukraine scandal that led to President Trump's impeachment.

Faulker lobbied on behalf of Raytheon for the full duration of his stint BGR, starting in 2012. His LinkedIn page and filings under the Foreign Agent Registration Act report that Faulkner left BGR in May 2016, two months after the firm registered as an agent for the Saudi Arabian government. (Several months late.)

A year later, in June 2017, Faulkner joined the State Department as the chief Congressional liaison in the office of legislative affairs, a position he held until his resignation in May 2019. The administration declared the national emergency to expedite the arms sales that same month.

President Donald Trump's lobbying ban signed shortly after his inauguration in January 2017, allowed lobbyists to enter the administration immediately, but imposed a two-year ban on such employees from working on issues related to their prior lobbying portfolio. Some officials received waivers, but reportedly not Faulkner, whose timeline would appear to violate Trump's order.

Moreover, it was specifically Faulkner's connection to the Saudi arms deal — which allowed Raytheon to cooperate with the Saudi government to build precision-guided bombs at plants in Saudi Arabia, reportedly giving the Saudis an inside look at sensitive U.S. military technology — that sparked an investigation last June by the House Foreign Affairs Committee.

"I want to hear from the State Department official tomorrow: Who all was involved in this decision making?" Rep. Ted Lieu, D-Calif., a committee member, said to the New York Times last June. "It would be problematic if a former lobbyist for a defense contractor was involved."

"I have learned that there may be another reason for Mr. Linick's firing. His office was investigating — at my request — Trump's phony declaration of an emergency so he could send weapons to Saudi Arabia," Engel said in a statement. "We don't have the full picture yet, but it's troubling that Secretary Pompeo wanted Mr. Linick pushed out before this work could be completed."

"I went to the president and made clear to him that Inspector General Linick wasn't performing a function in a way that we had tried to get him to, that was additive for the State Department, very consistent with what the statute says he's supposed to be doing," Pompeo said. "The kinds of activities he's supposed to undertake to make us better, to improve us."

According to initial reports, Linick had been looking into allegations that Pompeo had told a political appointee to run personal errands at taxpayer expense, including walking Pompeo's dog, picking up dry cleaning and making dinner reservations for the secretary and his wife.

However, reports about the inspector general's work quickly expanded to the investigation into the workings behind the Saudi arms sale, in which a minority group of State employees steamrolled diplomatic and congressional officials.

At the time of those internal negotiations, which began in 2018, the administration had been trying to push weapons deals through with both Saudi Arabia and the United Arab Emirates — understood as principal U.S. allies in the Gulf region — amid increasing tensions with Iran. But a recently-enacted law required Pompeo to suspend such military support unless he certified in a letter to Congress that he believed the Saudis were doing their best to keep civilian casualties to a minimum in their brutal air war on Yemen.

During the contentious 2018 debates, Sen. Bob Menendez, D-N.J., placed a freeze on a $2 billion Raytheon proposal, which entailed the sale of 120,000 precision-guided missiles to the Saudi-led coalition involved in the Yemen war.

Faulkner and his legislative affairs team reportedly encouraged Pompeo to certify that Saudi Arabia had in fact addressed the casualty issue, reportedly out of concern over the pending arms sales, which included the stalled Raytheon deals, government officials told the Wall Street Journal.

While arguments on these issues were ongoing in the U.S., a contingent of Saudi agents, believed to be acting at the direction of Crown Prince Mohammed bin Salman, murdered and dismembered Washington Post journalist Jamal Khashoggi in the Saudi embassy in Istanbul.

In the aftermath of that apparent crime, BGR joined four other prominent lobbying firms in dropping its lucrative contract with the Saudi government, reportedly worth $80,000 a month.

In May 2019, Pompeo overruled a majority of State Department staff and sided with Faulkner, sidestepping Congress and issuing an emergency declaration that certified the Saudis were acting in accord with U.S. concerns. Faulkner resigned from the department shortly thereafter.

BGR did not register as a Raytheon client in 2019, the year the arms sale went through and the year Faulkner resigned at the State Department. It was the first time in a decade that BGR had not filed as a Raytheon representative.

On Monday, Pompeo told the Washington Post that Linick's ouster was not related to any ongoing investigation, although his language appeared deliberately confusing. "It is not possible that this decision, or my recommendation rather, to the president rather, was based on any effort to retaliate for any investigation that was going on or is currently going on," Pompeo said.

The State Department and the White House did not reply to Salon's requests for comment.

Pompeo also denied any knowledge of the pending release of an investigation. "Because I simply don't know. I'm not briefed on it. I usually see these investigations in final draft form 24 hours, 48 hours before the IG is prepared to release them," he told the Washington Post on Monday. "So it's simply not possible for this to be an act of retaliation. End of story."

His denial appears to contradict reports by Politico and CNN that Pompeo had recently refused to sit for an interview with the inspector general's office as part of its investigation into the Saudi weapons deal.

Pompeo said on Monday that he recalled only one case during his tenure at the department in which he knew of the existence of an investigation before a report on that investigation was released to the public. According to the Post, that investigation had been "involving a national security matter."

In 2015, BGR was paid $90,000 to represent the Ukrainian Investment Alliance. Public disclosure forms indicate Faulkner was the sole lobbyist on the account.

The same year BGR Group hired Faulkner, it also added Kurt Volker, the former ambassador who collaborated with Rudy Giuliani in the Ukraine scandal. That scandal also involved a block on a State Department weapons deal in the summer of 2019, a deal that directly benefited Raytheon.

Volker told Salon he did not know about investigations into Faulkner or the Saudi deal, beyond what he had read in recent press reports.

On the same day in July 2019 that the Saudi arms deal was passed by the Senate, a Saudi-led coalition air strike on a market in northern Yemen killed at least 10 civilians, some of them children.

Reached for comment, Faulkner told Salon that he was not aware of the investigations beyond recent news reports. Asked whether he had been contacted by the State Department, Linick or the House Foreign Affairs Committee, he said, "No comment," then hung up.