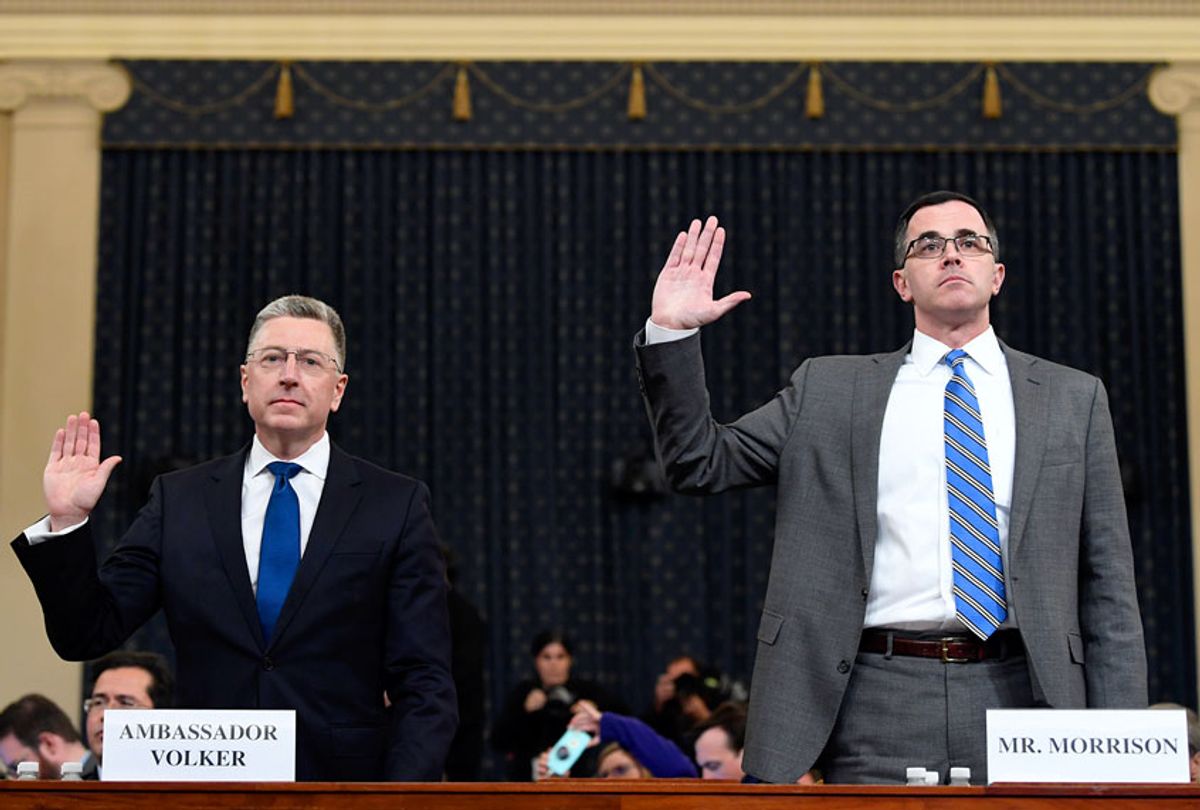 Ambassador Kurt Volker, left, former special envoy to Ukraine, and Tim Morrison, a former official at the National Security Council are sworn in to testify before the House Intelligence Committee on Capitol Hill in Washington, Tuesday, Nov. 19, 2019, during a public impeachment hearing of President Donald Trump's efforts to tie U.S. aid for Ukraine to investigations of his political opponents. ( (AP Photo/Susan Walsh)
--

The second half of Tuesday's hearing offered something new in the Donald Trump impeachment inquiry: Witnesses called by the Republican minority on the House Intelligence Committee. It's understandable why Republicans would want these two men.

One of them was Tim Morrison, a former National Security Council aide who is among the few people directly exposed to Trump's famous phone call with Ukrainian President Volodymyr Zelensky who claims to believe there was nothing wrong with it.  The other was Kurt Volker, a former special envoy to Ukraine, who appears to have been a major actor in Trump's extortion scheme in that country. Indeed, Volker was deemed one of the "three amigos" — along with Energy Secretary Rick Perry and Trump donor/EU ambassador Gordon Sondland — who Trump entrusted with Ukrainian relations as he exerted increasing pressure on the country's leaders to give into his extortion scheme.

But even though these two were Republican witnesses, they still made the case for impeachment stronger. Morrison even confirmed the central allegation against Trump — that the president was conditioning military aid on a public statement from Zelensky about "investigations" into Democrats.

Volker's main concern on Tuesday appeared to be self-preservation. His statement was focused on spinning a tale where the extensive public evidence of his deep involvement in this extortion conspiracy was all perfectly innocent. While acknowledging that he knew Rudy Giuliani, Trump's personal lawyer, was interested in conspiracy theories involving Ukraine, Volker downplayed his knowledge of what Trump and Giuliani were up to.

But there's a problem with this story: Earlier this fall, a cache of damning text messages between Volker, Sondland and an aide to Zelensky was released, making clear that Volker was deeply involved in trying to talk a reluctant Zelensky into announcing "investigations," and that Volker agreed with Sondland that they had to get Zelensky to provide the "deliverable." Volker tried to thread this needle in Tuesday's testimony by claiming he hoped that the "deliverable" could be met with vague anti-corruption sentiments and investigations. That's tough to swallow, since Volker has admitted he understood what Giuliani was up to in Ukraine.

To drive this home, House Democratic counsel Daniel Goldman made Volker read many of those text messages out loud, illustrating the extent of his involvement — and the implausibility of Volker's claim that he didn't know what ultimate goal he was serving by exerting pressure on Zelensky.

It's complicated! But the big takeaway here is that even though Volker was one of the Republican witnesses, his focus on covering his rear end meant that his testimony only damaged the Republican effort to distract from Trump's crimes. Volker repeatedly denounced Trump and Giuliani's attacks on Biden, calling them a "conspiracy theory" and saying it wasn't "credible" in any way that Biden had done what Trump is accusing him of doing. He also tried to defend himself by portraying Trump as a babbling moron who is best ignored. (Which was, to be honest, the most believable argument Volker had to offer.)

Volker did try a half-baked defense of Trump, which was, not to put too fine a point on it, that Trump is an idiot. He portrayed the president as completely in thrall to Giuliani's conspiracy theories, raving that Ukrainians "tried to take me down." He claimed that his own part in the scheme was merely to persuade Trump to be less hateful toward Ukraine, but said that was difficult because puppet-master Giuliani was controlling Trump. This is far-fetched, to be sure, but one can see why Volker could find no better defense of Trump than framing the president as too dumb to be responsible for his own behavior.

For Morrison's part, even though he has claimed that he saw nothing illegal in Trump's call, House Democrats did get him to admit that he had reported the call to the National Security Council lawyer, as had earlier Tuesday witness Lt. Col. Alexander Vindman. Morrison claimed this was purely out of concern for political optics, but the answer felt lame after Vindman's earlier testimony that drove home the seriousness of reporting the president's behavior to an agency lawyer. More to the point, Morrison's admission that the whole thing looked bad is just more evidence that, no matter how hard you squint and how much you lie to yourself, Trump still looks like someone who should be as far away from the Oval Office as humanly possible.

House Republican counsel Steve Castor used his time questioning Morrison to keep up Republican efforts to discredit Vindman. That will probably play big on Fox News, but it's hard to imagine these efforts getting much traction, especially in light of how bad Volker's testimony made Trump look.

But the overall impression from the second half of Tuesday's hearing is that, yet again, Republicans have nothing to defend Trump with. House Intelligence ranking member Devin Nunes, R-Calif., has been leaning heavily on conspiracy theories to distract the public, often the very same ones Trump himself has been pushing about Biden and the supposed Ukrainian interference in the 2016 election (neither of which has any merit, to be clear). Even though these witnesses had been called to help the GOP case, they ended up kneecapping Nunes' reliance on these conspiracy theories by making clear how baseless they are.

The only question now is how the propaganda masters at Fox News can take the thin gruel Republicans tried to cook up on Tuesday afternoon and convince their viewers it's delicious. They have an audience that's eager to be fooled, after all. But for anyone else watching, it's clear that even Trump's defenders see him as an idiot spewing conspiracy theories that threaten to sow international chaos.