Lt. Col. Vindman and Williams blow a hole through another Trump defense — and implicate Pence in Ukraine scandal 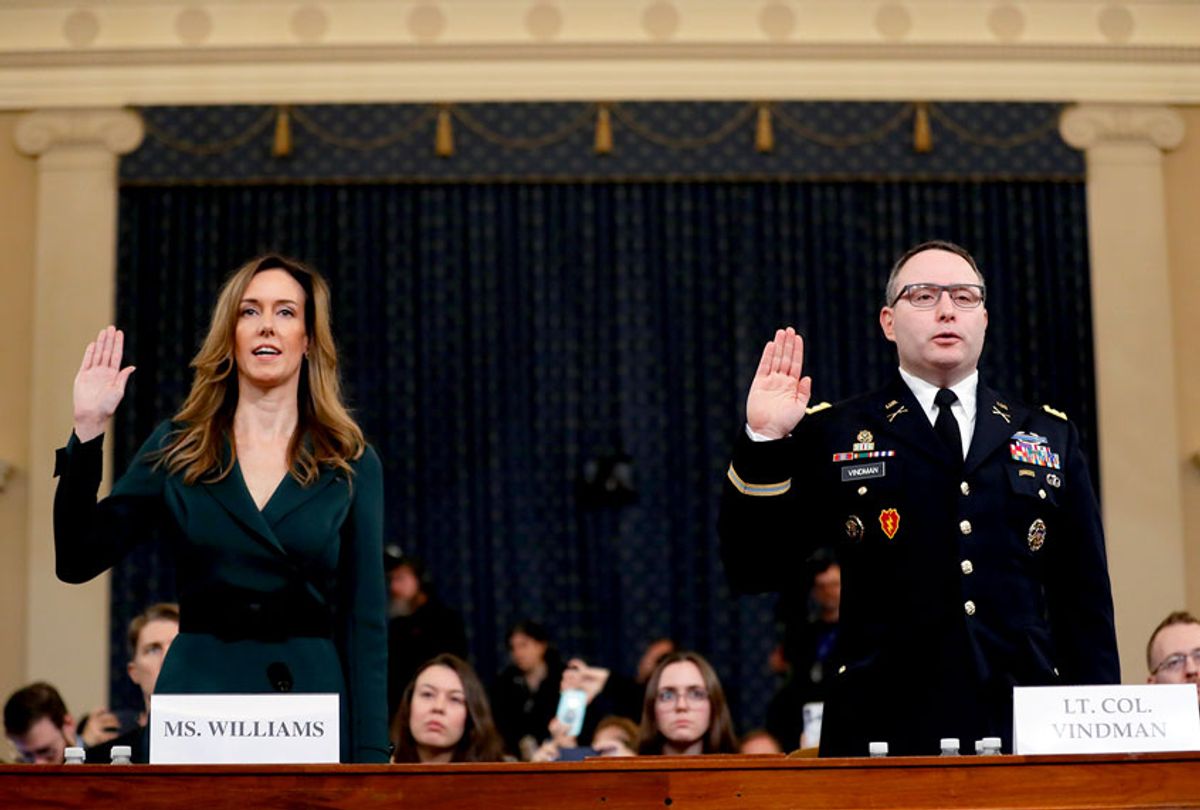 In the panoply of contradictory and incoherent defenses of Donald Trump, a favorite of Republicans has been to harp on the claim that witnesses to Trump's extortion scheme against Ukraine were all "second-hand" or "third-hand." This has always been confounding, as the official summary readout of the famous phone call between Trump and Ukrainian President Volodymyr Zelensky shows Trump clearly conditioning military aid and U.S. support on Zelensky giving a public boost to Trump's conspiracy theories about former Vice President Joe Biden and other Democratic leaders. The witnesses so far have simply affirmed what the written record demonstrates amply.

But just in case there was any doubt, Democrats brought in two witnesses on Tuesday who  listened in on the call where Trump did the threatening: Jennifer Williams, an aide to Vice President Mike Pence, and Lt. Col. Alexander Vindman, a Ukraine specialist on the National Security Council.

Unlike the professional diplomats who testified last week, Williams and Vindman were more hesitant witnesses, clearly unaccustomed to such public-facing work and visibly nervous. Vindman, in his opening statement, publicly assured his father, "I will be fine for telling the truth," explaining that his family had left the Soviet Union, where people were routinely imprisoned and killed for speaking truth to power. Still, his statement had no small amount of bravado: The U.S. Army has reportedly looked into moving Vindman and his family to a safe house, due to fear that Trump's well-armed fans might decide to take their fury out on the decorated officer and wounded combat veteran.

Vindman was the main focus of the morning, even though he didn't say much beyond what has already been released in his closed-door testimony. He testified that he was already suspicious about Trump's designs on Ukraine, and had warned Zelensky to stay out of U.S. politics for his own good. He then realized, much to his chagrin, that his fears were coming true when he heard Trump extorting Zelensky during that July 25 call. Vindman added that, "without hesitation," he reported the call to an NSC lawyer.

"It is improper for the president of the United States to demand a foreign government investigate a U.S. citizen and political opponent," Vindman said.

He worried that if Zelensky were to give in — as he almost did, stopped only by the whistleblower complaint — that could have resulted in "Ukraine losing bipartisan support, undermin[ing] U.S. national security, and advanc[ing] Russia’s strategic objectives in the region."

Williams, for her part, seemed mostly there to affirm Vindman's testimony on the facts. But as soon as House Intelligence Chair Adam Schiff, D-Calif., began to question Williams, he used her testimony to implicate Pence in the Ukraine scandal. Schiff asked Williams about the contents of a Sept. 18 call between Pence and Zelensky, and before she could answer, the vice president's counsel interrupted, declaring that the information was "classified" and insisting that a readout released by the White House contained sufficient information.

In truth, the readout in question is a joke — it's literally 83 words long, and manages to say less than 83 words usually do. Since the Trump White House has a known habit of using the classification system to hide politically damaging information, this episode suggests strongly that Pence is deeply enmeshed in this whole scheme. That, of course, makes sense from Trump's point of view: He needs the insurance in case Republicans start wondering whether it might be easier to dump Trump overboard and set up Pence to run in 2020.

Democrats also used Williams to establish that when Pence was pulled from attending Zelensky's inauguration, at Trump's orders, it was not for logistical reasons — the suggestion being, rather, that it was done to turn up the heat on Zelensky in this extortion campaign.

Republicans, as usual, offered no affirmative defense of Trump. Instead, GOP members of the committee focused on throwing out conspiracy theories and distractions, with a clear eye towards giving Fox News some clips to run and stuff to talk about besides Trump's long list of alleged crimes and the large amount of supporting evidence.

Beyond the usual litany of dense conspiratorial ranting that he's been trotting out in these hearings, ranking member Devin Nunes, R-Calif., made one big play: Trying to bully Vindman into outing the original whistleblower. In a series of increasingly hot-headed questions, Nunes tried to trick Vindman into believing he was legally obligated to name the whistleblower. Schiff finally interrupted, declaring that "the whistleblower has the right to anonymity and these proceedings will not be used to out the whistleblower." Later, Rep. Jim Jordan, R-Ohio, did the same thing, asking who Williams and Vindman had talked to about the July 25 call, with a clear eye toward uncovering the whistleblower's identity that way.

If that wasn't despicable enough, Nunes and Republican counsel Steve Castor went all in on trying to discredit Vindman by implying that he's a double agent or even a criminal. Nunes angrily asked Vindman if he wanted to plead the Fifth Amendment when Vindman refused to out the whistleblower — language that implied Vindman has criminal exposure, when there is absolutely no reason to believe that.

Later, Castor harped on an episode in which Ukraine's national security adviser asked Vindman to be that nation's defense minister, an offer that seems to have been meant as a joke and certainly was not taken seriously by Vindman. This line of questioning seemed to served no other purpose than to give Fox News hosts more grist for conspiracy theories about Vindman being disloyal to the United States.

This behavior from Republicans is worse than clownish antics. It's witness intimidation. They know full well that Vindman's safety is already threatened. By stoking lies about him, they are putting him in more danger. They know that Trump's avid fans have both guns and a deep-set hatred for the whistleblower and anyone else who seems to endanger their overlord. This sends a clear signal to others in the executive branch: If you speak out, you too will be in danger.

Democrats, for their part, mostly stuck to emphasizing the sheer volume of evidence against Trump. During his questioning of the witnesses, House Democratic counsel Daniel Goldman made sure to carefully read as much of the July 25 call readout as possible on camera, which served to remind viewers of how damning it is. Trump keeps barking, "Read the transcript!"— but, of course, that's the last thing he wants his followers to do. Democrats, at least, made sure parts of it were read out loud on TV, even on Fox News, which is airing the hearings.

This abundance of evidence explains, of course, why Republicans are getting increasingly arcane and grotesque in their defenses of this indefensible president, and turning on vile tactics like trying to out the whistleblower or smear the reputations of witnesses. They have nothing left but giving up their last vestiges of illusory morality and decency, all in defense of Trump, a man who would cut every single one of them if he thought that might help him.