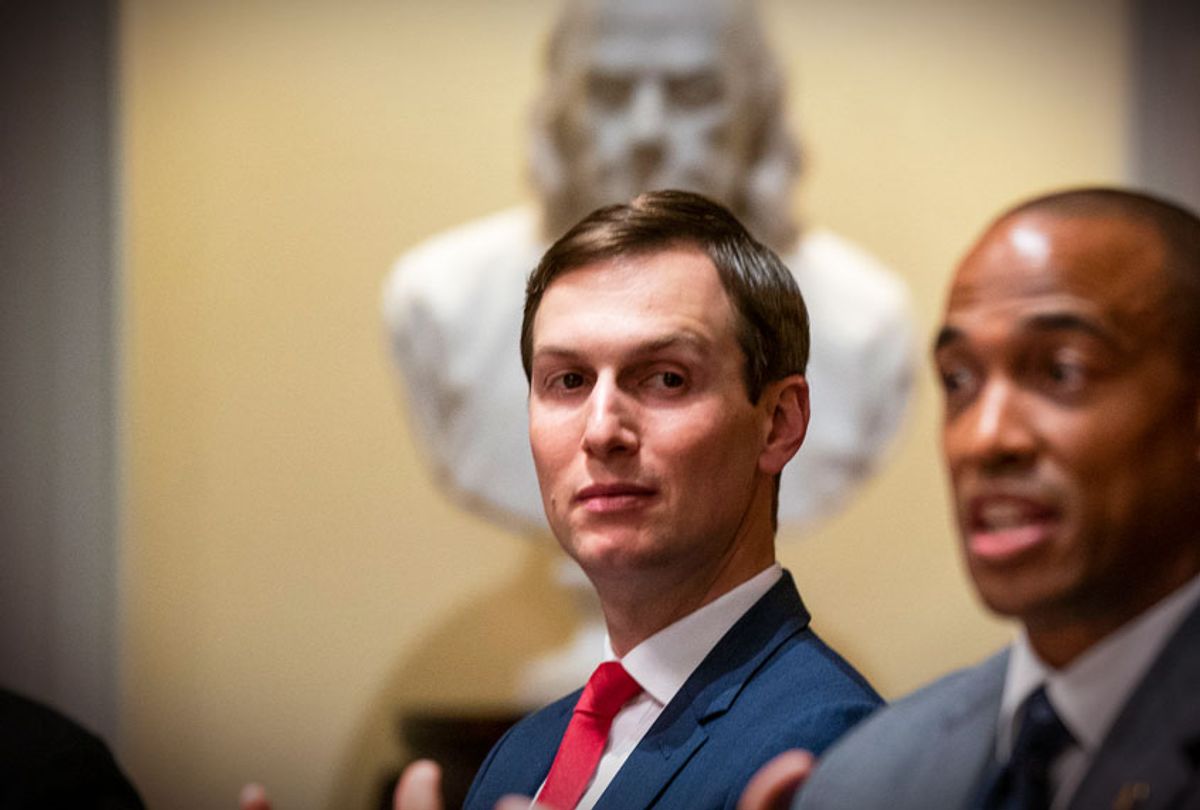 Jared Kushner, the son-in-law of President Donald Trump whose volunteer coronavirus task force was compared to a "frat party," told associates he wants to cut down the Republican Party's entire 2020 platform to fit on one pocket-sized card.

Axios reports that Kushner wants to reduce the GOP's entire 2020 platform — which will cover domestic, economic, foreign and policy; ideology; and the national response to the coronavirus pandemic, among other topics — into 10 bullet points. For comparison, the 2016 platform was 58 pages long.

Kushner seeks "something like the 10 principles we believe in," according to Axios. He has tasked aides with digging up old Republican election platforms that look less like a policy map and more like a "mission statement."

As evidence this isn't a unique or strange idea, a campaign source pointed Axios to the Republican Party's single-page platform from 1856, an election which the GOP lost to Democrat James Buchanan, who is widely considered one of the worst presidents in history after his failed leadership led directly to the outbreak of the Civil War.

Following six months of work, Kushner's team claims to have successfully drafted a single-page platform, though it has not been circulated, according to Axios. Kushner appears to be focused on reforming the party's tone, which he finds too alienating. For instance, he has allegedly said he does not want the platform to mention "gay conversion therapy."

The 2016 platform included an allusion to the process, which in addition to being discredited as junk science is widely regarded as cruel and has been banned in other countries, as well as a number U.S. states. "We support the right of parents to determine the proper medical treatment and therapy for their minor children," the 2016 platform said.

Kushner has also reportedly resisted party efforts to change the phrase "school choice" to "education freedom scholarships," arguing that the new language will not appeal to black voters. Secretary of Education Betsy DeVos has been using the phrase for at least a year.

Kushner wants to scrap the word "freedom" altogether after polling "showed it doesn't appeal" to the back community, according to Axios. Such a move has, perhaps unsurprisingly, been meet with resistance from party brass who have brandished the word for decades.

The platform adds another major responsibility to Kushner's almost incomprehensibly diverse portfolio, slotted among peace in the Middle East, the opioid epidemic, criminal justice reform, revamping the North American Free Trade Agreement, building the border wall and helming the Office of American Innovation, an outfit dedicated to overhauling the structure and function of the government.

Kushner is also in charge of running President Donald Trump's re-election campaign. Though he has delegated the project to Trump's White House campaign adviser Bill Stepien, who has teamed up with the Republican National Committee, everyone on the squad answers to Kushner.

Such a sweeping overhaul is far from simple, and though Trump has more leverage as incumbent than he did as a candidate, Kushner will have to wrangle the 112 delegates on the platform committee, many of whom are staunch conservatives and will likely object to many of the revisions in principle. Most White House officials do not even know about the project, according to Axios.

Additionally, special interest groups pour millions of dollars into lobbying for platform positions, which will ultimately pass or fail at the Republican National Convention this August when the delegates cast their votes.

Further, Kushner, who like his wife Ivanka Trump is formerly a registered Democrat, has not received a warm welcome in conservative GOP circles, where some see him as being too liberal for the party. It seems likely he will have a tough time slipping his platform past the same people who in 2016 made sure to declare marriage as between one man and one woman.

Though Trump himself did not have much muscle in 2016, his then-campaign manager, seasoned political operative and GOP insider Paul Manafort, had enough clout in the party to shape sections of the platform, most famously pulling a last-minute 180 on Russian aggression towards Ukraine.

The Trump campaign, however, has pressured state party leaders to nominate Trump loyalists as delegates, and given how obsequious classic veteran conservatives have been to the president, it is reasonable to expect Kushner's general ambition to significantly streamline the platform will meet with a large measure of success — which, in staking out such an extreme initial position, could be his goal in the end.