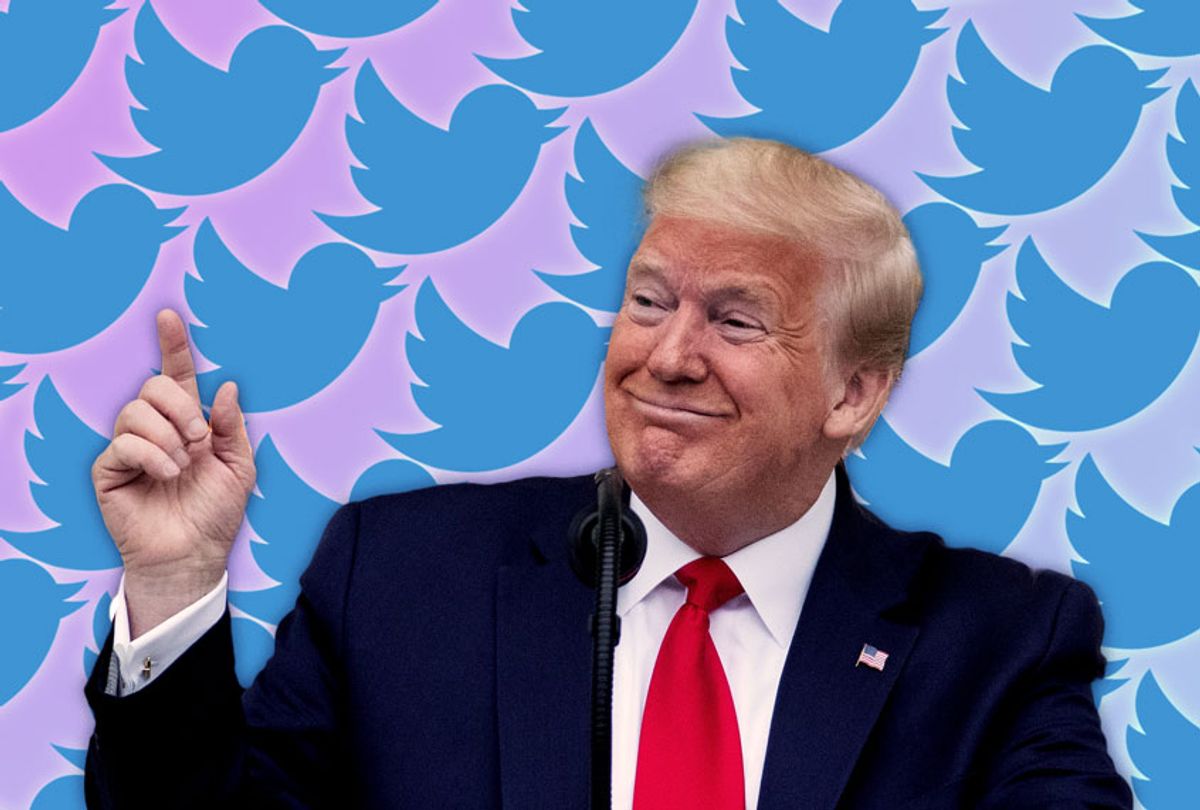 Twitter is facing increased scrutiny over the content it allows on its platform as the coronavirus pandemic — and President Donald Trump's efforts to salvage his presidency amid the pandemic — consume international media attention.

One controversy involves a letter written last week to Twitter CEO Jack Dorsey by Dr. Timothy J. Klausutis, whose wife Lori Kaye Klausutis died in 2001 from an undiagnosed heart condition which caused her to fall and hit her head at work. President Donald Trump and his son, Donald Trump Jr., have spread conspiracy theories that she was murdered by Joe Scarborough, the MSNBC host for whom she worked at the time, back when he was a Republican congressman from Florida.

"The frequency, intensity, ugliness, and promulgation of these horrifying lies ever increases on the internet," Klausutis wrote. "These conspiracy theorists, including most recently the President of the United States, continue to spread their bile and misinformation on your platform disparaging the memory of my wife and our marriage. President Trump on Tuesday tweeted to his nearly 80 million followers alluding to the repeatedly debunked falsehood that my wife was murdered by her boss, former U.S. Rep. Joe Scarborough. The son of the president followed and more directly attacked my wife by tweeting to his followers as the means of spreading this vicious lie."

A spokesperson for Twitter responded that the platform will not remove the offending posts.

"We are deeply sorry about the pain these statements, and the attention they are drawing, are causing the family," the spokesperson explained in a statement. "We've been working to expand existing product features and policies so we can more effectively address things like this going forward, and we hope to have those changes in place shortly."

This is not the only controversy facing Twitter. A new report claims that Twitter's automated system for labeling tweets that contain misinformation about the coronavirus pandemic has made mistakes.

Twitter has incorrectly placed labels on stories that provide accurate information about the debunked 5G coronavirus conspiracy theory, according to CNET. These have included tweets from the BBC, Reuters, Voice of America and Wired. One Twitter user found that simply typing in "5G," "coronavirus" or "COVID-19" in a tweet will cause Twitter's label – which urges users to check out reliable information — to pop up. The incorrect conspiracy theory claims that 5G, meaning the portion of the electromagnetic spectrum devoted to fifth-generation cellular signals, carries the coronavirus — a baseless belief that has prompted some people to destroy cell phone towers.

"We are building and testing new tools so we can scale our application of these labels appropriately. There will be mistakes along the way," a spokesperson for Twitter explained in a statement. "We appreciate your patience as we work to get this right, but this is why we are taking an iterative approach, so that we can learn and make adjustments along the way."

When announcing its new policy earlier this month, Twitter explained that it would label three types of information: Misleading information, defined as "statements or assertions that have been confirmed to be false or misleading by subject-matter experts," disputed claims and unverified claims.

"Our teams are using and improving on internal systems to proactively monitor content related to COVID-19," wrote Yoel Roth and Nick Pickles, the Head of Site Integrity and Director of Global Public Policy Strategy & Development. "These systems help ensure we're not amplifying Tweets with these warnings or labels and detecting the high-visibility content quickly. Additionally, we'll continue to rely on trusted partners to identify content that is likely to result in offline harm. Given the dynamic situation, we will prioritize review and labeling of content that could lead to increased exposure or transmission."

This is not the first time that special scrutiny has been paid to how Twitter directly responds to the coronavirus pandemic. Carnegie Mellon University's Center for Informed Democracy & Social Cybersecurity revealed earlier this month that bot activity may be responsible for nearly 45 percent to 60 percent of Twitter account activity discussing the coronavirus pandemic. The accounts frequently tout information that is inaccurate or unsafe, such as calling for a reopening of the American economy and an end to stay-at-home orders, providing false medical advice and pushing conspiracy theories about the origin of the pandemic.

The world's intelligence agencies, including the Chinese government, have also taken advantage of Twitter for its own purposes. Bret Schafer, a digital disinformation fellow at the Alliance for Securing Democracy, claims that China's official sites have almost doubled their output since January, with many of them pushing conspiracy theories that attempt to convince people that the virus did not originate in their country. China's Foreign Affairs Ministry, for example, has pushed the conspiracy theory that the virus came from an America bio-lab such as the U.S. Army Medical Research Institute of Infectious Diseases at Fort Detrick, Maryland.

China's propaganda counter-offensive seems to be a response to earlier inflammatory remarks about the Chinese government made by President Donald Trump and other American officials. "Obnoxious and childish as this is, it should be noted that such Chinese statements have generally mirrored earlier American statements," Robert Daly, director of the Kissinger Institute on China and the United States at the Wilson Center, told NBC News. "Rhetorically, China is counterpunching — not throwing the first blow."