The day Trump signed the CARES Act, Bill Hagerty's Senate campaign got a $2.5 million loan from bank he helped run 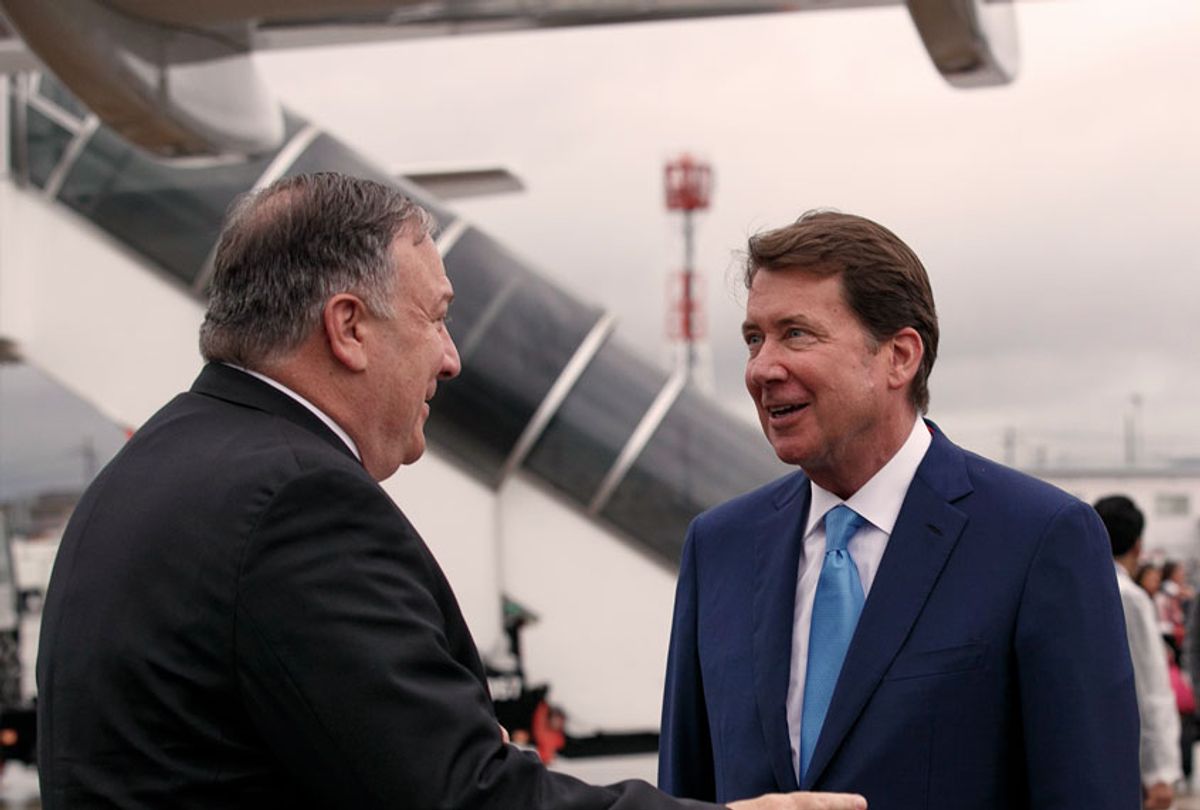 Bill Hagerty, a former U.S. ambassador to Japan who is now a Republican candidate for U.S. Senate in Tennessee, has secured campaign funds from a number of people and corporate entities connected to the White House economic recovery council — of which he's a member.

Since September, the Hagerty campaign has pulled in $33,000 in campaign contributions from corporations and individuals on the task force. The campaign also took out a $2.5 million loan from Pinnacle Financial Partners on March 27, the same day that President Trump signed the $2.2 trillion Coronavirus Aid, Relief and Economic Security Act.

Hagerty formerly sat on the board of directors at Pinnacle. Half the members of current board have donated to Hagerty's campaign as individuals, most of them giving the maximum legal amount.

The loan amount was half of a $5 million line of credit that Pinnacle extended to Hagerty's campaign, even though the bank had lost nearly a third of its valuation on the NASDAQ Financial-100 in the previous month.

Small business owners had a more difficult time secure loans under the CARES Act than did large companies with longstanding relationships to financial institutions. Banks, however, pulled in $10 billion in fees from the program.

Hagerty's fellow task force donors include Ross Perot Jr., Ray Washburne and Art Laffer, all of whom maxed out to his campaign.

Laffer, a Trump Presidential Medal of Freedom honoree who once described the federal minimum wage law as the "Black Teenage Unemployment Act," headlined a call-in fundraiser for Hagerty earlier this month.

A campaign email promoting that event asks for contributions and suggests that donors may get inside economic information, invoking Hagerty and Laffer's association with the White House.

"Bill and Dr. Laffer serve together on the recently appointed White House Economic Recovery Task Force and will offer an informative perspective on the recovery efforts," the email says.

Kudlow, who during that call described Hagerty as a "man of uncommon integrity," made clear he was not acting in his official capacity as a White House adviser, then proceeded to discuss the federal government's plans for reopening.

"We are coming down, I believe, to the last weeks of this shut-in of our economy," he said at one point, noting recent public health statistics. "It's been a tough grind."

Kudlow ended the discussion by saying, "Open your hearts. Open your wallets. Get Hagerty to the Senate."

Federal law bars members of the executive branch from engaging in political activity in their official government capacity, including making endorsements or working on fundraising efforts.

Hagerty is the only member of the task force seeking federal elected office.

Numerous corporations involved with the task force have also made contributions to Hagerty's campaign, including Bank of America, Community Health Systems, Crowley Maritime, the International Franchise Association, the French alcoholic-beverage giant Pernod Ricard and the Southern Company Employee PAC, an energy group. These companies have to date given a total of $13,500.

With the exception of the two recent virtual fundraisers, all the contributions listed above were made before the coronavirus outbreak, though the latest round of FEC filings only covers contributions through March 31. The timeline and connections, however, demonstrate the blur of the public-private revolving doors whirling at the White House.

Hagerty faces two main challengers in his Tennessee race to replace retiring Sen. Lamar Alexander: In the Republican primary, he is heavily favored over physician Dr. Manny Sethi, and in the general election his likely opponent will be Democratic attorney and Iraq War veteran James Mackler.

"Offering insider information all Tennesseans need to know in exchange for campaign donations is exactly what's wrong with politics and why Tennesseans are looking for new leadership," Mackler said in a statement. "While Bill Hagerty's race is funded by sweetheart loans, corporate PACs, and Washington special interests, my campaign is fueled by thousands of individual Tennesseans investing to elect a combat veteran who will do what's right and stand up to any president when they're wrong."

Hagerty was initially a Tennessee delegate for Jeb Bush in 2016, but later threw his support to Trump, serving as chair for the Tennessee branch of Trump Victory. In August of that year he was named director of appointments for the Trump transition team. He was sworn in as U.S. ambassador to Japan — a position that had gone vacant for months — on July 27, 2017.

On July 12, 2019, Trump tweeted, "Tennessee loving Bill Hagerty, who was my Tennessee Victoy [sic] Chair and is now the very outstanding Ambassador to Japan, will be running for the U.S. Senate. He is strong on crime, borders & our 2nd A. Loves our Military & our Vets. Has my Complete & Total Endorsement!"

Four days later, Hagerty announced he would resign his ambassadorship and seek the Senate seat, which opened following Alexander's announcement that he would not run again in 2020.

Hagerty's replacement as ambassador, Ken Weinstein, is CEO of the Hudson Institute, where he interviewed Hagerty at an event last April.