In a fitting finale, "The Good Fight" makes the case for nipping Jeffrey Epstein whodunit in the bud

"The Gang Discovers Who Killed Jeffrey Epstein" wasn't supposed to be the season finale, but it's an apt one 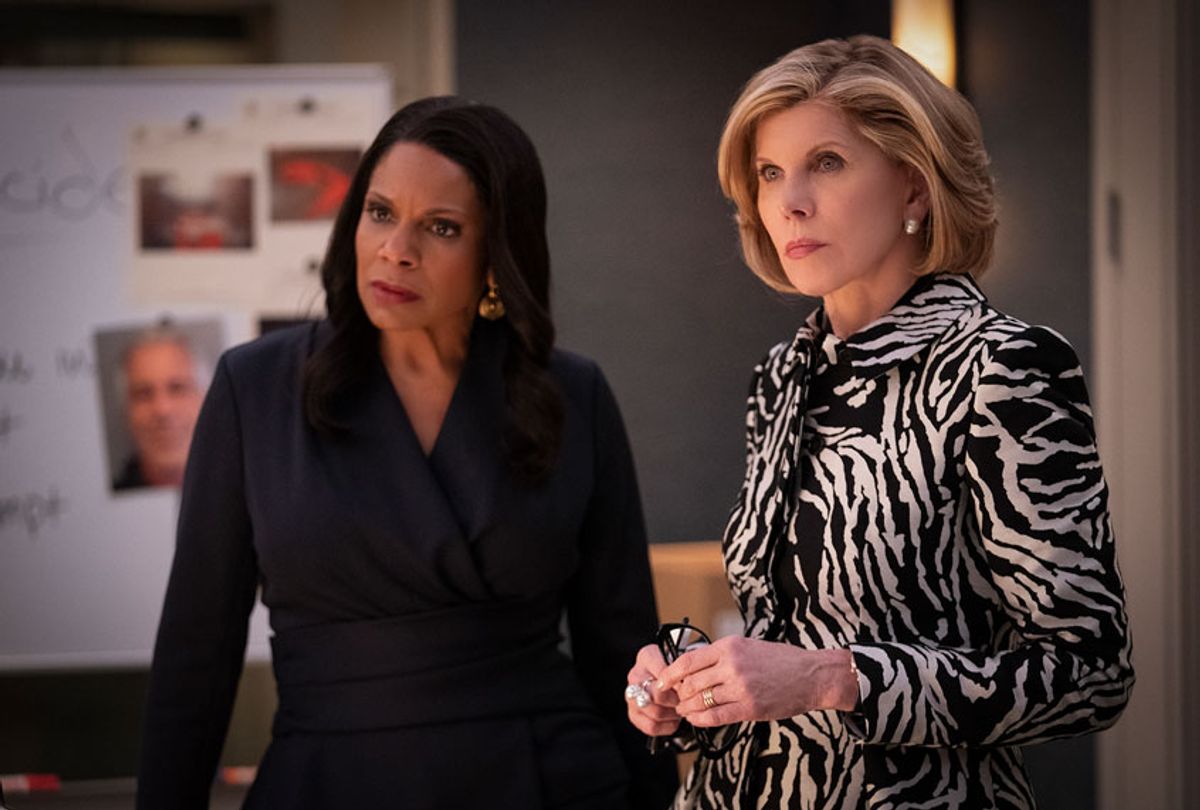 Call it kismet, if you like. Usually the circumstances inspiring that term's invocation are poetic and positive. Colored thusly, it might not seem right to apply the world to the circumstances surrounding the unintentional fourth season finale of "The Good Fight" because production had to halt on the drama when the pandemic sped up its nasty sweep across the country and the globe. In a pre-COVID-19 world, creators and showrunners Robert and Michelle King had scripted three more episodes that did not get shot.

But ending a conspiracy-driven season with "The Gang Discovers Who Killed Jeffrey Epstein," its seventh episode, is apt if not ideal. Circumstances forced this episode to transform from one of the series' fictionalized departures into a stranger-than-fiction real story into – if not the last word on this arc – a cliffhanger at least. And the coincidental timing of its debut is remarkable, arriving in the same week as the debut of "Jeffrey Epstein: Filthy Rich" on Netflix and the "Who Killed Jeffrey Epstein?" special on ID.

The producers acknowledge these strange days and the crimes born from corrupt leadership in other ways, too. They replaced the drama's operatic theme with John Prine's "My Old Kentucky Home, Goodnight" to open the finale. They did the same with the sixth episode, featuring Fountains of Wayne's "Hey Julie." Both were tributes since Prine and Fountains of Wayne's Adam Schlesinger both died of complications linked to COVID-19.

Remember, though, that Reddick, Boseman & Lockhart partner Diane Lockhart (Christine Baranski) ushered us into this latest round of fictionalized adventures through the gateway of a nightmare – her nightmare. The premiere dropped us into her dream of an alternate timeline in which Hillary Clinton won the 2016 presidential election, but #MeToo never happened.  Diane, in her dream, was assigned to lead the firm's defense of Harvey Weinstein which, understandably, made her apoplectic.

Capping off this round, "The Good Fight" going down the conspiracy water slide surrounding Epstein's death creates a convenient if coincidental bookend. Two of the biggest stories within this era of women shedding light on the sexual abuses inflicted by powerful men are acknowledged in this fourth season.

The "gang's" services are retained by U.S. Attorney Wilbur Dincon (Adam Heller), who tasks the firm with hunting down the truth of how Epstein died in his jail cell last August while awaiting trial for sex trafficking charges, promising more work if they solve the case. The financier's official cause of death is suicide by hanging, but some believe he was killed.

Commence a wild airing of multiple conspiracy theories by way of a firm-wide tumble down some of the same conspiracy worm holes torn open on Reddit and 4chan, spearheaded by Liz (Audra McDonald). Some of them, and the evidence supporting them, were ginned up by the writers. But the kookiest details are connected to true stories.

One draws a connection between Epstein and Attorney General William Barr by way of a book written by Barr's father Donald titled "Space Relations," which is about child sexual slavery in space. The book actually exists.

Another branch of the path opens up by way of breaking down Epstein's obsession with transhumanism and seeding women with his DNA to create a "superior" breed of human, which also happens to be true.

The point of all this craziness, though, is to illustrate how efficiently evil works to distract the average person. While Liz and the associates are neck deep in digging through evidence, decoding odd messages ,and constructing an impressive crazy wall in the company's conference room, the other two name partners, Diane and Adrian (Delroy Lindo) are informed by their icy-blooded overlord Gavin Firth (John Larroquette) that they need to cut a fifth of their staff.

As for the season's core mystery, concerning a secret directive known as Memo 618 that renders the rich and powerful legally bulletproof, we don't get to the bottom of what the memo is or which entities are behind it. That will have to wait until the fifth season, whenever that airs. And when it does, the conspiracy's relevance and accompanying subtext will probably hold.

Part of the "to be continued" aspect of this storyline shows Julius Cain (Michael Boatman), a newly seated federal judge, being arrested on cooked-up charges after going to the Office of the Inspector General, hoping to blow the whistle on the memo's existence. Nearly everyone else is so glued to figuring out what really happened to Epstein that they barely notice the figurative guillotine being constructed in their midst, let alone dream their own heads might roll.

The episode title itself, "The Gang Discovers Who Killed Jeffrey Epstein," is intentionally misleading – the gang doesn't get to the bottom of that mystery but not for lack of extreme effort. They do, however, come close to a shocking discovery when the firm's investigators Marissa (Sarah Steele) and Jay (Nyambi Nyambi) journeying by boat out to Epstein's exclusive island seeking the answer to who, or what a clue identified as "BUD" might be.

The answer, revealed after the duo gains entry to a locked room, is in part a "Citizen Kane" reference but in larger portion a shocking visual commentary on the extreme hubris of the excessively wealthy: "BUD" is the codename for the organ Epstein prized most, kept in cryogenic storage alongside his brain, making for one hell of a season-closing last look.

Amazing, and yet credible. Epstein was a pedophile and, by most accounts, an otherwise unremarkable human save for his connections, libertine privilege, bacchanals, and displays of opulence.

What were we talking about again? Ah yes: distraction. These seven episode of "The Good Fight" illustrate the two tiers of the justice system as it truly exists. Memo 618 is a fictional device made to helpfully explain why men like Epstein and Weinstein and Donald Trump can shred legal norms and do as they please without consequence.

It's much handier for dramatic purposes to give systemic injustice a device to blame as opposed to simply showing the good guys losing over and over again for no other reason beyond the understanding that the judicial branch of government is too thoroughly corrupted for the little guy, or even the relatively well-off, to get a fair shot. And the problem is, the people who have access to power and a sizable bank account are generally fine with this arrangement.

Adrian, a man with a hush-hush invitation to run for president in his back pocket, drops in on attorney's team whirlwind to urge his people to not get caught up conspiracy theories. Law enforcement's failure to hold Epstein's accountable for his crimes, including allowing him to ignore his court-ordered 90-day check-ins like every other sexual predator must do, may simply be an example of government incompetence, he says.

Diane sees it differently. "We all have to obey the law," she says. "If we're told we have to check in with the police every 90 days, we do it. But certain people don't have to. They get special treatment."

She angrily adds, "That is America. That is not incompetence. It's a special f**king off-ramp for the well-connected."

Smartly the writers don't make Memo 618 the season's sole tension, which goes against the established case-of-the-week format; "The Good Fight" is still a CBS-branded procedural at the end of the day. Instead, the sinister Memo is a corporeal representation of the invisible forces whose knees are on our necks and the enabling structures keeping them in place. The season premiere presented itself as a lark and a diversionary ride into an alternate reality but beneath the cynical humor of Diane's twisted dreaming is an indictment of white feminism's enabling of predatory, exploitative patriarchal structures. As long as some people reap the rewards of appearing to achieve parity, that's enough.

But as the plot progresses, the fourth season demonstrates how the various levels of privilege granted to some Americans can be exploited to the detriment of all but the 1%. And this structural decay is made possible by the fact that, like so many in Epstein's inner circle, many of us choose to look the other way.

A desperate Diane asks Dincon, point-blank, what Memo 618 is. He asks her why, and she says, "Jeffrey Epstein's life was built on it."

"Then you have your answer," the U.S. Attorney replies before walking away.

Marissa observes in the finale's closing moments that in all the obsessing over what happened to Epstein, the team (and the audience by proxy) has lost perspective on what really matters in his story, the teenage girls he violated and the justice they're owed but may never receive. "We're chasing a whodunit in the middle of a tragedy," she says.

"The Good Fight" rages at this unfairness as its lights temporarily turn off, leaving its viewers much to contemplate about our part in this imbalance of society's scales. Hopefully that's what will stick with us as opposed to its diversionary tactic of a flashing a dead rapist's BUD.

All episodes of "The Good Fight" are currently streaming on CBS All Access.