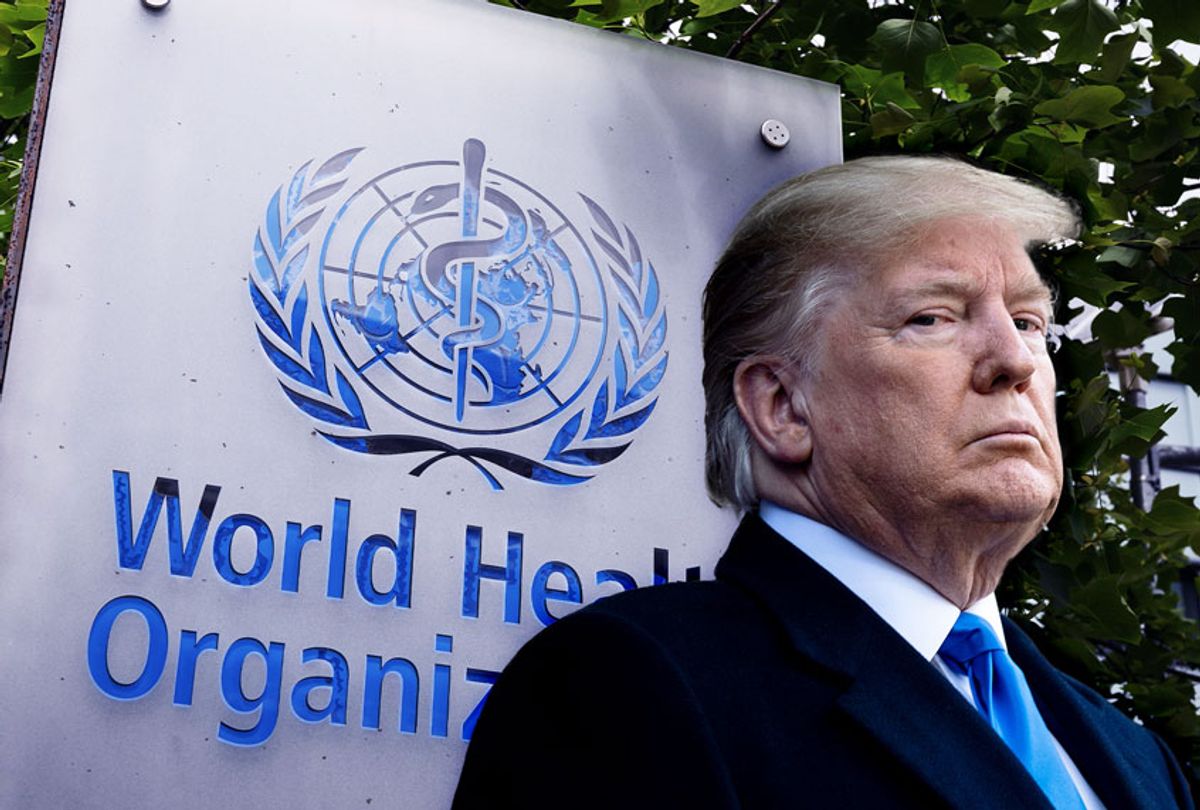 President Donald Trump announced on Friday that he is terminating the United States' relationship with the World Health Organization (WHO), an international public health agency.

In a statement to the press, the president said that the WHO misled the world about the coronavirus pandemic due to pressure from the Chinese government, which he in turn accused ignoring their reporting obligations to the multinational body. The president also noted that the United States government spends $450 million each year on the WHO while China only provides $40 million, underscoring one of the main reasons that the US withdrawal from the WHO is likely to significantly weaken that body. Trump said that he would be "redirecting" the money to "other worldwide and deserving urgent global public health needs," although he did not provide any specifics.

Scientists and public health experts were skeptical that there would be benefits to Trump's decision.

"Our nation's ability to fight and defeat COVID-19 is stronger because of robust, international scientific, medical and public health cooperation and collaboration," Dr. Russell Medford, Chairman of the Center for Global Health Innovation and Global Health Crisis Coordination Center, told Salon. "As one of the world's leading public health agencies, the WHO plays an important role in those international cooperative efforts, not only against COVID-19 but against many other global diseases and health challenges."

"Policies that weaken, rather than enhance, international cooperation, run the very real risk of weakening our own nation's response to COVID-19," he continued.

"President Trump's decision today to pull U.S. support for the World Health Organization is another example of his mismanagement of global affairs," Dr. Georges Benjamin, executive director of the American Public Health Association, told Salon by email. "It not only puts the health of Americans at risk, but it also undermines our other international responsibilities. If there is one thing we have learned from the COVID-19 pandemic, it's that an infectious disease anywhere is a risk to us all everywhere."

Dr. Eric Feigl-Ding, an epidemiologist and health economist at the Harvard Chan School of Public Health and a Senior Fellow at the Federation of American Scientists, expressed a similar sentiment by email to Salon.

"The US withdrawal from the WHO will almost certainly hurt US's soft power abroad and reduce its influence," Feigl-Ding explained. "By disengaging and defunding WHO. It will actual hurt US interests in countless sectors beyond health, from economic investments and national security."

The WHO is part of the United Nations and has its headquarters in Geneva, Switzerland, with six semi-autonomous regional offices and 150 field offices worldwide. Its functions include following chronic global health risks, monitoring potential emergency situations, mobilizing the world in the event of actual crises like pandemics, and advocating for health-related causes like universal health care, improved diet and food security.

Trump has attacked the WHO with increasing ferocity since the coronavirus pandemic hit the United States. When he announced last month that he was halting US funding to the WHO, he made a number of inaccurate statements about the organization. He claimed that the WHO withheld "credible information" about human-to-human transmission of the coronavirus in December 2019, even though they were not aware of the Wuhan outbreak until Dec. 31; that they were guilty of "severely mismanaging and covering up the spread of the coronavirus," even though there is no evidence that this is the case (there is some evidence that China engaged in a cover up); and that the WHO had said the novel coronavirus was "not communicable," even though the agency was always careful in the early stages to say that human-to-human transmission might be possible.

Trump made a number of policy missteps that left America vulnerable to the pandemic. He minimized the threat for two months (from mid-January to mid-March), disbanded a National Security Council pandemic panel, advocated major budget cuts to the Centers for Disease Control and pushed for pseudo-scientific or untested potential cures to the disease.