Why some restaurants are keeping their doors closed in states that have reopened, despite backlash

“I have a huge problem with people choosing profit over people. And I would rather go bankrupt" 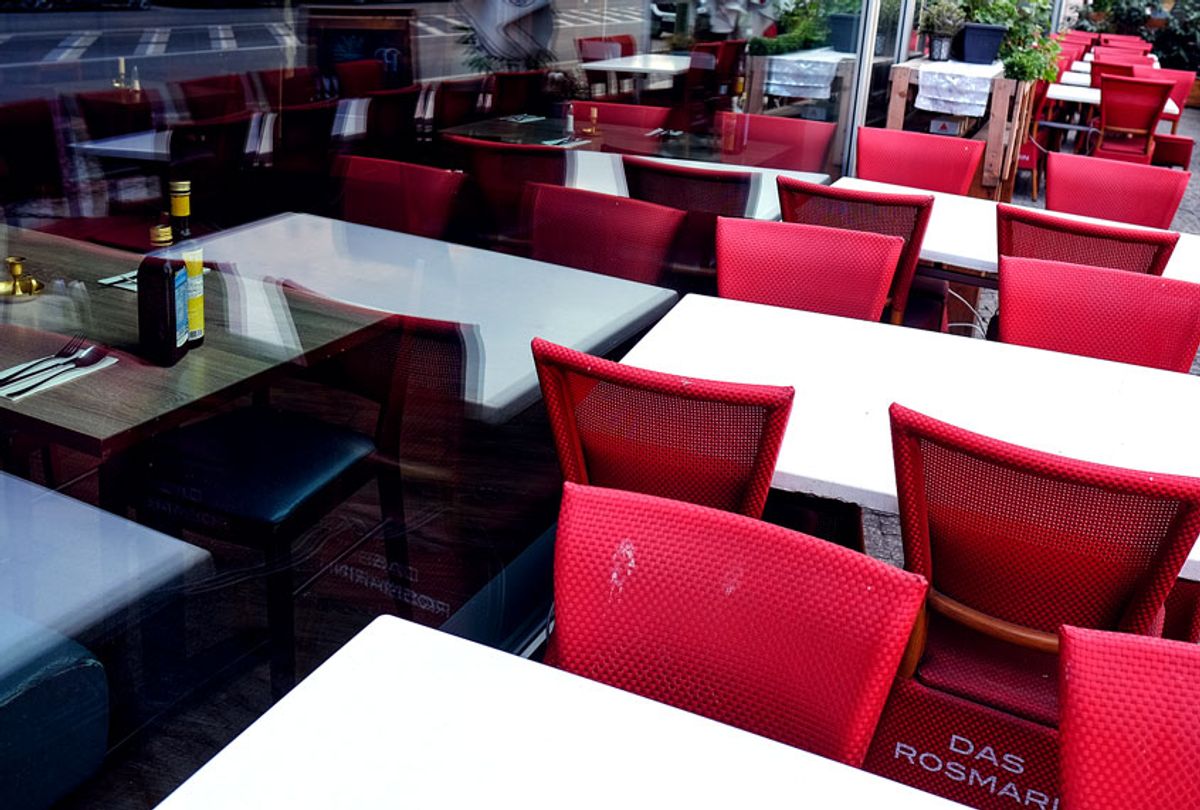 At Pints & Union, a brewpub in New Albany, Ind., a skeleton crew readies for a rush of Saturday evening to-go orders. Save the sounds of that kitchen prep, it doesn't feel much like a restaurant anymore. The smell of beer has been replaced by the smell of bleach, while the wooden booths have long been sanitized and subsequently covered in plastic. Occasionally, a pedestrian tries to open the bright red front door —rattling it against its navy frame — but it's been locked for weeks.

Takeout orders are now called into the restaurant and paid for via phone; once they are ready and the customer is outside, only then is the door briefly opened by a masked and gloved employee who places the carryout bag on a small table nearby to be retrieved.

According to owner Joe Phillips, this is the way Pints & Union is going to operate for the foreseeable future as a way to prevent the continued spread of the novel coronavirus. This is despite the fact that Indiana Governor Eric Holcomb cleared all restaurants in the state (save those in three "hotspot" counties: Marion, Lake, and Cass) to open at 50% capacity as of May 4.

"There's a lack of testing in southern Indiana," Phillips said. "There's only one place you can get tested locally — it's the health department — and it's only open on Saturdays from 11 to 1, and you have to have symptoms. So no one is getting tested."

However, in late March, the chief medical officer at Baptist Health in New Albany called Floyd County, in which the city is located, a "hotspot for the coronavirus" after over 20 people tested positive.

The amount of unknowns about the virus and its spread is, Phillips said, his largest deterrent against reopening.

"I have a huge problem with people choosing profit over people," Phillips said. "And I would rather go bankrupt."

After the novel coronavirus was declared a global pandemic by the World Health Organization on March 10, most states quickly mandated the closure of restaurant dining rooms and restricted what services they could provide as a way to curb the spread. Many restaurants attempted to pivot to takeout and delivery only, while others transitioned to a completely different model, like reopening as a corner store or bodega.

All told, 45 states — including Alaska, Wyoming, South Carolina and Delaware — have since lifted or relaxed restrictions on restaurants selling to-go alcohol and cocktails as a way to boost profits.

Regardless, the global financial services firm UBS predicts that one in five restaurants could close permanently as a result of lost income during the pandemic, while an April report from the National Restaurant Association found that 11% of surveyed restaurant owners said they would likely close within the next month.

Additionally, in the wake of protests surrounding the killings of George Floyd, a 46-year-old black man who was suffocated by Derek Chauvin — a white Minneapolis police officer — and Breonna Taylor, a 26-year-old black woman who was fatally shot by Louisville Metro Police Department, many cities across the country have instituted mandatory curfews. While many restaurant owners have voiced their support for the protestors, this loss of evening business is another challenge to navigate amid the pandemic shortfall.

The restaurant industry is one that runs on infamously thin profit margins — ranging, typically, between 3-15% — so for many owners, every week they are closed to full-capacity dining brings them a step closer to permanently shuttering.

But Phillips is not the only one making the tough choice to opt out of reopening as soon as their states allow, even while many of his neighbors do.

Ryan Rogers is the owner of the Louisville-based hospitality firm HiCotton Hospitality — their brands include three of Rogers' own restaurant concepts: his fast-casual Feast BBQ and Royal's Hot Chicken, along with bar Vetti, which provides table service.

According to Rogers, he too is dissuaded from reopening his dining rooms right now because of the lack of a vaccination, as well as the limited access to testing.

"We do know that enclosed interior dining spaces will trap air and that our guests can't eat or drink with their masks on," Rogers said. "We also know that our team members did not sign up to be essential workers and potentially risk their health and safety to serve our guests. Based on the information we do know and the information we don't know, from a human perspective it doesn't make sense for us to risk the safety of our team members or our guests by allowing anyone to dine inside of our restaurants at this time."

Additionally, reopening under Kentucky's current guidelines — which allow restaurants to reopen at 33% capacity — does not make sense for Rogers' businesses from a financial perspective.

"In our market, our restaurants are only able to be profitable because of a ratio of sales volume to staff," he said. "To staff a restaurant with the increased staff necessary to control the capacity, as well as 'police' the actions of our guests, would impact this ratio in a way that would not be fiscally responsible and would potentially lead to a greater loss of revenue."

Restaurant owners in other states that are allowing businesses to open at full or limited capacity have reported that they aren't sure the health risk of opening is actually worth the potential financial reward. In Texas, Governor Greg Abbott allowed restaurants to reopen at 25% capacity on May 1.

The Cavalier, an East Austin restaurant and bar, has remained closed to in-person diners, shifting completely to takeout. The owners are looking at a potential June 1 reopening date.

"Governor Abbott has emphatically placed the responsibility and enforcement of safety and protocol onto the restaurant owners," Rachelle Fox, co-owner of The Cavalier, told Eater in late April. "To open our doors in an effort to serve up to 25% of our capacity does not help our business."

In Georgia, award-winning chefs Ford Fry, Anne Quatrano, Hugh Acheson, and Mashama Bailey launched the "#GAHospitalityTogether" initiative in early May. In the Atlanta area, 120 restaurants refused to reopen their doors, despite Georgia Governor Brian Kemp lifting many of the state's shelter-in-place guidelines.

"We agree that it's in the best interest of our employees, our guests, our community and our industry to keep our dining rooms closed at this time," read a statement from the group which was published as an ad in the Atlanta Journal-Constitution. "Recognizing that each operator faces incredibly difficult decisions on the path ahead, we affirm the fact that public safety is the top priority as we navigate this challenge. These uncommon times call for uncommon leadership. We stand united in our resolve to emerge stronger, safer and more steadfast than before."

Restaurants taking a stand against reopening have divided both patrons and fellow restaurant owners.

While the comments sections on social media posts about delayed reopenings remain largely positive, some customers use it as a forum to express their frustration. Often, those comments are political in nature. "They better not get a dime of any future bailouts," one commenter wrote in response to the #GaHospitalityTogether hashtag; "These restaurant owners must have so much money that they don't need workers and staff. Workers don't need money and we don't need an economy. So f**k Trump right?" wrote another.

Phillips has experienced similar pushback from a few restaurant owners in his own community.

"I got made fun of by a couple of local business owners actually on Facebook, and then they deleted it," he said. "Basically saying that 'all of the sudden your business has morals?' Well, yeah. I think my business has always had balls. We don't over-serve people. I make sure women are safe here, intoxicated at nighttime. Families are safe here. The gay community is safe here, it goes on and on."

He acknowledges that he's lucky his landlord is currently flexible and the business doesn't have a ton of debt.

"But there's no guarantee," Phillips said. "You know, some of the owners, sadly, have made this an envy thing, like what I'm saying makes them look bad, so they're projecting. You know, I've always said I assume that all the owners will handle their situation as best as possible."

While these restaurants are opting out of reopening to in-person diners now, they still have an eye on the future. Merging an increase in carry-out orders with their past business plans is part of that.

In Louisville, Ryan Rogers says that he is lucky in that the majority of his restaurants had already been doing at least some percentage of their sales volume in online ordering and takeout prior to the mandatory shutdown of their dining rooms.

"For those restaurants we were able to quickly pivot into pushing all transactions online or over the phone and we've spent the past few weeks attempting to continuously optimize that process so we can put correct orders out more efficiently, which leads to our ability to increase volume," he said.

And, as curbside takeout has become the "new normal," Rogers has experimented with testing and rolling out limited-time offerings that are only available on certain days and times, like sandwich specials and weekend brunch options.

"The revenue that is driven by these offerings during off-peak hours helps us to justify the increased labor costs," he said.

Carryout wasn't the standard at Pints & Union pre-pandemic — "I didn't think our food traveled well, but maybe that was just an excuse we'd tell ourselves," Phillips said — but it is now.

In the face of this grim prediction (which many scientists have made as well), many restaurant owners also recognize the industry itself needs to shift in some pretty substantial ways to remain viable.

For instance, the pandemic has seen large food suppliers — like commercial-scale farms and meat processing plants — stutter to a halt due to coronavirus outbreaks among their employees. Meanwhile, as Salon reported in March, small- to mid-scale local farms that predominantly sold to some restaurants were left with huge quantities of unsold product.

This is a supply chain issue nonprofit organizations like the LEE Initiative, with which Phillips is partnering, are looking to solve moving forward. Per a press release, the LEE Initiative's Restaurant Reboot Relief Program is committing at least $1 million to purchasing food from sustainable farmers in 16 regions and giving that food directly to restaurants in those areas.

"As we were able to help these restaurants survive during the crisis, we realized we'd still be facing a crisis once restaurants were able to reopen," said Chef Edward Lee, who launched the nonprofit. "The entire supply chain is broken and by investing in small farmers, we hope to help to repair it and allow farmers and restaurants to rebuild together."

Additionally, Rogers acknowledges that there isn't necessarily a sole pathway for restaurants to return to normalcy, as "what works for a Subway chain franchisee may not work for Eleven Madison Park," but points to some of the recommendations being made by the Independent Restaurant Coalition.

These include: making sure insurance companies cover business interruption due to COVID-19; creating tax rebates to incentivize employment; creating a stabilization fund; and changing the guidance about the Payroll Protection Program.

"To those, I would add maintaining the ability for many bars and restaurants to sell alcohol to-go in the future, abandoning open container laws, simplifying licensing across the board and raising the minimum wage to a livable wage to help mitigate some of the issues restaurant workers face and to grow the economy by stimulating consumer spending," Rogers said.