Carlson blames Trump's response to protests on Kushner: “No one has more contempt” for Trump voters 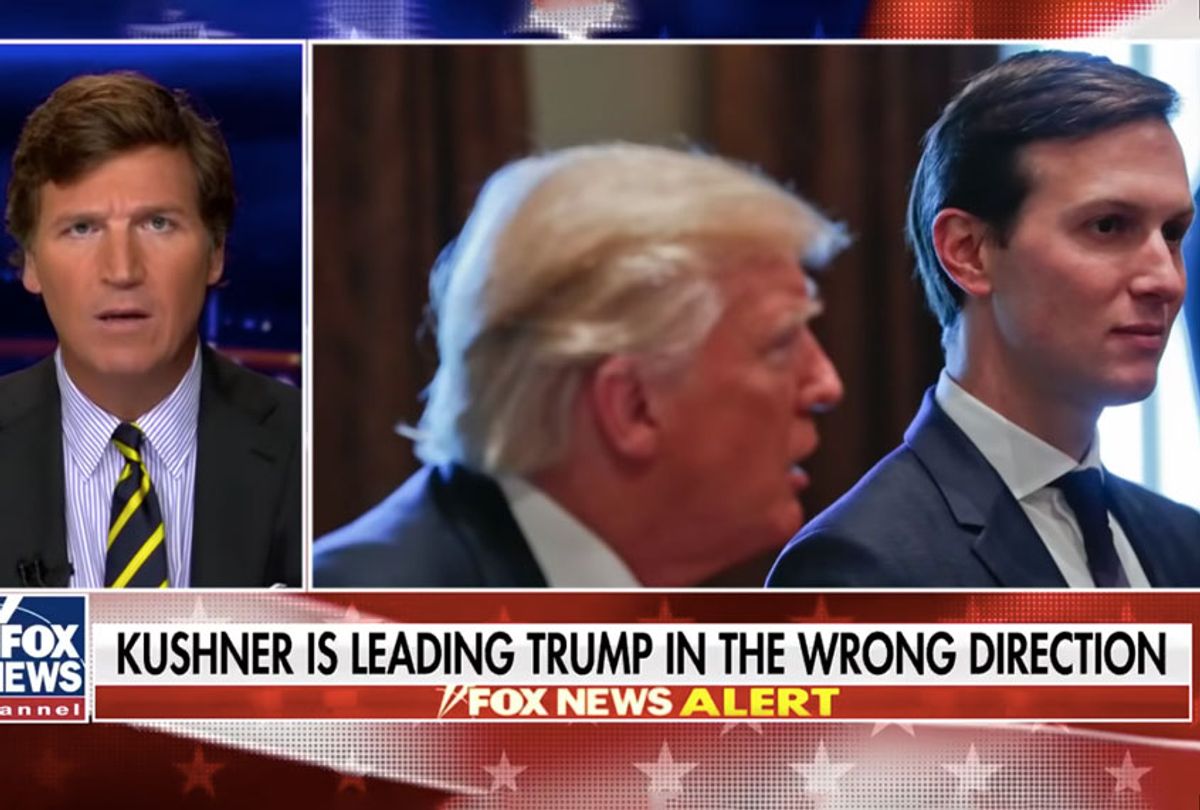 After police backed by the National Guard unleashed tear gas, rubber bullets and flash-bang shells on peaceful protesters to clear the way for President Donald Trump to have his photo taken holding a Bible in front of historic St. John's Episcopal Church, Fox News host Tucker Carlson criticized the commander in chief for being too lenient in stopping the "animals."

Trump on Monday also threatened to deploy the military after criticizing governors as "weak" for not using more aggressive tactics to clamp down on protests over the death of George Floyd. Authorities then used tear gas to clear peaceful protesters and priests from Lafayette Park outside the White House so he could get a photo-op holding a Bible like a championship belt in front of the fire-damaged church. The president was reportedly "upset" after news coverage revealed he had been hunkered down in a bunker.

While many, including the bishop for the Episcopal Diocese of Washington, which oversees the church, were "outraged" by the show of force, Carlson accused Trump's son-in-law and top adviser Jared Kushner of preventing him from being even more aggressive.

"When the mobs came, they abandoned us," Carlson said. "This is how nations collapse — when no one in authority keeps order."

Carlson, who previously argued that looting was worse than police killings, called the protesters "the worst people in our society" and those who committed violence "vicious psychopaths" who were "trying to topple our political system." Carlson had little to say about the wall-to-wall images of force used against peaceful protesters, journalists and bystanders.

"We cannot allow ourselves to become like they are," the host said. "We are not animals — we are Americans."

Carlson, whose monologue on Monday stretched for a half-hour, aired a montage edited to show mostly black protesters breaking into stores and attacking mostly white people which made no mention of the tear gas, rubber bullets or other controversial tactics used on protesters by authorities.

Carlson criticized Democrats, claiming that "these are their voters cleaning out the Rolex store." He also rebuked "so-called conservative leaders" who said everyone should be upset about Floyd's death.

Carlson then aired a clip of protesters chasing a Fox News reporter out of Lafayette Park on Friday before he turned his criticism to Trump.

"If you can't keep a Fox News correspondent from getting attacked directly across from your house, how can you protect my family?" Carlson asked. "How are you going to protect the country? How hard are you trying? On Twitter the next morning, the president reassured America that he and his family were just fine. Their federally-funded bodyguards had kept them safe. He did not mention protecting the rest of the nation, much of which was then on fire. He seemed aware only of himself."

WhileTrump's voters forgive his frequent unforced errors, Carlson argued that they would not forgive weakness.

"The first requirement of leadership is that you watch over the people in your care," Carlson said. "People will put up with almost anything if you do that. You can regularly say embarrassing things on television. You can hire Omarosa to work at the White House. All of that will be forgiven if you protect your people. But if you do not protect them — or worse than that, if you seem like you can't be bothered to protect them — then you're done. It's over. People will not forgive weakness."

But Carlson blamed Kushner for the weakness, arguing that he and other advisers "don't seem to understand . . . the gravity of the moment."

"'No matter what,' they'll tell you: 'Our voters aren't going anywhere. The trailer parks are rock-solid. What choice do they have? They've got to vote for us,'" Carlson said. "Jared Kusher, for one, has made that point out loud. No one has more contempt for Donald Trump's voters than Jared Kushner does."

Carlson's screed from behind a camera stood in stark contrast to his peers, who roundly called out Trump over the threats of military action and unprovoked attacks on peaceful protesters.

"The president seems to think dominating black people — dominating peaceful protesters — is law and order," CNN host Anderson Cooper said Monday. "He calls them 'thugs.' Who is the 'thug' here? Hiding in a bunker, hiding behind a suit, who is the 'thug'?"

Cooper also interviewed Bishop Mariann Budde, who oversees the church where Trump posed after the assault on protesters.

"I am outraged," she said. "Everything he has said and done is to inflame violence. We need moral leadership, and he's done everything to divide us."

Budde later called out Trump for using the church as a prop in an interview with The New York Times.

"He did not pray," she said. "He did not mention George Floyd. He did not mention the agony of people who have been subjected to this kind of horrific expression of racism and white supremacy for hundreds of years. We need a president who can unify and heal. He has done the opposite of that, and we are left to pick up the pieces."