As groceries board up amid protests, food inequality worsens for communities of color 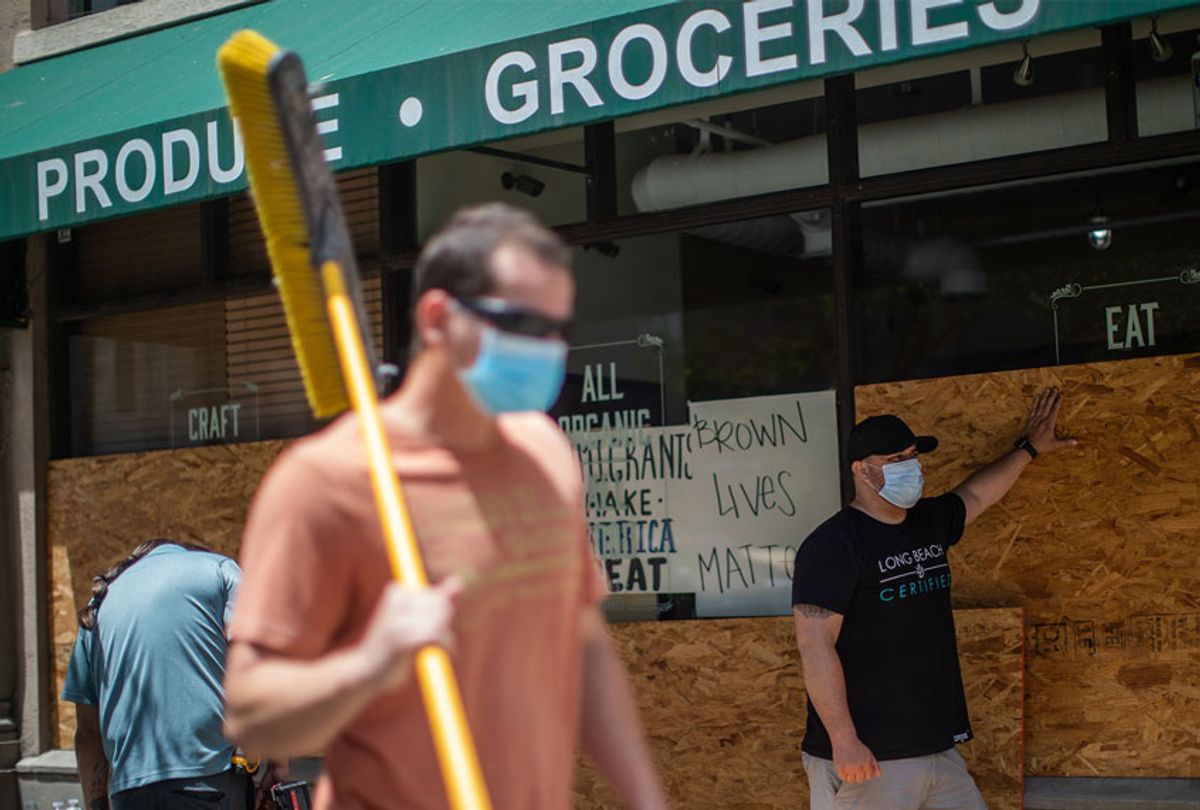 A volunteer carrying a broom passes by a store being boarded up in Downtown Long Beach, California on June 1, 2020, after a night of protests and looting. (APU GOMES/AFP via Getty Images)
--

On Tuesday afternoon, the Kroger at 28th and Broadway in Louisville was boarded up — closed to the public and pasted with bright pink signs announcing reduced hours starting the next day — but the parking lot was packed anyway. A line of cars wove around the perimeter, slowly rolling towards tables set in front of the plywood-covered doors. Community members wearing masks and gloves handed paper bags of groceries and toiletries through the car windows.

Nearby, a group gathered in a small circle around a portable stereo and drum set.

"Somebody sing, 'You lift me!'" a man called into a microphone. "You lift me!" the crowd responded.

As the cars turned the final corner of the lot, they drove alongside a row of grills and smokers, passing through a fragrant cloud of wafting smoke. When they'd emerge, they could see the lot where David "YaYa" McAtee once served up plates of barbecue every night — the same lot where he was killed early Monday morning after Louisville Metro Police and the National Guard shot into a crowd gathered after the city's 9 p.m. curfew.

"YaYa made sure everybody stayed fed," one of the men manning the grill explained. "We're just trying to do the same."

This Kroger, which is located in Russell, one of Louisville's historically Black neighborhood, is one of the only grocery stores accessible to residents in the city's West End.

It had been boarded up Monday in anticipation of protests and potential looting. By early Tuesday, a video began circulating of multiple people running through a side door, pushing carts of items. The Courier Journal reported rounds of gunfire can be heard in the background. The nearby Chase ATM was broken into, as well, as the video shows a group pulling money from the damaged machine.

"There are criminals exploiting this occasion of sincere protest to create destruction and to steal from a business that so many community members rely on for their most basic needs," Louisville Mayor Greg Fischer said in a subsequent press conference. "So come on, folks. We're better than this."

While that Kroger location is reopening this week, some community leaders say the inaccessibility of the limited hours — 8 a.m. to 4 p.m. — are revealing a problem that isn't just temporary. Many people in the community can't make it to the grocery store during that short window and don't have another option close by, highlighting the deep inequality in levels of food access across the city. It's an obstacle with which Louisville leadership will have to grapple even once protests subside.

Cassia Herron is the president of the Louisville Association for Community Economics, an urban planner and an outspoken proponent of food access in the city's food deserts and Black communities, which often overlap.

"We've heard rumors for years that that Kroger was going to close permanently," Herron said. "And there are only two major supermarkets that serve 60,000 residents, and that is one of the stores. So if that Kroger closes, West Louisville will have one supermarket and mostly dollar stores."

Store closures due to looting and protests across the country have sparked similar realizations.

In Chicago, several pharmacies and grocery stores were damaged in the weekend's unrest, leaving many of them shut down indefinitely. Residents of the city's Auburn-Gresham neighborhood, where 96.98% of the population is Black, told ABC 7 Chicago that they were concerned chains like Walmart and Whole Foods wouldn't want to reopen in the community, which is already considered a food desert.

"If you shut down those few stores that are in the community, how long can people go on with that?" asked Father Michael Pfleger of the nearby St. Sabina Catholic Church.

According to a report from the Minneapolis Star Tribune, nine of the city's neighborhoods have "nearly become a food desert" after a Cub, Target, two Aldi stores, and many small markets were damaged during protests. The issue was further exacerbated by the fact that public transit service had been limited amid the demonstrations.

"I've never seen the shelves this empty," Shashana Craft, an area resident, told the Star Tribune. "If people can't get to their grocery store, they should check with churches or support groups offering free food and groceries."

In Louisville, numerous community groups have stepped up to fill the temporary gaps in grocery access. The local nonprofit Change Today, Change Tomorrow raised nearly $40,000 within 24 hours to feed residents impacted by the Kroger closure.

Herron says that work is essential right now, but there needs to be major changes in the city if residents are to ever have more equal access to fresh food. She is in the process of scouting locations for a cooperative grocery store, which will likely be located in one of the city's food deserts.

But in the immediate future, she says city leadership — including Mayor Fischer — needs to deeply consider how they will use any federal funding they receive as part of economic recovery efforts post-COVID-19.

"I know that our local government is actively planning for those funds," Herron said. "And it'll be interesting to see what those local government officials do about people's immediate needs beyond giving away free food."

Herron points out that most people in the city's food deserts spend most of their money on housing and food.

"So what we're advocating for is providing another point of access," she said. "A place that is not going to close the doors when the community needs them most."