"Teargaslighting": With hydroxychloroquine out of news cycle, Ingraham pivots to tear gas trutherism 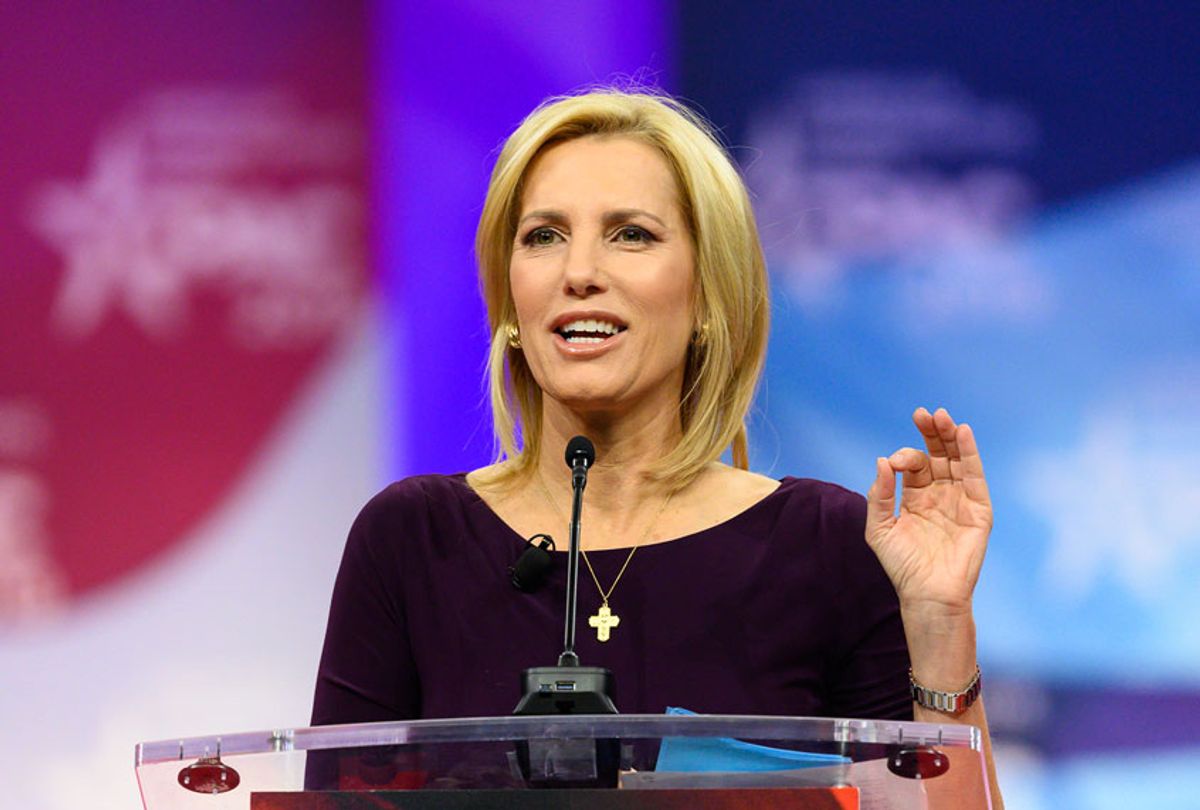 The Trump campaign on Tuesday sought to defend the president's Bible-toting photo-op — which was made possible after police backed by the National Guard dispersed peaceful protesters with tear gas — by claiming that tear gas had not actually been used on the protesters.

Trump mounted the photo-op, in which officials also launched flash-bang shells and rubber bullets, because he was "annoyed" by reports that he had hidden in the White House bunker. Ivanka Trump "urged" her dad to come up with a "more personal way of demonstrating toughness," according to The New York Times.

One day after Trump's team launched a truther campaign about the tear gas, which was captured on camera, the president went full on truther about the origins of the photo-op itself, claiming that he had actually visited the bunker for an "inspection."

Amid what appears to be a new outbreak of "photo-op" trutherism, the revisionist claims went unchallenged by some of the president's biggest supporters at Fox News.

Fox News host Laura Ingraham claimed on Tuesday that law enforcement had not used tear gas to clear away protesters gathered near the White House. That claim came in response to a tweet from David Axelrod, the campaign manager for former President Barack Obama.

"Tear gas & rubber bullets, horses & batons to break up a peaceful crowd across from the WH apparently to clear them out all so the @POTUS could stage a photo op, holding up a bible," Axelrod tweeted Monday.

Live broadcast of the scene clearly showed heavily-armed officials storming Lafayette Square to clear a peaceful protest before Trump walked across the street to get his picture taken in front of a vandalized church. In addition to the tear gas and rubber bullets, one police officer was also filmed punching an Australian journalist.

Ingraham may have sourced her claim from tweets posted by a local WTOP correspondent, who cited an anonymous U.S. Park Police source as saying officers had used smoke canisters. The same source also said the square had not been cleared because Trump wanted to stand in front of the church.

"We now know through the U.S. Park Police that neither they, nor any of their law enforcement partners, used tear gas to quell rising violence," Trump's re-election campaign later claimed in a statement demanding that news organizations "immediately correct or retract" all reporting about the use of tear gas.

CNN national security correspondent Alex Marquardt, who was an eye-witness in the crowd, fact-checked Ingraham's claim as "ridiculous" in a series of replies.

"This 'no tear gas' angle is ridiculous. I was in the middle of a crowd coughing up a lung. All sort of projectiles were being fired at a peaceful crowd," he wrote. "I just watched our raw video from 6:35-7pm. Protesters had taken a knee, chanting 'Black Lives Matter' when the advance started."

"I can't shake this scene of a middle-aged man, clutching his chest and clearly in distress as he was fired on. Protesters rushed forward to help as the firing continued," Marquardt added, including a photo of the man.

Hunter Walker, White House correspondent for Yahoo News, was also on the ground and linked to a video of the crowd being gassed.

"To describe the sensation to you, my eyes are just filling with tears and absolutely stinging," Walker said.

"This is like doubly Orwellian because I was gassed," he added, in reference to the denialists. "These people are literally asking me not to believe what my eyes saw and felt. It's actual teargaslighting."

U.S. Park Police on Tuesday released a statement saying they used "smoke canisters." A reporter at the scene pocketed a canister — a 40mm Skat Shell® OC Round, which according to its manufacturer's website is "a crowd management tool for the rapid and broad deployment of chemical agent" that is "designed to deliver multiple chemical canisters from a 40mm launcher down range to the intended target zone."

"Do NOT fire directly at personnel, as serious injury or death may result," the page warns.

The Park Police statement is correct as long as "tear gas" is strictly defined as "CS" or "CN" agents. However, the Centers for Disease Control and Prevention definition includes a number of chemical agents, such as pepper spray.

According to sales materials on the SkatShell website, one distinction between CS tear gas and the OC round deployed Monday evening is that the OC round has a "more immediate respiratory effect."

Ingraham later asked Media-Ite to correct its fact-check of her "fact-check."

"I was in Lafayette Park on Sunday night when the facilities building was being burned and trashed--the same pepper spray was fired," she tweeted Tuesday. "Not pleasant to inhale but not tear gas. There's a big difference. Correct your article please."

In a Fox News Radio interview the next day, Trump contradicted multiple reports that he had been rushed to a bunker Friday amid raucous protests outside the White House gates by claiming that he just stopped by for an "inspection."

Multiple outlets, including the Associated Press and The New York Times reported that Trump had been rushed to the "Presidential Emergency Operations Center," a bunker which sheltered both former President George W. Bush and former Vice President Dick Cheney during the 9/11 terrorist attacks.

"It was a false report," Trump told the "Fox & Friends" on his radio show.

"I went down during the day, and I was there for a tiny, little, short period of time and it was much more for inspection," the president added to Kilmeade. "These problems are during the night — not during the day."

Trump said it was not the first time during his term that the bunker had merited a once-over.

"I've gone two or three times, all for inspection," he added.

Kilmeade did not challenge the president in a video clip of the interview posted to Fox News. He could be seen nodding his head affirmatively.

But "the facts are simply not under dispute," according to CNN's Chris Cillizza.

"So, why would Trump describe it falsely to Fox? . . . Simple. There is nothing Trump hates more than weakness," he wrote. "And the image of him cowering in an underground bunker while protesters stood outside the gates of the White House is simply not something he cannot accept."