Are protesters and public health officials being pandemic hypocrites? That's not how it works 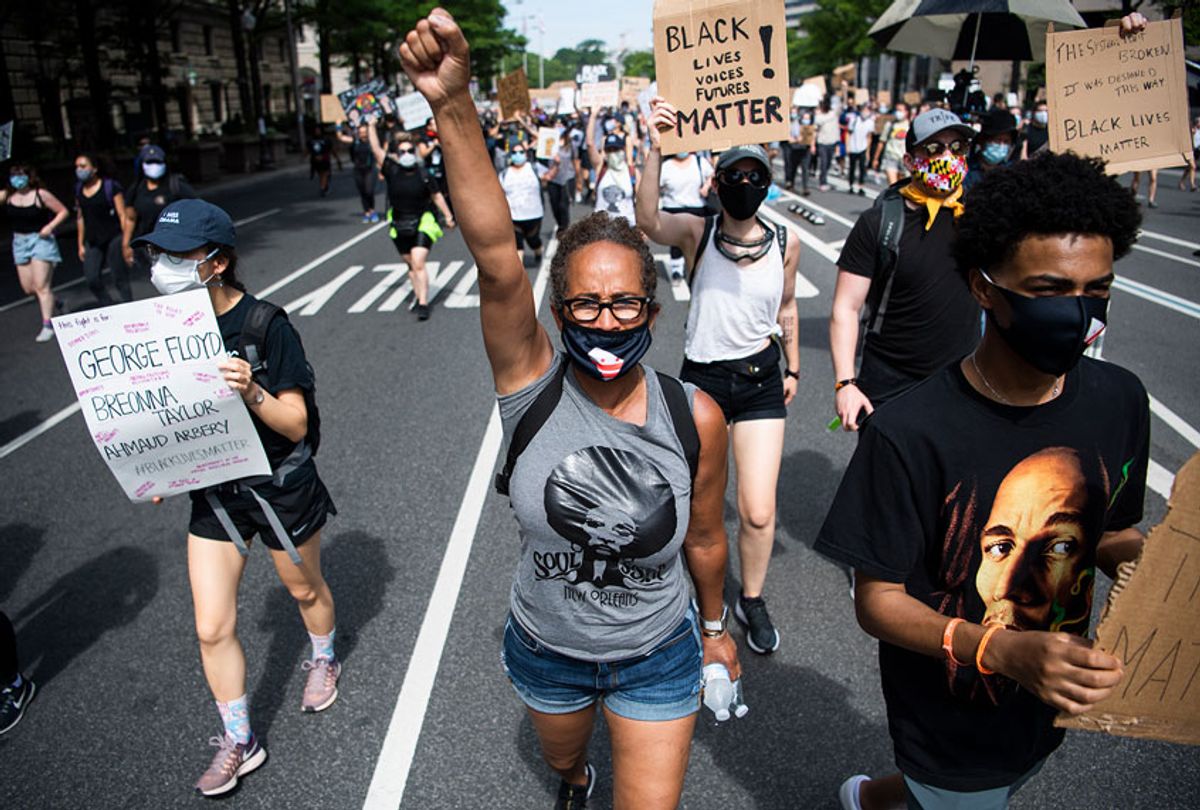 Demonstrators march on Pennsylvania Avenue towards the Capitol to protest the death of George Floyd (Tom Williams/CQ-Roll Call, Inc via Getty Images)
--

Unable to defend the extrajudicial killing of black people by the police or the viciousness of police assaults on peaceful protesters, conservatives are grasping desperately at a new gotcha to discredit the recent national uprisings: Liberals are a bunch of hypocrites. This time, however, it's got a coronavirus twist, as progressives are being accused of hypocrisy for supporting the protests while allegedly opposing all other social gatherings in the name of "public health."

The problem with this gotcha, however, is that it isn't true. There may be a few progressive introverts performing for social media about how they'll never leave the house again. The vast majority have been chafing under many weeks of pandemic lockdown just as much as conservatives. If anything, the protests are proof of this: The urgency and energy we have seen in the streets is fueled not just by outrage at police brutality — which has been a focus of activism for years — but the uncorking of months of energy and anger in response to the failed federal coronavirus response.

Liberals never wanted "forever quarantine." That's a straw man erected by Donald Trump and his supporters. What liberals wanted was an temporary and necessary lockdown to buy time for the federal government to ramp up a testing regime and other health care capacity to deal with the virus.

Trump refused to use the time to do any that, and so it's no wonder the progressives — who are just as fed up with staying home as conservatives — are exploding in the streets right now. Of course the primary reason for the protests is police brutality, and the motivating incident was the police murder of George Floyd. But the anger fueling the movement has many causes, including three and a half years of the Trump presidency and rage at the federal government for failing us so miserably with the coronavirus response.

The piece beneath the headline isn't much better, with sloppy arguments railing against straw-liberals and the blatantly false assumption that public health officials are a bunch of squishy progressives. Diamond appears to have imbibed the flawed premise that officials wanted a lockdown for its own sake, and not as a temporary measure to buy time for a better response — one that never came, due to Trump's malice and incompetence.

Some public health officials have supported the protests, Diamond reports, pointing out that systemic racism is making COVID-19 much worse.

This support is "confounding to many who spent the spring strictly isolated on the advice of health officials, only to hear that the need might not be so absolute after all," he reports in pseudo-objective tones, adding that this apparent contradiction is "particularly nettlesome to conservative skeptics of the all-or-nothing approach to lockdown".

Diamond quotes a Trump health official named Brian Blase accusing public health officials of being "ideologically driven" and saying that "people can only gather for purposes deemed important by the elite central planners." The implication seems to be that health experts were opposed to music festivals and shopping malls on ideological grounds, and seized on the virus as an excuse to shut them down. Yeah, it's a bit of a stretch.

This is a bunch of honking nonsense and sloppy conflation. Public health officials, much less "progressives," never for one moment believed in an "all-or-nothing approach."

"You can't be in lockdown for 18 months," Dr. Michael Osterholm, director of the Center for Infectious Disease Research and Policy, told Ezra Klein of Vox on May 13 — when George Floyd was still alive and no one on the left was considering public protests. "We'll destroy society as we know it, and we don't know what we'll accomplish with it." Does that sound like someone advocating an "all-or-nothing" approach?

On the contrary, as Osterholm told Klein, "What we need is a plan." Not only did Donald Trump fail to provide any sort of plan, he repeatedly got in the way of letting other federal officials create one either.

Why did that happen? The reasons are complicated, but can be boiled down to a twofold problem. First, Trump himself didn't want the increased testing that would be necessary to reopen safely, because he feared testing would make him look bad. Second, the Republican Party, which controls the Senate, has been narrowly focused on trying to block any and all efforts to ease the economic pain of the lockdown, and simply didn't bother formulating a public health response that would allow states to end the lockdowns.

"How can a health expert look those people in the eye and say it was worth it now?" Diamond quotes right-wing writer Drew Holden, who launched a viral Twitter thread making similar arguments.

That's an easy one: Health experts can say that the public largely cooperated with lockdown procedures and bought the federal government some time, which the Trump administration squandered through its usual combination of corruption, incompetence and outright hostility to public well-being. Republicans in Congress also failed us by refusing to pass robust relief packages to make sure that the country was able to both avoid economic ruin and save lives.

In reality, since there's no federal plan to safely reopen the country, Democratic politicians and public health experts have been shifting gears, looking for a way to end the lockdowns — which no one believes can go on forever, no matter what conservatives claim — in a way that minimizes the pain.

Some states — like New York, California and Kentucky, which have also seen some of the biggest protests — have had success at implementing state-level policies to slow the viral spread that allow for gradual, phased reopening. Contrary to whatever straw men conservatives may erecting, Democratic officials are acutely conscious of the economic and psychological cost of lockdowns, and have moved to allow small gatherings and some business reopening as soon as it was safe. It's not their fault that incoherent or nonexistent federal response made that much harder than it needed to be.

In the meantime, public health experts have realized that there's no federal plan to deal with this pandemic, and there won't be until there's a Democratic president. So they've begun a conversation about shifting away from lockdown toward a model that balances people's genuine need for human contact with efforts to limit the viral spread. Coupled with new research illuminating how the virus is spread — and under what conditions it doesn't — that should allow for a much more nuanced strategy than the "all-or-nothing" approach Diamond accuses public health officials of embracing.

"We failed, with a lack of testing largely to blame," public health expert Dr. Leana Wen wrote in the Washington Post on May 13, describing the federal response to the coronavirus. Since that was the case, she continued, it was time to figure out "how best to reduce the harm it is certain to cause" to reopen society even without widespread testing.

The choice "between staying home indefinitely and returning to business as usual now is a false one."  Julia Marcus, professor of population medicine at Harvard, wrote on May 11 for the Atlantic. "Risk is not binary." Policy makers and health experts, she noted, "can help the public differentiate between lower-risk and higher-risk activities."

In the spirit of this new approach, Vox, with the help of Marcus and Eleanor Murray of Boston University, put together a color-coded risk assessment chart meant to help individuals, governments and institutions figure out how to balance people's need to get out of their houses with the need to control the virus. New scientific information gives us reason for cautious optimism that wearing face masks and favoring outdoor over indoor gatherings will help reduce the risk of transmission.

The social distancing at anti-police brutality protests has been less than ideal, and there's no way around that. But most protesters have done well at incorporating other public health guidelines into the protests. Generally speaking, protesters are wearing masks, using hand sanitizer and staying outdoors. Public health experts like Dr. Wen have offered advice on how to protest while reducing the risks.

The implicit or explicit desire of conservatives who touting this "hypocrisy" line is to use the coronavirus as an excuse to crack down on protests. That should be seen as nothing but bad faith. The risks of outdoor-oriented and mask-heavy protests appear manageable, compared to the risks of arresting protesters by the dozens or hundreds and cramming them into jail cells where the virus spreads like wildfire. If slowing the virus is the goal, the last thing we need is mass arrests.

The relationship between liberal support for public health efforts to slow the virus and liberal support for the protests simply isn't reducible to "hypocrisy." For one thing, the premise that progressives have enjoyed the lockdown, or relish the economic damage it has caused, is ludicrous. Progressives have led the way on demanding more testing and more government relief, both of which would have shortened the lockdown period and lessened the trauma.

Moreover, it's likely not a coincidence that the protests erupted shortly after it became clear that the Trump administration will never take the measures needed to safely end the lockdowns. People are furious to realize that we sacrificed so much and the opportunity was wasted by the lazy sadist in the White House, along with his enablers. It seems clear that anger is folded into the long-standing anger over police brutality.

In fact, police brutality and the federal failure on the coronavirus are symptoms of the same disease: A widespread hostility among right-wing political leaders toward the public they're supposedly hired to serve. The uprising of 2020 is largely a matter of the public's seething anger toward those so-called leaders finally boiling over.