"It appears they want to ensure that people who protest are susceptible to the ... deadly pandemic," the group says 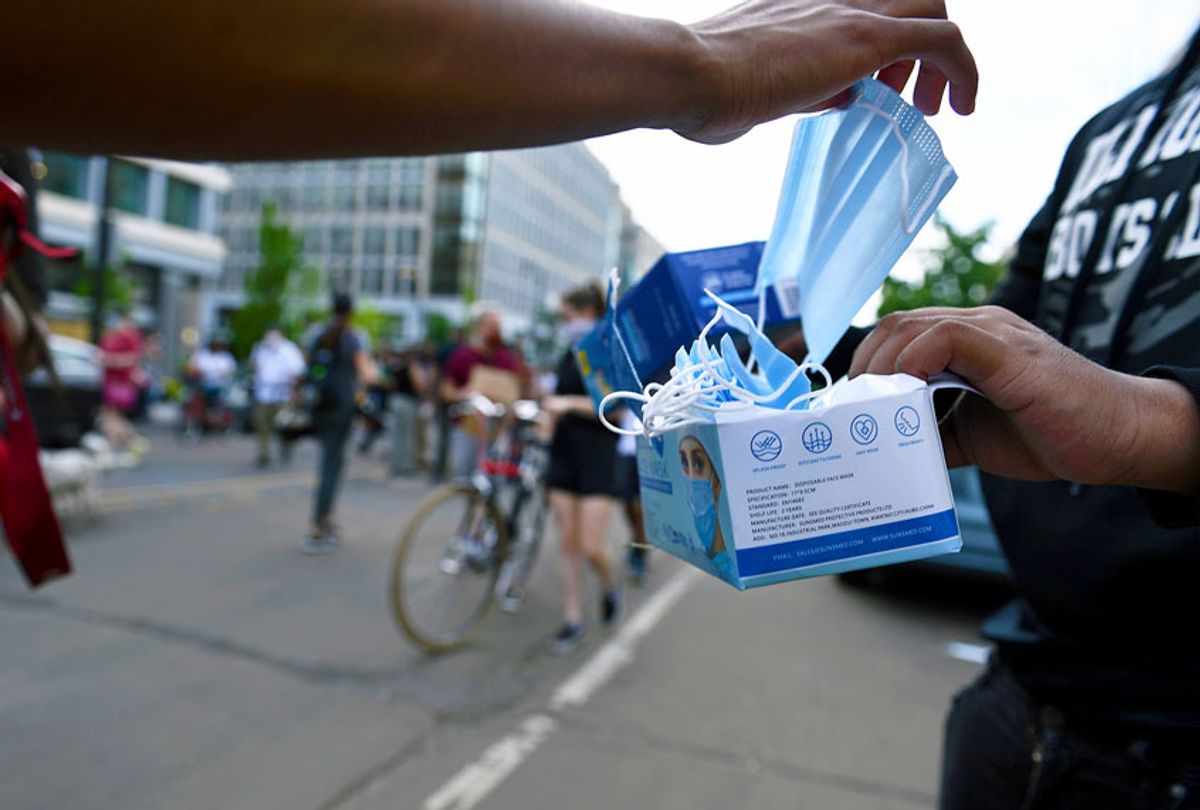 A person gives aways face-masks to people during a demonstration over the death of George Floyd, who died in police custody in Minneapolis, near the White House, in Washington, DC (BRENDAN SMIALOWSKI/AFP via Getty Images)
--

The U.S. Postal Service told a Black Lives Matter-affiliated group that face masks it sent to protect protesters from the new coronavirus were seized by law enforcement, according to a new report.

The Movement for Black Lives bought tens of thousands of dollars worth of masks they planned to distribute to protesters marching against George Floyd's death and police brutality across the country, HuffPost reported. But the first shipment of 2,000 masks sent from Oakland to Washington, St. Louis, New York City and Minneapolis never left the state.

The USPS tracking numbers indicate that the masks were "Seized by Law Enforcement," according to HuffPost's Ryan Reilly, and urged the group to "contact the U.S. Postal Inspection Service for further information."

The Oakland custom printing shop Movement Ink said on Instagram that they have not been told why the shipment was seized.

"Law enforcement has seized these masks and are not stating why!" the post said.

Rene Quinonez, who works at the shop and spent days making the masks with his family, told HuffPost that the shipment was just like any other he had sent in the past.

"I have shipped a lot of stuff before. It's an inside joke that I'm always shipping a ton of stuff, usually next-day or two-day and paying some ridiculous fees," he told the outlet. "These guys know that I ship apparel. There was nothing out of the ordinary."

Quinonez said he could not understand why the shipment was seized.

"I just don't understand it. It's just really blowing my mind," he said. "We're tired, but we're going to try to rally some support and figure out how to replace these masks and how to support the movement. This isn't a weapon. It's more about safety. We're trying to figure out how to keep our community safe."

The Movement for Black Lives is a coalition of more than 150 leaders and organizations "unified in a radical vision for black liberation and working for equity, justice and healing." The group was launched in 2014, after protests in Ferguson, Missouri, over the police killing of Michael Brown.

"Police have rioted coast to coast, beating and gassing protesters who have called for an end to police violence, with the explicit approval of President Trump," Chelsea Fuller, a spokesperson for the group, told HuffPost. "Now, it appears they want to ensure that people who protest are susceptible to the same deadly pandemic that they have failed miserably at stopping. The continued surveillance and disruption of social movements under this administration is as chilling as it is dangerous. It should be roundly condemned."

The shipment was reportedly seized as Robert Redfield, the director of the Centers for Disease Control and Prevention, warned of the risk of contracting the coronavirus amid mass protests.

"I do think there is a potential, unfortunately, for this to be a seeding event," Redfield said Thursday during a House hearing. "And the way to minimize it is to have each individual to recognize it's to the advantage of them to protect their loved ones, to [say]: 'Hey, I was out. I need to go get tested.' You know, in three, five, seven days, go get tested. Make sure you're not infected."

Experts have also sounded the alarm over the use of tear gas by authorities amid the pandemic.

"This is a recipe for disaster," Sven Eric Jordt, a researcher at Duke University School of Medicine who studies the effects of tear gas, told NPR. "You have this excruciating pain, sneezing, coughing, the production of a lot of mucus that obstructs breathing. Using it in the current situation with COVID-19 around is completely irresponsible. There are sufficient data proving that tear gas can increase the susceptibility to pathogens, to viruses."

A 2014 study by the U.S. Army also found that people exposed to tear gas were more likely to contract a respiratory illness.

"Even the army realized they had done something wrong and that this was more toxic than they thought before," Jordt said.

"I actually think we could be promoting COVID-19 by tear gassing protesters," Dr. John Balmes, a pulmonologist at the University of California at San Francisco, agreed. "It causes injury and inflammation to the lining of the airways."

"If they're coughing, the particles actually emanate and are projectiles that travel about six feet or so and could land on other people," Dr. Amesh Adalja, a professor at Johns Hopkins University and the spokesman for the Infectious Diseases Society of America, told NPR. "This is a way to almost induce the virus to be expelled from people when they are exposed to these agents."