The viral video shows two cops shoving a 75-year-old man to the ground. Blood could be seen coming out of his ear 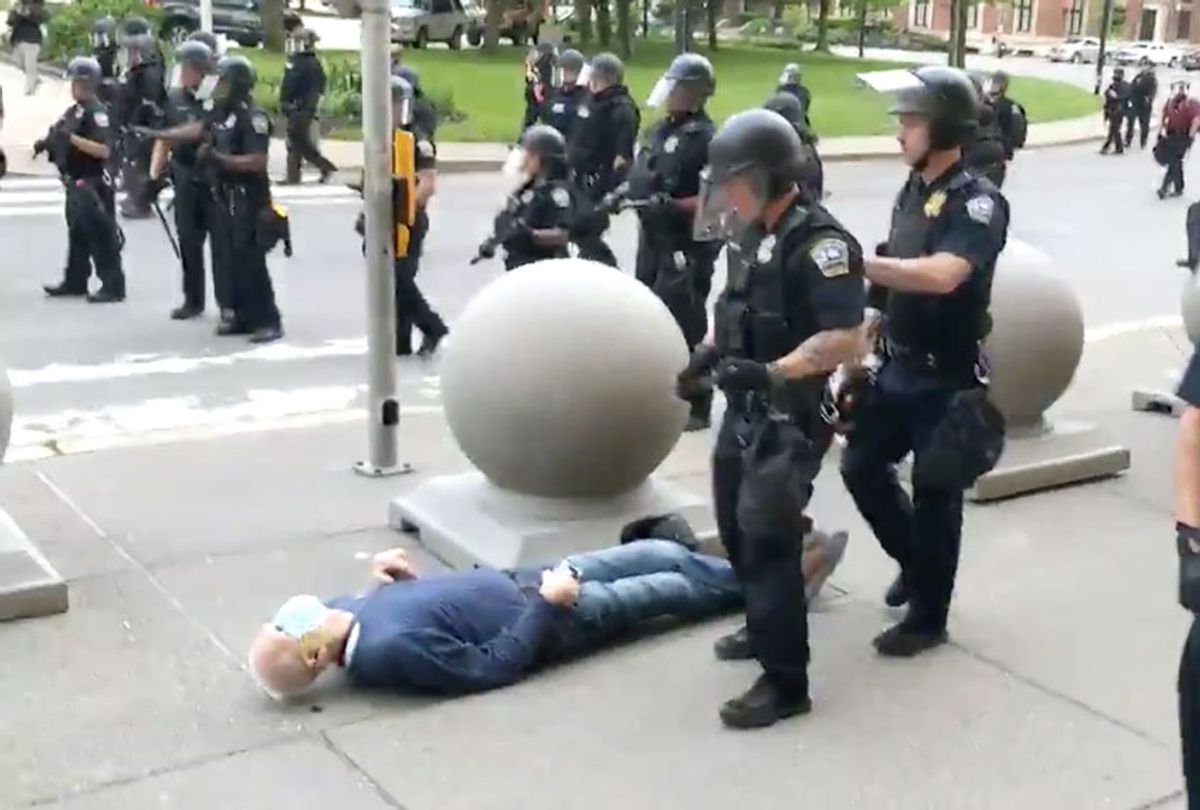 The entire Buffalo Police Department Emergency Response Team (ERT) has resigned from their posts in an apparent show of solidarity for two officers suspended Thursday after a video showing them shove an elderly man to the ground went viral.

The 57 officers did not resign from the police force — only the ERT. Buffalo Mayor Byron Brown confirmed the resignations in a statement, though he did not specify any possible action.

"The city of Buffalo is aware of developments related to the work assignments of certain members of the Buffalo police force," Brown said. "At this time, we can confirm that contingency plans are in place to maintain police services and ensure public safety within our community. The Buffalo police continue to actively work with the New York State Police and other cooperating agencies."

The mass resignations were in support of two ERT colleagues suspended from the police force without pay, sources told the local TV station WIVB. The viral video showed the officers shoving a 75-year-old local peace activist to the ground.

The video, captured by local NPR affiliate WBFO, has been viewed more than 69 million times. The man was later identified by People United for Sustainable Housing Buffalo as Martin Gugino.

The footage showed Gugino, tall, gaunt and wearing a face mask, walk towards an approaching line of ERT officers in riot gear backed by an armored vehicle. Gugino appeared to be recording video on his phone.

Gugino then confronted two officers and spoke to one, appearing to gesture at the officer's billy club with the hand holding the phone. Another officer could be heard commanding, "Push him back. Push him back."

The two officers stepped forward and shoved Gugino, who appeared to hit his head after falling backward. Blood could be seen coming out of his right ear. Someone on the scene yells, "He's bleeding out of his ear."

Buffalo police later released a statement saying the department had arrested a "person during a skirmish with other protestors and also charged with disorderly conduct. During that skirmish involving protesters, one person was injured when he tripped and fell."

Buffalo Police Commissioner Byron Lockwood ordered the two officers suspended without pay after the video surfaced. Brown said he was "deeply disturbed" by the video.

Gugino was hospitalized in serious but stable condition. He is expected to recover.

Gov. Andrew Cuomo, D-N.Y. quickly called on the city to fire the two officers, denouncing the assault as "fundamentally offensive" and "wholly unjustified."

Terrence Bisson, a friend of Gugino, told The Buffalo News that Gugino was "a gentle person who really believes that he must stand up for what he thinks is right." The two work together at the Western New York Peace Center.

"That's why he went to the demonstration," Bisson said. "He would never resist physically any kind of orders. He's a bit frail. Not because of his age — he has some health problems."

The graphic video follows the death of George Floyd in police custody after a former police officer was filmed kneeling on his neck.

The assault on Gugino, an elderly man, is not unique. In Salt Lake City, an officer was captured on live TV shoved a gray-haired man with a cane to the street, and a grandmother in La Mesa, Calif., was rushed to an intensive care unit after being shot between the eyes with a rubber bullet.