This powerful protest movement deserves more from the press: Ask those with power what will change

Journalists have access to the powerful. They must take the protesters' message to those who can do something 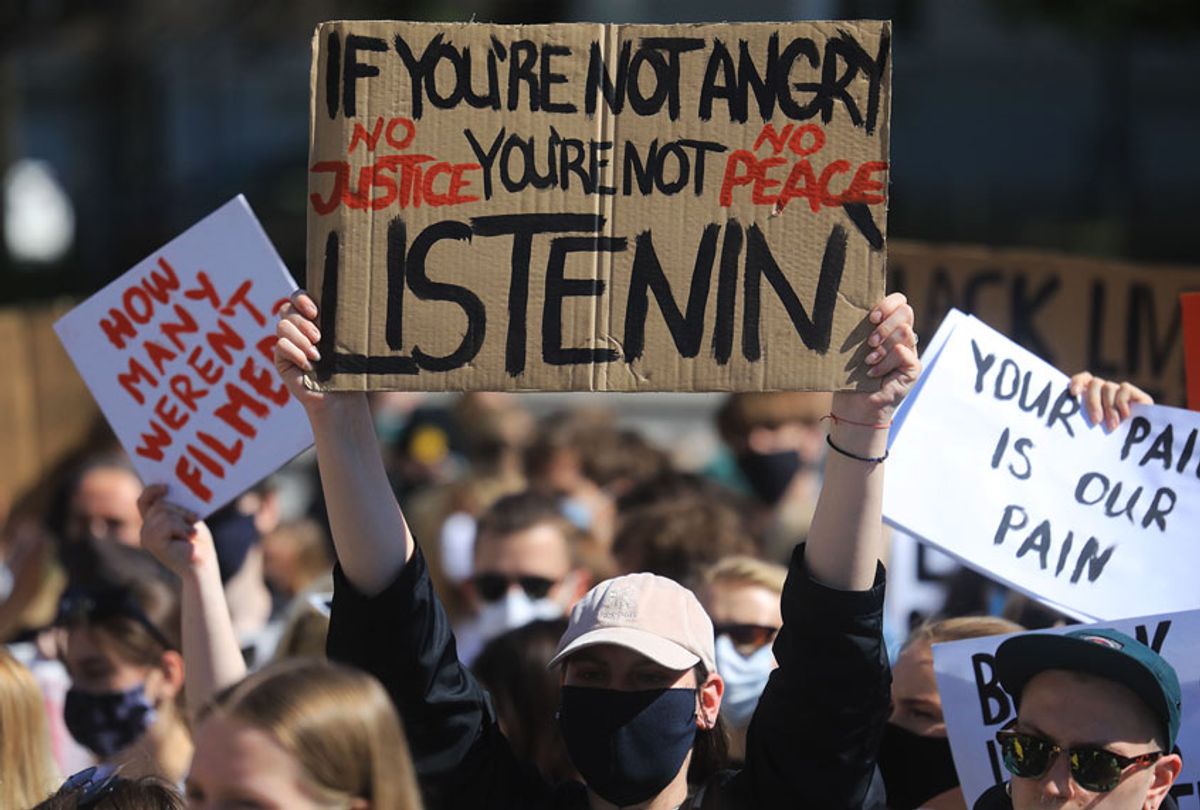 The people pouring into the streets in cities across the nation to protest police brutality and systemic racism are passionately and powerfully calling for change. The violence of the law enforcement response to these largely peaceful demonstrations has turned into a major story in itself, only adding to the moral force of the protesters' message.

Journalists have access to the powerful in way that protesters don't. This is our moral obligation. This is our calling.

Unfortunately, the first instinct for too many political reporters is to just ask the president. But asking Donald Trump or anyone else in his administration what they're going to do to increase racial justice is no use at all. They'll lie, inflame or both. Trump's only interest right now is in fluffing himself up and further dividing the country to rile up his base. The one time he addressed the George Floyd killing at any length, his main message was that Floyd's memory was "being dishonored by rioters, looters and anarchists." He revoltingly endorsed the view that protesters are actually terrorists.

On Friday, he revoltingly suggested that Floyd — the black man whose life was casually snuffed out by a police officer as he begged for breath, the man whose death launched this powerful, passionate movement — was "looking down right now" and celebrating slightly reduced unemployment numbers. Donald Trump has no clue, no empathy, no sense of decency.

Historically, the U.S. attorney general would take the lead here. The Department of Justice used to be in the business of investigating and forcefully addressing not only individual acts of police misconduct but systemic patterns and practices. This often led to consent decrees demanding wholesale changes in police conduct, along with independent monitoring and federal court enforcement. In the Trump era, however, individual cops can occasionally be "bad apples," but police departments can do no wrong. And as far as William Barr is concerned, it's evidently protesters — especially those who oppose fascism — who deserve to be punished, not the police.

What about Congress? Well, Senate Republicans are as usual marching in lockstep behind Trump and have exactly nothing of value to say. House Democrats — when they eventually come back to town — will inevitably pass a few bills that would make changes around the margins. But then they'll let them die without a fight. What's the point of talking to any of them?

Look to the states

The moral center of this country cannot be said to reside in Washington these days. All we have here is chaos.

So when it comes to police brutality and racism, as with so many other important issues these days, if there is an answer, it lies outside Washington.

And as it happens, Trump's vast malfeasance regarding the coronavirus and his ongoing attempts to dump his responsibility on the states have made the nation's governors relevant again.

Many governors have also started making themselves more available to the press. (And thanks to a wonderful news resource, the automated transcription of many news events by the AI-transcription company Rev, their public statements are more accessible than ever.)

Some governors are taking action. Minnesota's Democratic governor, Tim Walz, said on Tuesday that the Floyd killing would be an "inflection point" for the state, and by Friday, the state's Department of Human Rights had launched a civil rights investigation into the Minneapolis Police Department and had already persuaded the department to ban the use of chokeholds and to require police to report and intervene anytime they see an unauthorized use of force by another officer.

New York Gov. Andrew Cuomo acknowledged on Tuesday that Floyd's death was "not an isolated instance." He continued:

It goes back to Rodney King and Amadou Diallo and Abner Louima and Eric Garner and cases just like it all across this country. And at one point, enough is enough and people say, "I can't believe this is still going on after all of this time." Rightful outrage, and by and large, the protesters have been peaceful. They're upset, they're angry, yes, but they have not been violent. They have been peaceful protests. And what do they want? They want overdue reforms. They want reforms that should have been done 30, 40, 50 years ago. They want America to be better.

On Friday, Cuomo announced a "Say Their Name" reform agenda, expected to pass the legislature next week, which includes more transparency for disciplinary records and a ban on chokeholds.

That's a start. But reporters should be relentless in pressing these and other governors to respond to the protest movement's message.

One immediate concern should be police response to the protests themselves. "Rioting police," as New York Times columnist Jamelle Bouie described them, should be held to account. Governors need to push for less militaristic responses to protests, with a goal of de-escalation rather than incitement. And they need to stress that government has a solemn obligation to protect the First Amendment rights of the protesters. They should demand an end to journalists being attacked by the police.

As far as policing in general goes, states could make enormous improvements when it comes to training, adopting detailed and modern use of force standards, and banning of specific tactics. They could eliminate special layers of due process protections for police officers, and make police disciplinary records public.

Republican Gov. Mike DeWine of Ohio on Tuesday committed to working with the General Assembly to set up a state licensing board that could certify and decertify police officers based on their conduct.  That could have powerful ramifications.

States could refuse to accept surplus military equipment — indeed, they could give it back. They could put in place strong accountability and review mechanisms, including independent oversight commissions. States could restructure payouts for police misconduct so that departments feel more pressure to limit it.

Cities, of course, set a lot of the rules for police as well. Former President Barack Obama has called on mayors and city council members to pledge to introduce common-sense limits on police use of force, complete with a handy eight-point checklist reporters can use to hold them accountable.

That list calls for requiring officers to de-escalate situations where possible; prohibiting maneuvers that cut off oxygen or blood flow; requiring officers to intervene, stop and report excessive or unnecessary force used by other officers; ordering officers not to shoot at moving vehicles; limiting the types of force and weapons that can be used to respond in specific cases, and so on.

George Floyd's unbearable death, the flood of heartbroken and angry protesters, and the unapologetically and seemingly endlessly violent response by the police — all coming at a time of unprecedented strain to our society, our democracy, our sense of well-being and our faith in our leaders — have put incredible demands on the nation's journalists simply to tell the stories. But we must also demand responses from those in a position to make things better.